The torment of war and the mental toll combat takes on man is a concept not new to cinema: arguably one of the medium’s greatest tropes, wartime drama reduces characters to primal beasts within its purview and examines the complexity that drives people to kill. Doug Liman’s The Wall, not to be confused with the Matt Damon flick with a similar name, is a taut, slow-burn thriller with a tiny cast and an elegantly terrifying premise, and it maximises the psychological torment inflicted upon Aaron Taylor-Johnson’s poor army spotter as he’s pinned down behind a crumbling desert wall. Strip away all of man’s security and you uncover the real person, behind the facade, faced with imminent death, and The Wall plays to this strength well.

US Army Staff Sargent, sniper Shane Matthews (John Cena), and his spotter Sargent Allen Isaac (Aaron Taylor-Johnson) are deployed to a pipeline construction site in Iraq, following the wind down of hostilities between the US and the insurgency. Scoping out a clutch of dead US contractors, Matthews is wounded critically by a hidden Iraqi sniper, leaving Isaac trapped behind an unsteady wall of stone. Baited over his comms by the sniper, Juba (Laith Nakli), Isaac must use all his ingenuity to survive.

The Wall reminded me of another similarly grounded war film, 2016’s Mine, in which a soldier stands trapped on a mine in the middle of the desert, awaiting almost certain death to come to him. The Wall is basically the same thing, although Taylor-Johnson doesn’t have mines to contend with as he does a sniper’s bullets. Taylor-Johnson has excelled himself as an actor since his breakout role in Nowhere Boy, appearing in Oliver Stone’s Savages, Gareth Edwards’ Godzilla, and as ill-fated speedster Pietro Maximoff in Marvel’s Avengers: Age Of Ultron. He’s obliged to carry this film almost entirely, with WWE star John Cena spending much of its relatively scarce 90 minute running time face-down in the Iraqi sand, motionless. Co-star Laith Nakli never even appears on-screen, manifesting solely as a voice in Isaac’s earpiece and tormenting his victims from incredible distance. 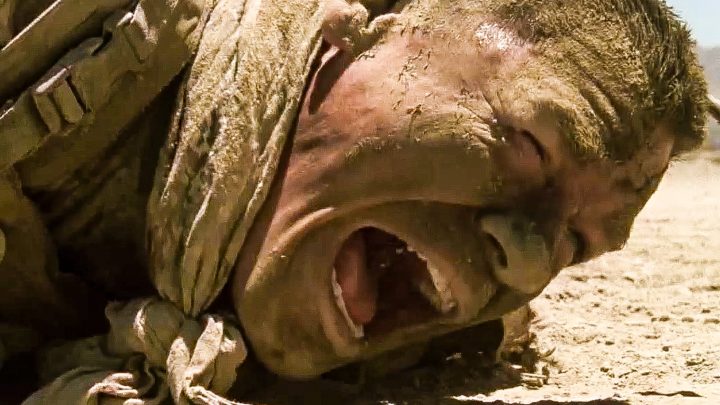 A film like this hangs on Taylor-Johnson’s emotional state throughout, and the actor brings his A-game to bear on the film’s thin plot and sparse characterisation. If you equate dust to conviction, Taylor-Johnson gets absolutely covered in sand and dirt, blood-soaked and sweaty as he spends 80-odd minutes crawling around the base of a scant, ruinous wall. His relationship with Cena’s Matthews feels actively professional, despite Isaac’s sense of humour early on driving his compatriot to distraction, and his rising terror appears to be generated more from being left alone to die than any attachment they have at a deeper level. As his over-the-air conversation with Juba becomes more resigned, then angry, then frustrated, then confident, then resolved, Isaac transitions through the various stages of grief (I guess) as his tormentor goads him on, and while Dwain Worrell’s script doesn’t evince the most convincing spar between ideaologies, nor produce gut-wrenching torturous imagery, Liman’s direction is enough to generate some tension regardless. 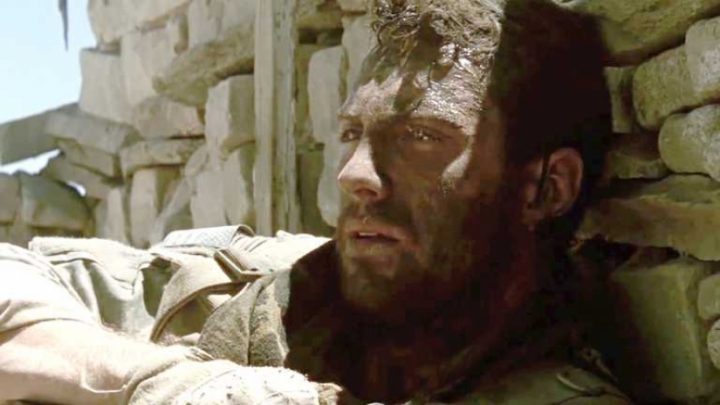 Liman, best known for The Bourne Identity and Edge of Tomorrow (still his best film), ekes out a convincing dramatic work over a bleak and sand-blasted 90 minutes, although one might make an argument that the premise feels a touch thin for even that relatively brief period. The film’s tension doesn’t feel well defined, offering a stumbling sense of rising fear before indifference kicks in from time to time. The waves of crescendo and troughs of desolation never quite link together as they need to in order to keep the audience hooked, and too often I felt detached from the on-screen action when I should have been heavily invested. Perhaps it’s the lack of character backstory given to Isaac, perhaps its his skinflint relationship with Juba and Matthews, or perhaps it’s Liman’s limited capacity to draw much out of all these aspects that makes The Wall feel so isolated from the viewer – it’s a film we’re meant to prickle at Juba’s taunts and Isaacs’ predictably xenophobic responses, but the film feels flat, deflated of all potency by an insufficient motivation for much beyond simple survival. 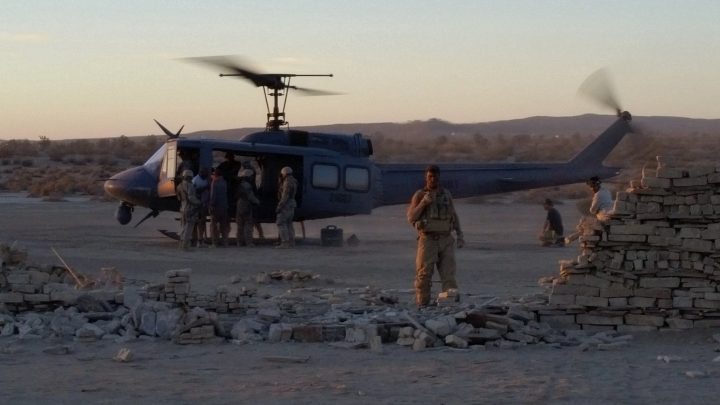 And The Wall is a largely simple affair; despite Liman’s enthusiastic direction and Zemeckis-like editing, and in spite of Taylor-Johnson’s spittle-weary performance, The Wall doesn’t quite hit its marks. A mix of Black Hawk Down, Three Kings and American Sniper, Liman’s The Wall has the best intentions and while sufficient to be commendable, there’s a sense of something missing once the closing credits roll. A nice sting in the tail alleviates the melancholy of the plot, and there’s just enough subtext beneath Juba’s conversational tone to engender some intellectualism, but The Wall’s thin plot and stretched narrative aren’t as compelling as it deserved.