Director :  Guy Ritchie
Year Of Release :   2017
Principal Cast :  Charlie Hunnam, Astrid Ferges-Frisbey, Djimon Hounsou, Aiden Gillen, Jude Law, Eric Bana, Kingsley Ben-Adir, Craig McGinlay, Tom Wu, Neil Maskell, Freddie Fox, Annabelle Wallis, Bleu Landau, Mikael Persbrandt, Poppy Delevigne.
Approx Running Time :   126 Minutes
Synopsis:   Robbed of his birthright, Arthur comes up the hard way in the back alleys of the city. But once he pulls the sword from the stone, he is forced to acknowledge his true legacy – whether he likes it or not.

Ugh. That’s about my only thought coming out of Guy Ritchie’s energetic and fatally awful King Arthur, as tone-deaf and obnoxious a film project put to the screen this year. Ritchie’s hyperbolic direction could be seen as entertaining through sheer silliness, the story twisted by modern style and the action sequences as daft as they are enormous, but King Arthur is destitute of something intangible: heart. The legend of Arthur and his knights has long been mined by Hollywood’s craftsmen, with occasional hits among the array of modern misses, but Ritchie’s campy, deliriously cheesy take on it won’t endear it to serious scholars and hardcore fans, that much is certain. The opening ten minutes (before the title arrives on screen) felt like I’d wandered into another film already in progress, and things don’t get much better from there.

When benevolent English King Uther Pendragon (Eric Bana) is betrayed by his evil brother Vortigen (Jude Law), the kings young son Arthur is sent into the backstreets of Londinium for his own safety. Raised by whores and learning to fight dirty, Arthur (Charlie Hunnam) eventually has a sweet little life as a gangster running the streets; he has no knowledge of his parentage or legacy, until Vortigen, searching for the prophesied “Born King” through the lands by forcing everyone of the right age to attempt to pull magical sword Excalibur from the stone in which it’s embedded, draws him out into the open. Aided by a mage (Astrid Ferges-Frisbey) and Uther’s former army commander Sir Bedivere (Djimon Hounsou), Arthur must make a journey of discovery (ugh) before he can take his rightful place as King. 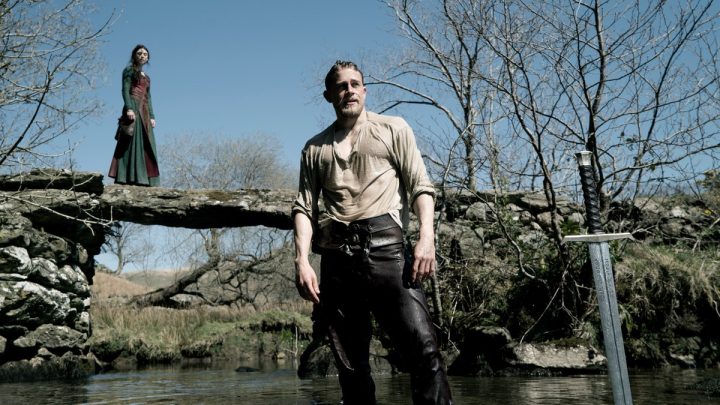 Ritchie filters this tale of good and evil through a lens of Jackson’s Lord Of The Rings smashed into Paul Greengrass’ Bourne films, kinetic exposition and widescreen smothered beneath James Herbert’s jaunty editing, as Hunnam’s square-jawed yet bullish Arthur initially defies, and then comes to understand, his destiny. Hunnam is easily outshone by both Jude Law, playing the dastardly Vortigen, and Djimon Hounsou, as Bedivere, but personifies an Americanised Arthur with slicked-back hair and a swagger undiminished by his incongruity amidst the all-English setting. Using the same dexterous narrative style he employed in both Sherlock Holmes entries and the far superior Snatch, Ritchie’s command of the camera is evocative and one of the film’s few highlights, but King Arthur is saddled with too-clever-by-half plot devices and an ignominious treatment of the source material. 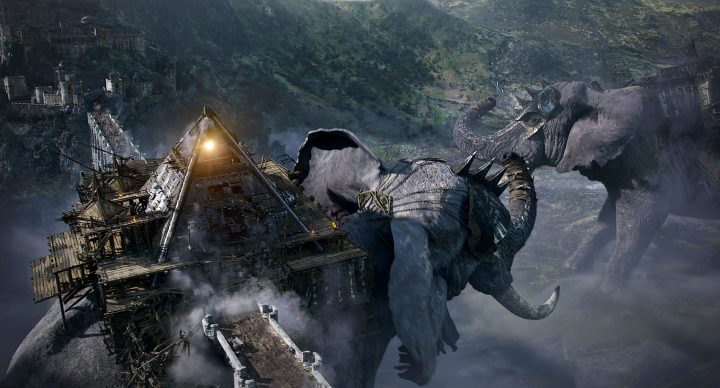 Conceived as the first in a planned six-part film franchise, Legend Of The Sword is diverting provided you think nought about all its inconsistencies and a ravaging of coherence, replaced by over-the-top style and furious sound editing. Scripted by Ritchie, Joby Harold and Lionel Wigram, the story’s medieval mysticism and action-film aesthetic offer brief subtextual underpinnings on loyalty and destiny, of hope and the burden of leadership, although the constant underground-gangster dialogue feels like Ritchie’s ripped the characters from Lock Stock & Two Smoking Barrels and shoved them into this film haphazardly. There’s a cheery insouciance to Ritchie’s film, as much a story of underdogs as it is about the future King, and although hammered into oblivion by overcooked surround sound and Daniel Pemberton’s engaging score, one can peer beneath the banality of plot twists (look, it’s your traditional man-who-doesn’t-want-to-be-king-but-can’t-avoid-it trope, with all that comes along with it) and find a cleverly filmed yet disengaging fairy-tale that’ll provide minimal interest upon future rewatches.

While Hunnam delivers the requisite leadership on screen, he’s ably backed up by Astrid Ferges-Frisbey as the film’s Gandalf, able to cast spells and control animals through telepathy – you know, the usual fantasy stuff – and a gaggle of supporting actors including Kingsley Ben-Adir, Craig McGinley and Game Of Thrones‘ Aiden Gillen as Goosefat Bill, a local insurgent. They all look like they’re having a terrific time in this thing, and this does a lot to alleviate the overall dissatisfaction I had with it. Jude Law’s Vortigen is as campy and hysterically sneering villain as you’d hope to find, a perfect foil for Arthur in that he’s the very antithesis of all that’s good in this world; Law plays it up superbly, if predictably, and it’s great to see him do something so goofy as straight-faced as he does.

Among the problems with Ritchie’s take is the overabundance – and over-reliance – on artifice and CG, and as amped up as the film is on its own masculine testosterone, the adrenalised temperament of the film’s final act, particularly the (pretty cool) slo-mo moments displaying Arthur’s power when he wields Excalibur, are confusing and hyper-extended. If anything, it reminded me a lot of the overblown finale to both Man of Steel and Batman V Superman, a lot of CG carnage that carries little actual weight. Basically, Arthur becomes a superhero, and Ritchie does his best to solidify this fact through earth-shaking destruction and mythic scale (enormous Tolkein-esque war elephants appear in the film’s extensive prologue to set the scene on just how nuts this movie can get) to the point it borders on migraine-inducing.

King Arthur: Legend Of The Sword is all about Arthur and that gosh-darn sword and I guess if that’s what you pay to see you’ll be rewarded. If you’re after simplistic escapism and a sense of camaraderie and friendship the film will suffice long enough to bring a smile to your face periodically, but the overall result of Ritchie’s shenanigans is a messy, bloated, stuffed-to-the-gills adventure film that lurches to its conclusion without subtlety or deeper wit. The idea is sound but the execution, with such a spectacular waste of digital prowess to boot, is a gargled goulash of disappointment.

2 thoughts on “Movie Review – King Arthur: Legend Of The Sword”