Okja is a film about exploitation. Devastating, at times heartbreaking, the film’s central theme of people using things around them – animals, other people – for personal gain is incredibly sad and yet entirely prescient. It’s also incredibly weird, which isn’t to say unlikeably weird, just uncomfortably weird if you’re not use to this kind of film. It’s a bizarre melding of fantasy and adventure and some very dark, very adult themes of value and perception. Despite featuring a cutesy all-CG title character in the form of a giant genetically modified pig, as well as child actress Ahn Seo-hyun, this is most definitely a film unsuitable for children. 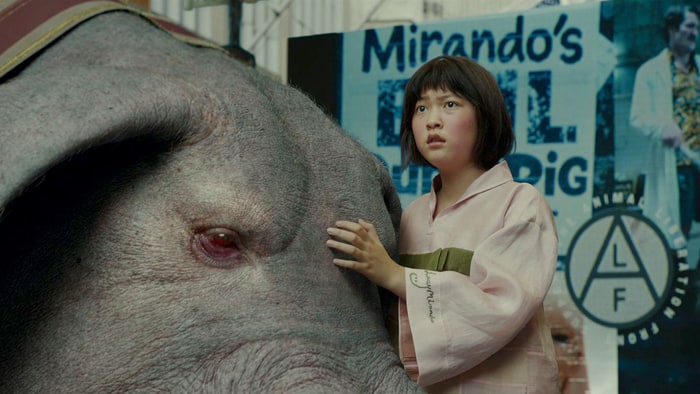 CEO of Mirando Corp, Lucy Mirando (Tilda Swinton) announces her corporation will breed a selection of superpigs, all of which will be sent to different parts of the world to grow. Ten years later, young Korean girl Mija (Ahn Seo-hyun) is living a rural life with her grandfather (Byun Hee-bong) when the corporation’s television personality spokesman Dr Johnny Wilcox (Jake Gyllenhaal) arrives to declare her pig, Okja, the winner. Effectively pignapped, Okja’s sudden trip to the corporation’s New York City laboratories for testing is interrupted by a covert operation by the Animal Liberation Front, led by Jay (Paul Dano), whose credo is to allow no harm to come to animals. The ALF Plans to uncover Mirando Corp’s dirty secrets and subversively uses Okja and Mija to accomplish their task.

As the child of a farming family, I’m not entirely averse to animal slaughter to provide us with food. I’ve partaken in slaughtering animals myself to feedHowever, for an increasing number or us, the idea of millions of animals slaughtered daily for our consumption is a horrifying statistic, and Okja predisposes itself on the idea that all these animals might very well be somewhat sentient beings capable of emotional thought like us; blatant liberalisation of animal rights notwithstanding, Okja’s powerful message of friendship and uniqueness is lost among the bleak, bloody stylistic choices of Bong Joon-ho’s work. 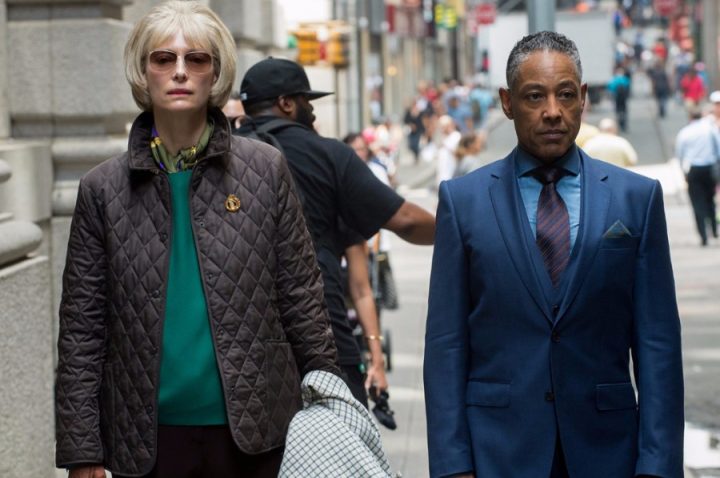 Essentially, Okja feels more like a commercial against mass slaughter of animals than anything else, and if that’s its message then consider it delivered. With Tilda Swinton’s irascibly kooky performance anchoring the villainous side of the story, and the delightful Ahn Seo-hyun as Okja’s keeper and friend Mija, the stark contrast between corporate requirement and individualism acts as the film’s contemporary narrative. It works, sure, but it’s hardly subtle. If you’re an animal liberationalist then this is right in your wheelhouse, and if you’re a human being with a pet then you’ll attach to this quest story against the odds, but Okja is about the most obviously sermonising film I’ve seen in modern cinema in quite some time. And I don’t like to be lectured at.

Overcoming my own prejudices towards the underpinning story within Okja, the film itself is daring and haunting, depressing and beautiful in all kinds of ways. The title creature, Okja, is a fanciful “pig” creature that feels like a cross between an actual pig and a bulldog, exhibiting puppy-like features with the innocent personality of a toddler. Resolved entirely through CG, Okja is a winning character in her own film, cute and lovable and entirely empathetic: exactly the kind of character we’re attached to because of her inherent innocence. Okja’s plight, that of a meat farm’s byproduct, is horrific if only because we subject many other kinds of animals to that plight every time we order a Big Mac, and Mirando Corp’s shareholder mandate isn’t exactly magnanimous. It’s business, as one character exclaims late in the film, as if justifying human survival against a backdrop of perceived cruelty will resonate with audiences. It probably does. It’s an empty thought bubble, though. A hollow jab at our insatiable desire for meat and sustenance that feels like somebody pointing to a turd on the floor and saying “if only we could stop people shitting on the floor.”

The cast are uniformly good, from Swinton at her unique best, to Jake Gyllenhaal’s off-his-rocker portrayal of the world’s worst television naturalist, to Paul Dano’s surprisingly straight-up ALF leader, right across the board nobody puts a foot wrong. Ahn Seo-hyun’s Mija is affecting for her ability to emote with the barest look, and conveys all manner of things using minimal dialogue. The use of the film’s visual effects are inserted brilliantly into the live-action footage, present without being overt or showy – a real feature of this beautifully lensed film – and the rendering on Okja herself is superb, with only a few moments of “actors touching a digital creature that’s not really there” fake-ness. Regardless of what you think of the film’s central premise, its execution (pardon the pun) is sublime. If you’ve seen Snowpiercer, you’ll have an inkling of how terrific a Bong Joon-ha film can look.

Okja is an adult fairy-story that suckles the teat of animal rights more than I’m comfortable with. It’s a personal thing, I believe, and it coloured the film in a way I didn’t enjoy, and I doubt I’ll be able to re-watch it without grinding down several teeth. That said, there’s a startling beauty within Okja’s bleak outlook, enhanced by wonderful creature design and several enjoyable performances. If you’re an animal lover there’s every chance you’ll ugly-cry your way to the ending of this film, and even if you’re not there’s some real thinking material to be gleaned here. It’s a film with a purpose, moreso than the trailer indicated anyway, and for what it’s worth Bong Joon-ha delivers on that purpose and then some. But it feels a little too much like a lecture, a brimstone sermon with artifice and whimsy inserted to keep at bay the eye-rolling. Spare me. I can see why many (most?) critics found Okja to be brilliant or revelatory. I just couldn’t work past the overt sentimentality of it all.