You know that old movie trope where a breathless woman heaves herself into a man’s arms, clutching him as they kiss passionately (or, rather, vigorously), a soft jazz note playing beneath them? Yeah, that old chestnut. Jailhouse Rock is that kind of film, a breathless, heaving example of Presley’s raw charisma and sneering personality that engendered him to teenage audiences of the time. Jailhouse Rock was Presley’s third feature following Love Me Tender and Loving You, and it’s a prime example of the sense of machismo the young star exuded on the screen. The film’s central character, Vince Everett, is a one-time inmate for the state, before a chance encounter with a record distributor gives him the opportunity to become a singing sensation. It’s a rags-to-riches narrative that works into Presley’s limited acting ability and the inclusion of several songs, the title tune being among the most memorable (and most lucrative). But is it a good film?

After accidentally killing a drunk in a barroom brawl, Vince Everett is sentenced to time in prison, where he meets former singing star Hunk Haughton (Mickey Shaughnessy), who sees in Vince the makings of a star. Following a national broadcast, Everett becomes popular, with Hunk keeping it a secret, tricking him into a contract as partners upon his release. When he eventually is released, Everett meets record industry promoter Peggy Van Alden (Judy Tyler), who helps the singer break into the big time with his first record. However, as he becomes more successful, Everett’s selfish and arrogant personality cause rifts in those with whom he comes into contact. 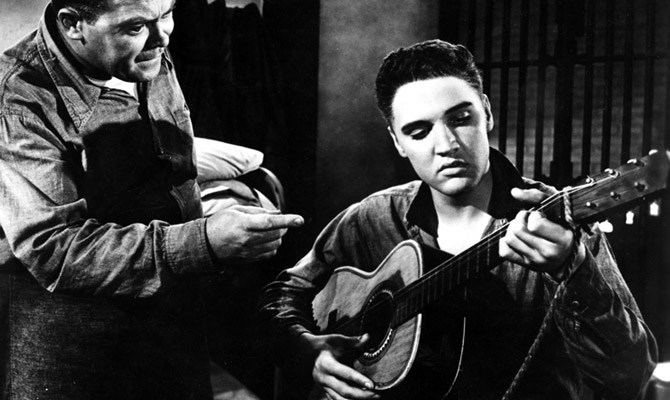 Jailhouse Rock is a mixture of abhorrent misogyny and one of the sexiest lines I’ve ever heard. On the down side, the film’s attitude towards women is appalling (or at least, Presley’s disdain for them is) with the character regarding his conquests like a vulture eyeing off a carcass. At one point, Presley virtually undresses co-star Jennifer Holden, who plays a film studio star, with his eyes as he stands next to her, in one of the film’s most uncomfortable sequences. It’s obvious and startlingly hideous to watch, coloured as it might be with the passing of time and the rise of sexual equality. The rancour afforded to Judy Tyler’s otherwise diffident Peggy is equally baffling, perhaps a product of its time with that rebellious, arrogant behaviour possibly being alluring to girls watching him. Presley snarls through a performance that’s driven by greed and selfishness – not the most gratifying of characters, for sure – and aside from a few moments of pure Presleyness in the musical numbers, here he’s thoroughly unlikeable. 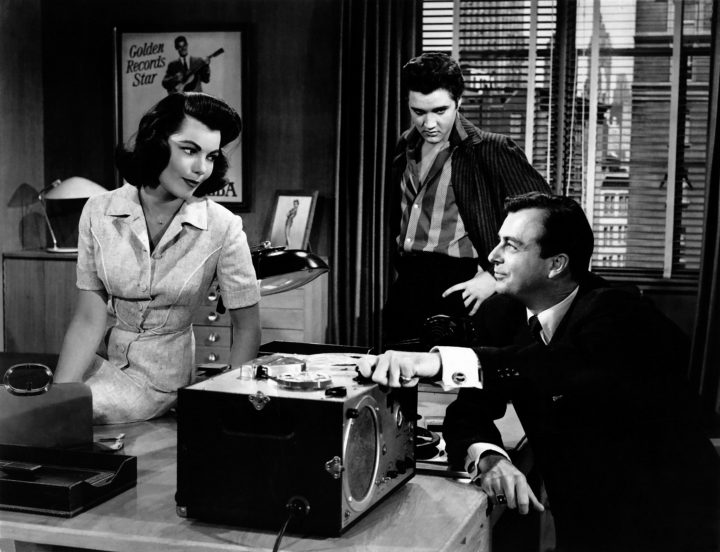 On the plus side, the film contains a deluxe sex line to define sexy lines – as Everett kisses Holden’s character during the filming of a movie-in-the-movie, her “headache” disappears and she breathlessly utters this fabulous piece of writing: “I’ve come all unglued”. Said with that heady mixture of breathlessness and faux-passion, the line is an absolute zinger, transforming the scene into one of pulsating sexual animal fervour. Unfortunately, the rest of the film’s scripting is pretty average, mixing 50’s parlance and old-school theatricality and simplistic, stock characters with expositional dialogue that does little to provoke emotional response. I guess there’s a charm to it all, an elegance of simplicity, but it’s fair to say the dramatic parts of Jailhouse Rock aren’t the strongest. 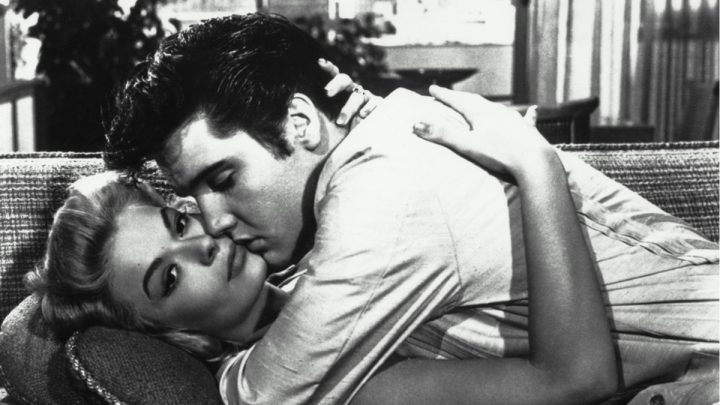 The film’s key asset is Richard Thorpe’s precise direction, and his use of the then new widescreen process involving 35mm film. Jailhouse Rock was the first film shot using new Panavision anamorphic lenses and the widescreen ration is used superbly by the cinema veteran, as is the crisp black and white photography of DP Robert Bronner. Thorpe uses wide shots and close ups with ease, giving Presley his best possible angles and Tyler a somewhat harsh, schoolmarm look. He does, however, make Jennifer Holden look positively radiant, though, so props for that. The production design on the film is solid without offering anything to boast about (although the title track’s dance number, in a jailhouse set, are iconic for a reason: watch it below this review) and the musical numbers, obviously pre-recorded and mimed to on-set, are stately, staid affairs in general. 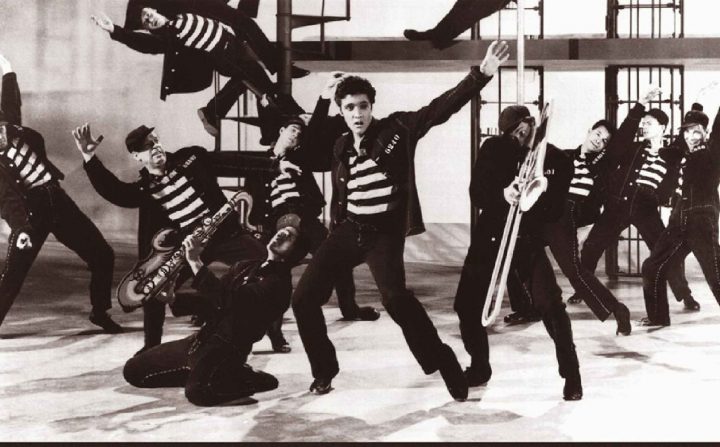 In researching this film I was shocked to discover that Judy Tyler was tragically killed in a car accident only a few days after production on the film wrapped, aged just 24 at the time. It’s a sour postscript to an otherwise amenable Presley film, a film best known for its title tune and little else. The characters are melodramatic, the acting across the board good-but-not-great, and the musical elements sold purely on the screen charisma of Presley himself, there’s just not enough substance in Jailhouse Rock to make the odious character Elvis plays worth the watch.