The fourth film in the Despicable Me franchise (including the Minions movie), the third Gru-centric adventure is an enjoyable romp albeit a muddied, ill-focused comedic enterprise desperate for heart and soul. Jumping the shark to introduce Gru’s long-lost twin brother Dru (both voiced by Carell), Despicable moves away from the original film’s bad-guy-made-good theme and ventures into less nuanced waters; here, character interplay is less dependent on motivation and more intrinsic to the overarching plot, with sidebars that go nowhere and a smattering of jokes that clatter to the floor with awkward post-modern cynicism. The film is aimed squarely at fans of the franchise: if you’re one of those souls (such as myself) who has come to despise those Tic Tac-shaped Minions and all they stand for, Despicable Me 3 won’t change your mind one iota. If you’re a fan of Carell’s bizarrely Russian-esque Gru character and his dichotomous relationship with moral forthrightness, you’ll likely walk away disappointed. If you’re easily pleased by bright colours and dazzling animation then settle in for a real treat. 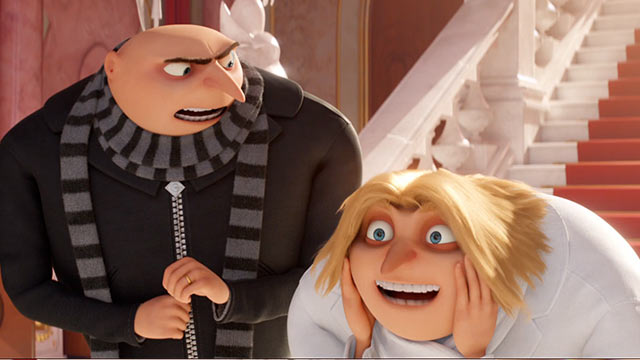 Former global villain Gru (Carell) and his wife, fellow Anti Villain League Agent Lucy (Kristen Wiig) are suddenly fired from the agency by incoming boss Valerie DaVinci (Jenny Slate) for failing to capture 80’s-themed supervillain Balthazar Bratt (South Park’s Trey Parker), who is attempting to steal the worlds most valuable diamond. Now with nothing to do, Gru feels sad about not having a focus in life – until he chances upon the knowledge that he has a long-lost twin brother, Dru. Dru, living at the palatial estate of Gru’s recently late father, is a foppish, derided individual who sees in Gru a chance for personal redemption: together, they decide to perform one last heist to retrieve the diamond and stop Bratt from lifting Hollywood into space with his giant action-figure robot.

The wear and tear is evident now: Gru and his Minions have well and truly worn out their novelty, with this film’s narrative stretched to conniptions of contrivance and a sweet 80’s soundtrack (as close as children’s animated fare gets to approximating the cool of Guardians of The Galaxy, I think), often aimed more for the adults watching than the younger tots. Despicable Me 3 suffers the same indifferent issues as other long-running animated films (Shrek and Ice Age, I’m looking at you in particular) in that they have exhausted their potential for character-driven development and instead supplant it with contorted retroactive backstory and weird unicorn-centric subplots that don’t work at all.

The film’s focus on Gru and his brother Dru feels rushed, almost contrived, the polar opposite characters even dressing in exactly opposing colour schemes in order to make things easy for the kids. The Balthazar Bratt arc draws the most laughs, as Parker’s mullet-sporting throwback to the decade of shoulder pads and big hair (and bigger music) invites older audience members some fond chuckles at nostalgic expense, even if the target audience will likely miss everything amusing about it. The Bratt character is introduced as yet another foil to Gru’s “villainy”, despite the latter having almost no motivation to actually be a villain, and their byplay and contrasting egos is occasionally hilarious, if underdeveloped. Carell’s Gru is once again the hapless victim of diffident family upbringing, his mother (a gravel-voiced Julie Andrews) neglecting to advise him of his sibling’s existence. It’s less about Gru’s discovery and more about Dru’s inability to move past his father’s constant belittling, with a scene midway through the film eliciting a tidbit of empathy for both parties at the years lost to resentment. The foundation of the film never gels completely – what is the underpinning motivation for the story other than clever historical pop-culture references (and they are usually clever), for Gru, Kristen Wiig’s decidedly ineffective Lucy (herself trying to be a good mother to Gru’s adopted daughters, once again providing the contradictory adult thinking behind the animated shenanigans) and Dru, if not for simplistic broad-stroke familial bonding.

The film cantilevers between outright adventure comedy and farcical caper film, chock full of energetic action sequences and hit-and-run swipes at Disney (an early nod to Finding Nemo made me chuckle uproariously), while the characters seem left behind in the wake of brevity over depth. There’s style to burn and plentiful sidebar elements to keep you entertained – an arranged marriage subplot between Gru’s eldest daughter Margo (Miranda Cosgrove) and a chunky local lad, Nico (Adrian Ciscato) is unsurprisingly icky-creepy for a kids film, while youngest kid Agnes’ (Nev Scharrel, replacing Elsie Fischer from the previous films) fascination with unicorns leads to some unexpected moments – but it’s at the expense of quality. The jokes fly thick and fast, the films’ emotional weight rests on our understanding of previous instalments, and almost none of the characters are changed or challenged in any way throughout the film. Gru and Lucy, together with Dru, are pretty much the same people at the end of this film as they are at the start. We’re not on a journey with them emotionally, we’re simply there to witness them do funny stuff.

If you’re thinking “but what about the Minions, though?” and that I’ve neglected them, I truly haven’t. The Minions, as they have been throughout, are tedious, unfunny receptacles of the film’s gratuitous marketing ploy to sell happy meals. Voiced by co-director Coffin (as he has since the first film), these gibberish-speaking clowns aren’t the slightest bit entertaining as they stumble and bumble their way through musical numbers (a prison song-n-dance sequence is diverting but feels out of place amongst the insanity, if you can believe it) and ribald slapstick but you can see almost all the material being funny in the writers room and somehow being un-funny on the big screen. I’m over the Minions.

My kids, however, loved this film. Bopping and swaying to the thumping soundtrack and musical choices (Madonna and Michael Jackson get a fair run), this is a kids film that works more for them than the parents forced to watch too. I admit, I did laugh a lot throughout, and several of the jokes really landed hard with me, but I could feel myself disengaging with the film at any kind of serious level and that was something I never encountered with either the first or second ones. Despicable Me 3 is good old “family fun” without doubt, but any serious critic will look at this and understand that the premise, which originated alongside fellow Bad Guys Are Good Too subgenre entries like Wreck It Ralph and Megamind, has run its course and probably should stop now. It just feels tired, straining to maintain momentum, and that means it’s time to park this thing up and leave it alone.

4 thoughts on “Movie Review – Despicable Me 3”