Modern psychological horror films like The Belko Experiment work best when they’re smart, well directed and dependably brutal. Films like Cube, The Human Race, and to a degree the Purge films pit people against people for some sick purpose (often for nothing more than cheap thrills), and this one isn’t any different. Separating this film from others like it is the name James Gunn, director of Marvel’s hugely successful Guardians of The Galaxy films who pulls writing duties here, so the film probably has more pull than it might otherwise, but Belko’s kill-or-be-killed narrative, with its echoes of Hunger Games and Battle Royale, together with a gory, brutally bloody visual aesthetic from Wolf Creek’s Greg McLean, offers visceral genre thrills and sweaty, conundrum-infused moral turpitude.

An office block in Bogota, Columbia, owned by the Belko corporation, becomes the scene of a horrifying social experiment: when the building is barricaded shut, trapping 80 American workers, they are forced to obey the orders of an incorporeal voice from loudspeakers demanding they all kill each other. Belko COO Barry Norris (Tony Goldwyn) takes command, threatening to execute people together with co-worker Wednell Dukes (John C McGinley), while cube-farm employee Mike Milch (John Gallagher Jr) tries to remain on the moral high ground as his office lover Leandra (Adria Arjona) also tries desperately to escape almost certain death. As the body count mounts, and simple survival becomes the overriding course of action, even the best kind of people turn into savages. 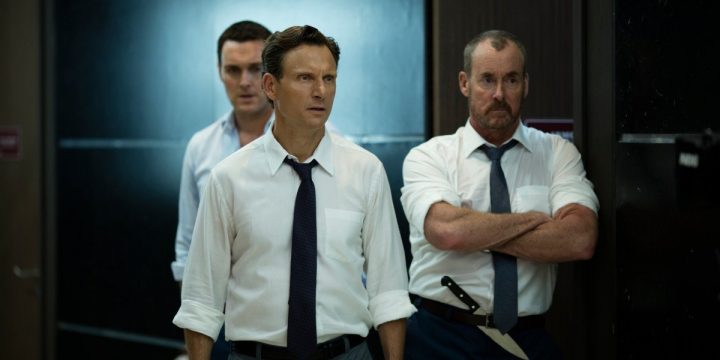 If all you want to see is people killing each other in inventive and brutal ways, The Belko Experiment will offer resolutely shocking viewing. If you’re after a thinking person’s horror film, you’re best swerving elsewhere. Belko follows the tried-and-true “trapped people order to kill each other to a countdown” format, imprisoning our cast inside a Raid-esque tower office block and given minutes to engage in wholesale slaughter in order to survive. It’s not so much a question of survival but rather whether or not anybody will make it to the closing credits; will it be the “hero”, Gallagher Jr’s Milch, or Tony Goldwyn’s frowny-faced company executive, or Melonie Diaz’ street-smart Dany, or will it be the generic stoner dude (why is he even in the building?) played by James Gunn’s younger brother Sean? Yeah, it’s a puzzle, aided by slick direction from Greg McLean, but it’s one that’s largely unrewarded as the film’s gore and bloodthirsty bulkhead overwhelm any of writer James Gunn’s potential for subtext. 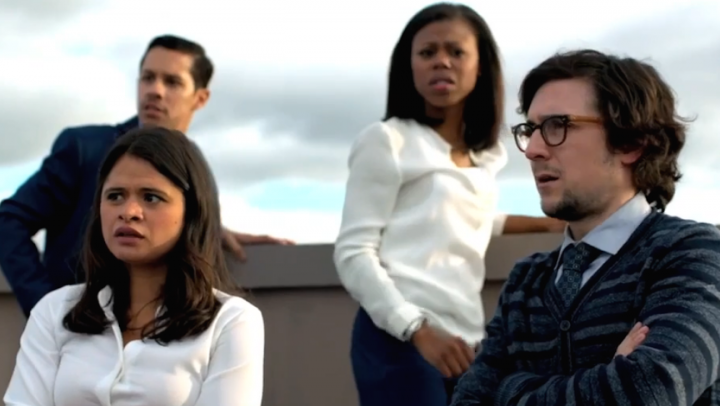 The film takes its base premise and amps up the violence; people shoot, stab, machete and crush each other with gleeful abandon, whilst in one sequence the Voice (voice of Gunn regular Gregg Henry) slays 30 innocents to make some kind of point with explosive implants (because each employee allows themselves to be implanted with “tracers” to ward off potential kidnapping…. lolz). There is brief discussion about the value of human life, about the breakdown of civil order (the Purge films offer more compelling examination of this idea), but as chaos descends any cerebral musterings Gunn and McLean might have had become lost amidst the gushing fountains of blood. And indeed; Belko is absolutely bloody. The practical work on the corpses used throughout the film is exquisite, as heads blow apart and a river – nay, torrent – of blood washes through the corridors of Belko’s generic office block setting. That such horror could emerge from such a bland, immediately identifiable locale is part of Belko’s charm, although this ain’t no Office Space comedy. 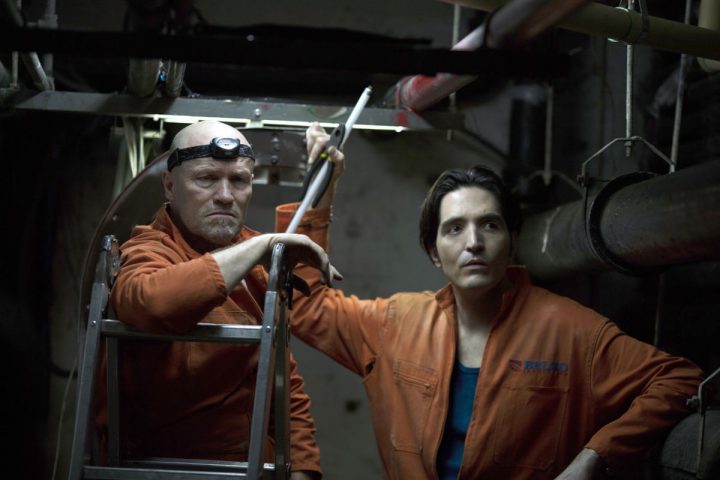 McClean spends the early part of the film expertly building up the ensemble of disparate characters we’re about to follow, mostly your rag-tag bunch of corporate drones and assorted office-ephemera. John C McGinley’s creepy Wendell Dukes is an obvious lock for teeth-clenching villain, while Tony Goldwyn’s transition from stand-up head honcho to squint-eyed survivalist is naturally chilling. Melonie Diaz’ Dany offers a mirror female role to Adria Arjona’s central Leandra character, while two Twister alumni show up together – Rusty Schwimmer, who plays a secretary here, and Abraham Benrubi, as a cafeteria worker, co-starred alongside Helen Hunt and Bill Paxton in the storm chasing classic; Schwimmer played Hunt’s mother in a pre-credit sequence, while Benrubi played a member of Carey Elwes’ competitive chaser team – and of course John Gallagher Jr, last seen being shot by John Goodman in 10 Cloverfield Lane, brings Everyman charm to the role of Milch, this film’s central character. Milch is the film’s moral center, standing firm against the “kill or be killed” motivations espoused by the Voice, until he’s left with no choice but to start to survive. Gallagher Jr grits his teeth and delivers an empathetic character that feels out of place against the forces railing against him.

The thing about films like this is that the payoff needs to stick the landing, either as a last-gasp twist or some other chilling denouement that satisfies the carnage that’s come before. Cube left us wondering how “big” the experiment went, whilst The Human Race offered a distinctly alien stinger that failed to work as well as it should have. Heck, even The Signal tried its hand at rug-tugging endings (and failed to achieve anything great), but The Belko Experiment doesn’t even try to hide that it’s heading towards some reveal at the end. But is the payoff worth it? Well, yes and no. Yes, because at least we get a resolution (see Extraterrestrial for how to undercut audience expectation in the worst possible way), but no in that it’s not satisfying. It’s actually less than satisfying, if I’m honest, and feels like a cop-out. Go into this film with that in mind, keep your expectations lowered, and you’ll walk out having at least been shocked and awed by the depravity on display (I think James Wan and Eli Roth would want to take notes here). The Belko Experiment obviously teases possible sequels (groan) and I can see some lower quality offering coming along in a year or so as a follow up. 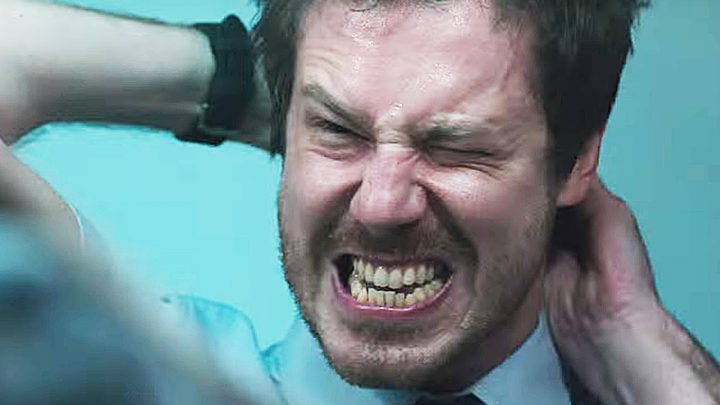 Despite a bombardment of violence and graphic human depravity, The Belko Experiment misses the mark with either subversive humour (there’s no wry irony or cheap gags anywhere here) or outright gore-porn splatter-fun, an opportunity lost to make this film zing when it simply flounders. The character feel genuinely realistic, the setting maximised the urbane blandness with which to set forth death and destruction, and Greg McLean’s sterling direction feels potent in fits and spurts (at least this is a whole bucket-load better than his last effort, the awful The Darkness), but Belko doesn’t hit the home run Gunn’s writing elicits with its cheap-and-nasty pulp flavouring.It’s good, it’s definitely horrifying, but you get the sense there could have been more to it than this.