Betrayal, murder, revenge. All good plot points for a classic film noir directed by Hollywood icon Joseph L Mankiewicz, based on Jeremy Wiedman’s “I’ll Never Go There Any More”; House Of Strangers is a sizzling tale of hatred, of bruised ego and battered identity, driven by a sterling Edward G Robinson. Sparkling dialogue – the screenplay is credited to Philip Yordan, who would also write the western remake of this story in 1954’s Broken Lance (and win an Oscar for it) – and solid production value in and around New York City, give this smoky, angry film a frisson that delivers.

Robinson plays Monetti patriarch Gino, a wealthy immigrant with four sons who owns a bank on New York’s East Side. His favourite son, Max (Richard Conte) works in the bank as a lawyer, whilst the other three sons, eldest Joe (Luther Adler), Pietro (Paul Valentine) and Tony (Efrem Zimbalist Jr) fruitlessly try to win their father’s favour. Max is engaged to Maria (Debra Paget) but is in love with the ice-cool Irene Bennett (Susan Hayward), although their dalliance is interrupted by the government’s indictment on Gino for fraud and other banking irregularities. Forced to defend his father, Max spends 7 years in prison for attempting to coerce a juror, and seeks revenge upon his release. 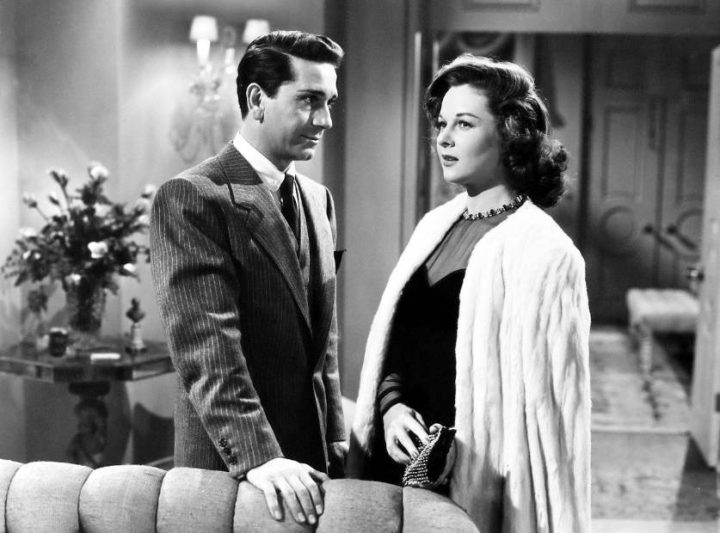 House Of Strangers is a sublime film. It’s an angry, ripe explosion of human disgust and seething vitriol, of a hot-blooded Italian family torn asunder by vanity and hubris. We open in “modern” day, Max is out of prison and he returns to New York to confront his brothers, all of whom harbour fear and resentment towards him, although for why we’re not privy. Max meets up with a former flame in Irene, who argue about Max’s intentions now that he’s out of jail, and from there we fly into a lengthy flashback to the early 30’s, when Max and his brothers worked in their father’s bank. Gino Monetti is portrayed initially as a garrulous, pious money lender of repute in the neighbourhood, helping those who come seeking financial aid like a Mafia Don. Max’s law office provides for shadier dealings with criminals, and hard-done-by brother Joe feels overlooked by his father despite the bank being promised to him in time. Joe’s wife Elaine (Diane Douglas) harbours resentment towards Gino for not giving her husband a liveable wage, whilst Pietro’s career as a pugilist isn’t hitting the heights Gino expects either. The Minotti family have a whole lot of hate towards their father, it must be said. 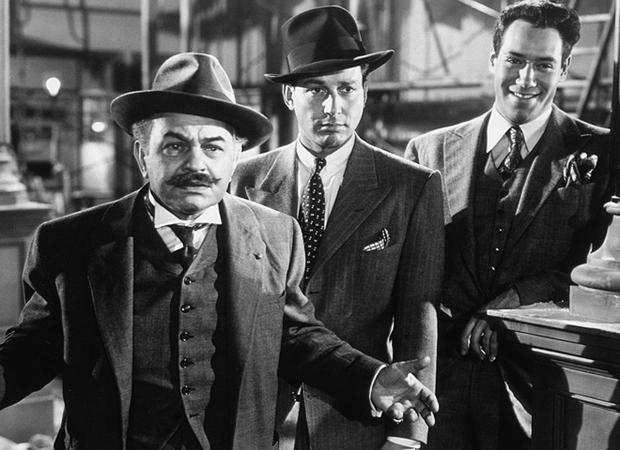 Robinson dominates the film, as you’d expect. Gino Monetti is a complex character, but on the surface is an up-front family man. Also, he doesn’t play by the banking rules, which leads to his eventual downfall (and the reason Max spends time in prison), and the film spends substantial time making us think he’s more protagonist that antagonist. He isn’t: like a boulder descending a mountain in an avalanche, Gino Monetti creates problems for those in his path. His wife (Esther Minciotti) laments their family’s fortunes since they moved from the “old country” to America, tellingly reprimanding Gino that they had “everything” back then, before they came to New York to have “nothing”, a statement about the value of family versus the value of wealth. It’s a damning line, perhaps the most astute observation in a film full of them. Gino’s disdain for the rules, a banking act enacted by the city, leads to his crucifixion in the public eye, a fate worse than death for Gino. 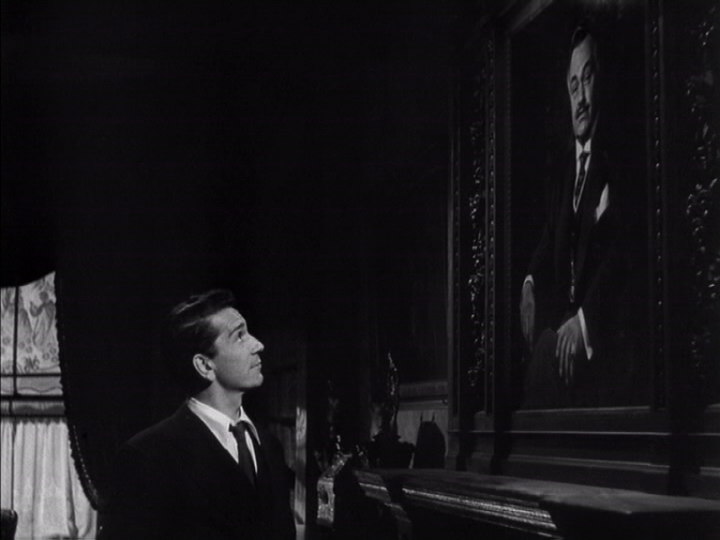 Richard Conte’s Max is the film’s one positive character, flawed through infidelity and bribery, and Conte is superb in the part. He’s a headstrong, no-nonsense type who cannot take no for an answer, even when Irene blasts him to get out of her life. Masculine virility plays an important part in noir films, so much so that today it might border on misogyny, and let’s face it, House Of Strangers is a product of a time when this kind of thing wasn’t frowned upon. It’s a wry film, in this respect, when the bullies and charlatans become victims of their own hatred, although Luther Adler’s Joe has some claim to maltreatment. The film’s crushing climax, which sees Max nearly thrown from an upper apartment window to the street below, is genuinely thrilling, because it would be apropos of the film for that to actually happen to the character. House Of Strangers isn’t a film about winners or losers, it’s a film about survival.

Leading the female roles is archetypal screen qween Susan Hayward, as Irene. While not a particularly complex character, she berates, riles and aggravates Max throughout with her ice-cold beauty and come-hither sexuality. Hayward is stellar in the part, offering a luxurious sensuality to a character almost devoid of it for much of the film. Their passion – lingering kisses at a boxing match, and an entirely unsubtle disrobing in her apartment – ignites their scenes together, even when they’re barely doing anything. A scene inside a backstreet speak-easy jazz club where they are virtually ignoring each other just zings with unspoken anger, and it’s a testament to both Yordan’s writing and Mankiewicz’ direction that the scene works so beautifully. Hayward makes her relatively shorter screen time feel all too brief, a captivating and sympathetic performance with a role that’s not the most sympathetic one you’ll see. 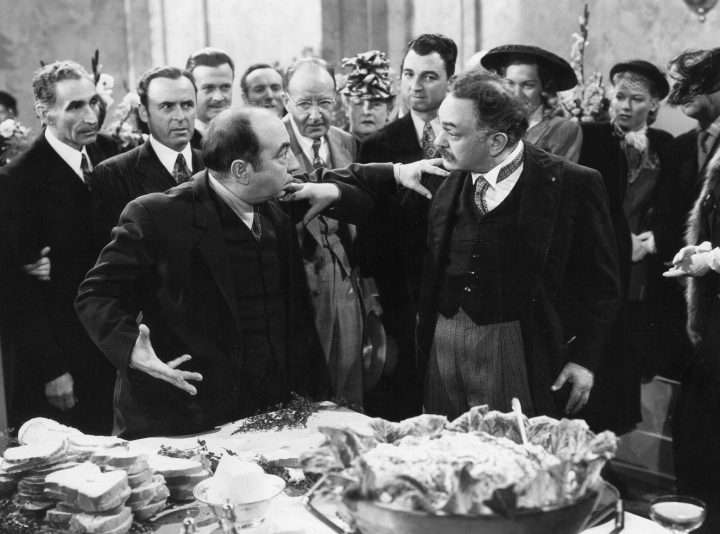 Obviously, key to all this angst is Joe Mankiewicz’ direction, and it has to be said that the film’s production value and style are first rate. Lensed by veteran DP Milton Krasner (All About Eve, An Affair To Remember, King Of Kings), House of Strangers looks fabulous, from the wealthy Monetti apartments, to Irene’s lavish suite, to the bank, to the underground club Max frequents periodically. The crisp photography is stark, allowing relatively little darkness to fall on characters, whereas the walls of the Monetti house, as well as in the prison scenes, are smothered in darkness and oblique shadowy shapes. The exterior scenes appear to have been shot largely hand-held at times, which gives the movie an eloquent unevenness to mirror the emotional states of our characters. I did chuckle at the suit-and-hat brigade of men’s costumes, with their wide shoulders and crisp vaguely Edwardian lines; Irene fares best with some stunning outfits highlighting her face, including plunging sequinned number later in the film that indicates her diamond-among-the-coal approach to the story. The Monetti’s are working-class made good, whilst Irene could be categorised as “old money”, and the clash between their styles is palpable.

House Of Strangers is an exquisite depiction of American despair and hubris, framed through the age-old family affair motif where the older and younger generations are undergoing a schism in relationship. The film’s feeling of danger and impending darkness is scintillating, the dialogue exquisite, and the performances (especially from Robinson and Conte) are of an especially high standard. House Of Strangers has many hidden layers of complexity that I’m looking forward to examining on future rewatches, and it comes very highly recommended indeed.