In the landscape of Hollywood animation studios, there’s really only two instantly recognisable behemoths that garner the most commercial bulk: Disney’s Pixar Studios, and Dreamworks Animation. The former, which burst onto the scene in the mid-90’s with Toy Story, quickly established itself as a high quality workhorse capable of delivering crowd-pleasing, critic-pleasing, money-printing machine. Then formative studio DreamWorks SKG, run primarily by Jeffery Katzenberg, was rushing to capitalise on the success of the new technology and searching for something different. Whilst Pixar’s A Bug’s Life and PDI’s ANTZ (released by DreamWorks) had collided with similar premises, the development of Shrek and its monumental skewing of pop-culture to gleeful audiences offered viewers something different to its competitor; something, I might add, that younger audiences might not fully appreciate. 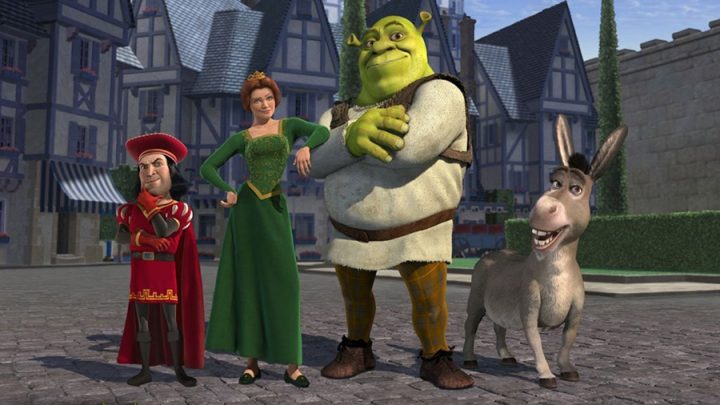 In a far off land of fairy tales, grumpy ogre Shrek (voice of Mike Myers) lives in solitude in his swamp. His solace is interrupted by the intrusion of exiled fairy-tale creatures at the order of evil Lord Farquaad (John Lithgow), who detests their very existance. Suddenly inundated, Shrek decides to travel to Farquaad’s castle, in the town of Duloc, and ask that he give him back his swamp. Along the way, Shrek befriends a talking Donkey (Eddie Murphy), whose constant verbal barrage grates on Shrek’s nerves. Sensing a way to legitimise his grab for power, Farquaad offers Shrek his home back if he completes a quest: to rescue Princess Fiona (Cameron Diaz) from a tower guarded by a fearsome dragon, who the tiny-statured ruled intends to wed. However, Fiona has a secret that will change Shrek’s life forever, if only she’d reveal it.

Part of the fun of having young kids is getting to revisit classic animated films with them and remembering how I felt watching it the first time. Perennial favourites such as The Lion King, Bambi and Sleeping Beauty have had countless rewatches at our house, and are obviously still as awesome now as they were on the first day of release. DreamWorks’ Shrek franchise, which has run its course and is now consigned to spin-offs and possible reboots (gah!), began with a bang, a direct contrast to Pixar’s family friendly offerings in that it offered clever pop-culture references and saccharine moralising with a twinge of clever writing that brought with is significant box-office receipts. Back in 2001, Shrek landed an impressive half-billion dollar box-office take (although not quite as impressive as today’s $1b+ revenues) with its instantly memorable buddy-comedy motif in which Mike Myers’ Scottish-brogued title character and Eddie Murphy’s hilariously verbose Donkey had audiences everywhere in stitches. Unsurprisingly, Shrek would go on to spawn three direct sequels (Shrek 2, Shrek The Third, and Shrek Forever After), as well as spin-offs including Puss In Boots and a slew of made-for-TV specials. 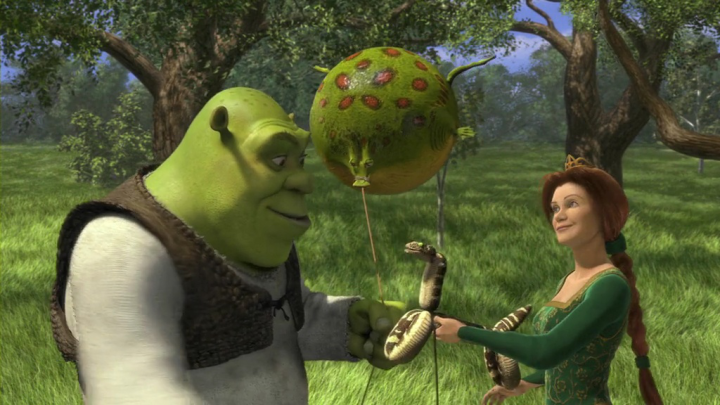 In recent years, rewatching Shrek has led me to what may very well be an entirely unpopular opinion: the franchise, particularly its earlier iterations, hasn’t aged very well. Not in terms of its animation, which is still really decent, but rather its self-aware humour and continual references to other films and concepts, to say nothing of its trendy musical soundtrack that featured (gulp) Smash Mouth not once but twice.The film rips into established Disney archetypes, including princesses, princes, and general fantasy tropes (the singing animals bit is hilarious still), although spoofs of films such as The Matrix (bullet time), and the dragon’s opening eye (Godzilla) will be lost on anyone under the age of about twenty. Throwaway lines to the Three Blind Mice, Pinocchio and the eponymous Wolf from Little Red Riding Hood would garner populism in later years, allowing the filmmakers to take one-joke ideas and give entire scenes to them (such as in Shrek 2) but here they’re ancillary to the overall plot.

For the kids, there’s lots of bright shiny bedazzlement and a surfeit of whizz-bang cool to go around, while adults will enjoy the in-jokes and double-entendre-laden humour as it passes. It’s a great time waster that delivers on the very notions it attempts to skewer: being true to yourself and looking deeper than what’s on the outside are exceptionally Disney-esque motifs that are prominent throughout Shrek’s off-the-wall laughs. But it’s a creaky thing, labouring now when it soared before, daffy non-sequiturs and millennial jabs landing clumsily in more modern times. Perhaps it’s Shrek’s best aspect, the ability to poke fun at itself whilst it’s slating other brands, but the genuineness of its laughs and giddy, sugar-high concoction of parodies feels well worn and occasionally out of date.