Bigger, better, louder. The 2001 sequel to Universal’s Mummy reboot, The Mummy Returns, saw director Stephen Sommers ratchet up the action and spectacle of the previous film and replace intricate narrative twists and turns with sledgehammer volume and cacophonous visual dynamism. It’s a rare sequel indeed that sees the entire original cast return (those left alive from last time, that is) and if you thought The Mummy was high-spirited action and adventure, friends you ain’t seen nothing yet. The Mummy Returns suffers an overabundance of action and characters vying for screen time, and even with the film running over 2 hours, it feels like it passes in a moment, replete with thunderous Alan Silvestri score (one of my all-time favourites) and one of the most cringeworthy CG effects ever put into product people pay to see. Is it a great film? No, it’s not cinematically perfect. Did I love it? Hell yes.

Rick O’Connell (Brendan Fraser) and Evelyn (Rachel Weisz) are now married, and have a young son, Alex (Freddie Boath), whom they take on their continued exploration of ancient Egyptian tombs and sites. Upon discovering the Braclet Of Anubis, Rick and Evelyn realise it is the key to unlocking the secret behind the mysterious Scorpion King (Dwayne Johnson, still credited as The Rock); meanwhile, a secretive organisation seeks to revive Imhotep (Arnold Vosloo) again, in order to bring about a new world order. This group is led by the evil Baltus Hafez (Alun Armstrong) and Meela Nais (Patricia Velasquez), the latter of whom appears to be the reincarnation of Imhotep’s long-lost love Anck-Sa-Namun. As the threat of Imhotep rises again, Rick and his family are aided by Egyptian Madjai Ardeth Bay (Oded Fehr), while Imhotep’s forces include formidable warrior Lock-Nah (Adewale Akinnuoye-Agbaje, which is about the coolest name to pronounce ever!); the pursuit to control the Bracelet culminates in an El Dorado-esque lost jungle with the fate of the world hanging in the balance.

The Mummy Returns is complete and utter nonsense. It’s also a complete blast of unadulterated fun and adventure, taking everything that made the 1999 reboot great and turning it up well past 11. Everything about The Mummy Returns is bigger, louder, faster, more hyperbolic and frantic than that which came before, befitting a true sequel and one of the liveliest adventure films in the post-Y2K era. Landing in cinemas at a similar time to the original Fast & Furious, the first Harry Potter film, and Michael Bay’s wartime  actioner Pearl Harbor, Stephen Sommers’ movie ticks all the boxes for successful enthusiastic reprise and offers the rarest of rare things in modern Hollywood: a sequel that’s actually better than the original. It’s a film with more than a few faults, and the concluding sequence is absolutely bonkers crazy and hideous, but if you’re the kind of person who adores brain-at-the-door filmmaking and utterly preposterous storytelling, then The Mummy Returns is for you.

Tackling a film like this is ripe for criticism in itself: The Mummy Returns is a poster child for critic-proof movies, in that it simply repeats the same elements of the terrific original (with minor twists and changes) and adds in more of everything. Hell, it even includes a reprise of the first film’s “face in the sandstorm” motif, only this time in the water of a tidal wave pursuing our adventurers through a canyon. It isn’t subtle, and it isn’t particularly clever, but Sommers (who is once again the sole screenplay credit here) cannily works in his large supporting cast through a hodgepodge of homage, flashback, clever fantasy and inevitably too-clever chicanery to produce a flavourful film that supersedes its progenitor with antics that would make Sir Isaac Newton goggle in disbelief.

Once again, Brendan Fraser saddles up as the square-jawed Rick O’Connell, an Indiana Jones-lite type adventure character complete with leather vest and penchant for overproduced punching sound effects. Abetted once more by the whipperwhill beauty of Rachel Weisz as his now-wife Evelyn, Fraser and his on-screen family sidestep “family shenanigans” with just enough humour to prevent the film feeling like it’s reaching too far, if only barely avoiding the ignominy of a Phantom Menace-like child actor performance from tiny co-star Freddie Boath, as their kid Alex. Boath (who has appeared in virtually nothing since, it must be said) isn’t totally annoying in his role, but lacks the same screen presence as half the cast of The Goonies or Stand By Me, and achieves nothing by way of comedy relief or dramatic weight throughout. He’s there, and we don’t care.

Returning players Arnold Vosloo has a slightly boosted role here, as does Patricia Velasquez (her iconic sai fight with Weisz that forms part of the film’s flashback sequences is especially memorable for all the prurient reasons) and John Hannah, although it should be said that Hannah stretches his erstwhile gambling addict role into caricature instead of anything actually believable. The introduction of Dwayne Johnson as the film’s secondary villain, the Scorpion King (who would prove popular enough to warrant his own film only a year later) is cool and all, but poor Johnson must rue the effort put into his character’s final sequence in the movie. Throw in a darkly handsome Oded Fehr (Resident Evil: Apocalypse) and a throbbing Adewale Akinnuoye-Agbaje, and you have a cast of such talent and breadth a single film can barely contain them. 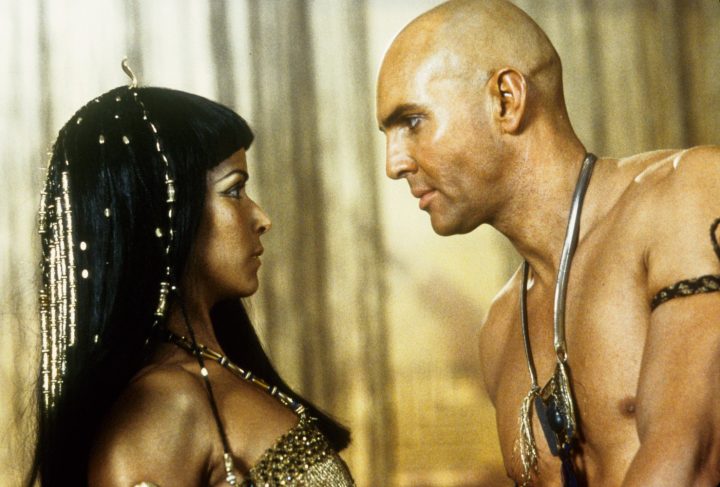 In keeping with the franchise’s established period-adventure aesthetic, Sommers keeps his film grounded in a similar visual style, again prioritising daffy CG effects instead of practical monsters and giving the film’s inherently cheesy vibe a thoroughly embellished verbosity that saturates an otherwise pulp-fiction story with muscular editorial dexterity. The film’s grandiose musical score, in which Alan Silvestri replaces Jerry Goldsmith at the composers desk, is an assault of brass and percussive excess, a swirling dervish of Berlioz-esque romanticism and thunderous modernity. Action sequences are especially voluminous, frantic and yet comprehensible (are you seeing this, Paul Greengrass?) and engagingly thrilling. The film contains not one, nor two, nor even three major sequences but an entire platoon of larger and larger event scenes that encompass the thrill-ride mentality Sommers employs to terrific effect. Be it a library-bound sword fight between Fehr’s Ardeth Bay and Akinnuoye-Agbaje’s Lock-Nah, or a London double-decker bus monster brawl, or a cavernous dirigible pursuit, The Mummy Returns is breakneck paced and wants for nought of subtlety or nuance.

Sommers gets that a film needs to build towards something, and he does, with the finale offering a caterwauling collision of all the film’s major players in a multi-thread conclusion that builds and builds until it threatens to tear the screen apart. It’s here that the film’s most infamous parting shot occurs: the emergence of the highly touted Scorpion King in pure digital form (imagine a really shitty computer game avatar of Dwayne Johnson, only with a scorpion torso and virtually no charisma) is one of the worst examples of CG replacing practical effects ever put to the screen. It’s rumoured that the film ran out of both time and/or money to finish several crucial shots in the sequence, resulting in a sub-par visual effect that is routinely high on people’s “worst CG in movies” lists. Given its status as a tentpole studio release, the fact they allowed something this shoddy to pass onto the public is simply unforgivable. Revisiting this dumpster fire of an effect on BluRay is even worse. Ugh. It hasn’t aged well at all.

The Mummy Returns is a glossy, slick, highly engaging action romp that boasts aggressive sound mixing and musical scoring, terrific editing and engaging (if underused) characters to populate its widescreen story. Sommers directs the shit out of this movie and while it might not offer the same simple thrills of its predecessor, the “louder, faster, cooler” approach appears to work superbly under his guiding hand. It’s a similar manner in which he directed Van Helsing (to considerable failure), but here he has characters we love, and a premise we really enjoy. Load up The Mummy Returns and prepare to be blown apart by its excess and extravagance; as a modern movie sequel, it’s hard to top.