Heading into Power Rangers, my initial feelings about this long-running franchise – til now, some 20+ seasons of television and a couple of dispiriting feature films providing children (and adults) an entire generation of ass-kicking entertainment – primarily hinged upon two things: that the franchise was exceptionally cheesy, and that the 2017 “refresh” film would find me lost amid context-free shenanigans that I’d only understand were I steeped in the saga’s lore. Pleasingly, director Dean Israelite (Project Almanac) avoids the brand’s overt campiness and delivers an energetic, slick film that, while desperately cliched and predictable, is as rousing a rollick as you might desire. 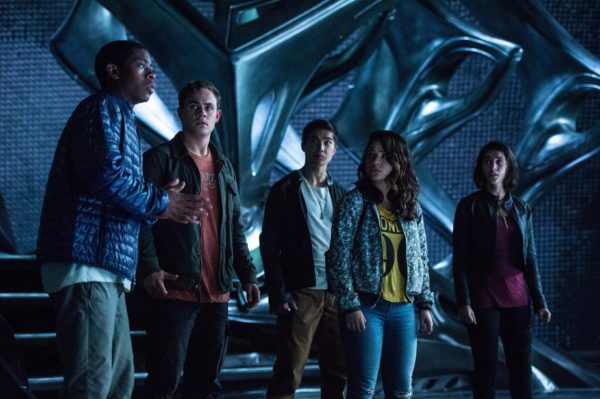 Angel Grove, small-town America; high school football star Jason Scott (Darce Montgomery) wrecks a promising career in a car crash escaping the police following a prank. Embittered, he is sent to weekend detention, where he meets fellow “inmate” Kimberly Hart (Naomi Scott), a former cheerleader now ostracised by her peers following an apparent physical altercation. Fellow student Billy Cranston (RJ Cyler), who is partially on the spectrum, assists Jason with his house arrest situation, and the three become friends. A roguish rebel Zack (Ludi Lin), who has been watching local tomboy Trini (Becky G), is on hand when the group accidentally uncover a mysterious buried spacecraft; aboard, they meet a robotic lifeform named Alpha 5 (voiced by Bill Hader), and the intelligence known as Zordon (Bryan Cranston), last remaining inhabitant of the Earth to see the cruel Rita Repulsa (Elizabeth Banks), who has returned to life to remove a precious gem and destroy all life on Earth.

As unfamiliar as I am with the Power Rangers franchise, and believe me I’m deeply, deeply unfamiliar with it, this film feels like a bizarre mix-tape of every 80’s John Hughes film ever made, combined with a pretty solid riff of Chronicle’s superpowered extremities, and a slew of comic book movie tropes. Still, despite being able to spot just about every story beat coming a mile away, the film managed to be an exciting and occasionally excellent teen-centric adventure that fans of the series will delight in, and non-fans will find plentiful entertaining anyway. 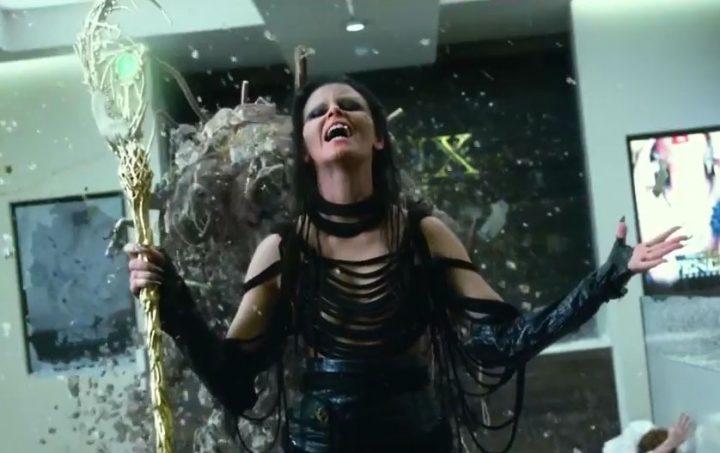 The risk a film runs if it wears its heart on its sleeve is that it can trip up trying to be all things to all people, earnestness morphing (sorry) into campy delirium unless it’s played exactly right: Power Rangers plays things exactly right, an earnest action romp that strums inelegant emotional weight and simplistic friendship motifs to deliver a rousing adventure film (and origin story) that deserved far more plaudits and commercial appreciation than its cinema release afforded. It’s briskly plotted – screenwriter John Gatins taps into the feeling of youth and disenfranchisement and accentuates its strengths whilst parlaying Rita Repulsa’s villainy to broad-scope histrionics, and Banks has a ball in the role – and directed with urgency and stylish agency by Israelite, who embraces the inherent silliness of it all and makes risible lines such as “they still haven’t found Krispy Kreme yet” actually work. Surprising, but true.

Key to the film’s success is our empathy with the quintet of lead actors and the characters they play; none of them are known talent for a big-budget film, but they acquit themselves well considering what the script demands of them. Montgomery plays the fresh-faced leader of the group – a kind of blonde Freddy Prinze Jr – and does a solid fist of making his angsty character work, while Naomi Scott, as Kimberly, is blandly interesting in that ubiquitous dark-eyed minx way. Ludi Lin has about the best subplot backstory of the group, with a sick mum at home in the trailer part, and Becky G’s inexplicably mediocre “possibly gay” sidebar is pushed aside for much of the film. RJ Cyler is the default token black-guy-comic-relief role, who does provide more than his share of chuckles (although the film is never outright funny) at the expense of depth of character.

But you’re not here for deep and meaningful conversation. You’re here for morphin’ and rangers of power, right? Power Rangers takes its time getting there after the standard obligatory team-up trials and tribulations, but Israelite’s film absolutely delivers kick-ass battle sequences. Sure, they’re totally OTT and utterly nonsensical, and accompanied by a soaring, hysterically grandiose score (by Brian Tyler) that punctuates the CG-heavy spectacle. The film’s roller-coaster final act is pure B-movie cheese that slam-dunks the ending. It’s more along the lines of Civil War’s airport battle than the Doomsday finale of Batman V Superman, if you can interpret my appreciation for the voluminous spectacle of five armoured teens doing battle with a gigantic gold-and-lava monster (Goldar, it’s called apparently) and decimating Angel Falls’ main street. It’s a nonsense, but divertingly engaging nonetheless. Gratifyingly, the filmmakers toned down the bright pastels of the original characters’ costume designs and give us sleek, deeper-hued mechanised variations, which goes a long way to muting the potential for cheesy indifference among less enthusiastic viewers.

The film tips its hat to Die Hard, Transformers (especially Age Of Extinction), Volton and riffs on Man of Steel’s Smallville battle, as well as Chronicle’s experience of “first flight”; as I said, Power Rangers is a film that owes much to its conglomerate of ideas, never offering a new concept when it can blatantly steal from others, but it just works. Enthusiasm and the right balance of winking humour and never overthinking itself makes Power Rangers a blast of silly fun.