The ultimate Mexican standoff transpires in Free Fire, the latest action thriller from High Rise helmer Ben Wheatley. In what can only be described as a sound designer’s wet dream, Free Fire’s gunplay and honest-to-goodness pulp transcript elevates a pedestrian plot and provides it with gritty wit and a charm that will undoubtedly elevate it to cult classic. It’s not a flawless film – and it’s no High Rise or A Field In England – but Free Fire’s hyperbolic camerawork and dead-on hilarious black humour are entertaining enough to captivate throughout the film’s relatively pacy 90 minute runtime. 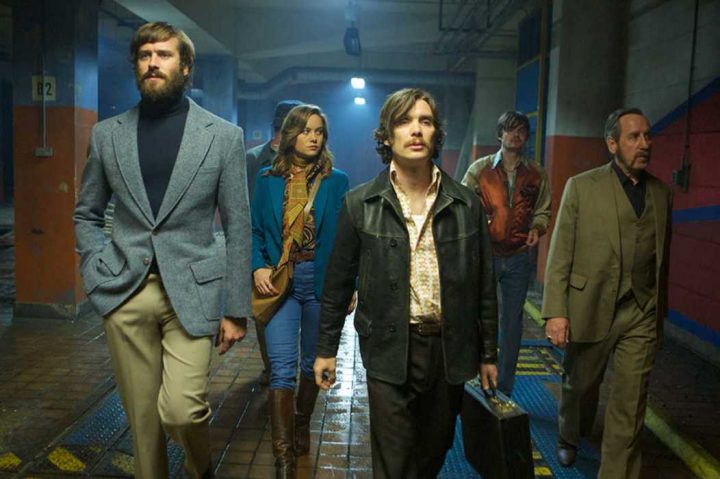 A gang of Irish criminals, led by Chris (Cillian Murphy) and accompanied by Justine (Brie Larson), Frank (Michael Smiley) and a pair of drug-addled reprobates in Stevo (Sam Riley) and Bernie (Enzo Cilenti), set up an illegal weapons purchase with idiotic South African sales man Vernon (Sharlto Copley) and American associate Ord (Armie Hammer). When one of Vernon’s henchmen, Harry (Jack Reynor) accuses Stevo of assaulting his cousin, the meet goes pear-shaped, leaving the entire group scattered around the giant abandoned factory they’re in firing off shots hoping to kill each other.

Violent, excessive, fun. These are the three determining words that’ll stay with you as Free Fire winds down to its inevitable, bloody conclusion. In many cases, a story like Free Fire would make a terrific short film, and stretching a simple premise out to a feature often tests the limits of narrative stoicism to fracture, particularly with this film’s roster of cons, crims and reprobates making for an unlikely “likeable” bunch. The screenplay, by both Wheatley and Amy Jump, has moments of greatness (particularly the beginning, and the finale) but they make the fatal flaw in this post-Tarantino age of “cool crime” by not giving us a character we actually like. Cillian Murphy’s caught-in-the-crossfire IRA buyer is about as close as we get, with the role finding the humanity in the insane scenario moreso than any other. Largely, the film is centred around its premise, with the idea being the focus rather than the characters involved, and at times Free Fire feels more like Wheatley’s homaging Tarantino more than he is giving the film his own style. 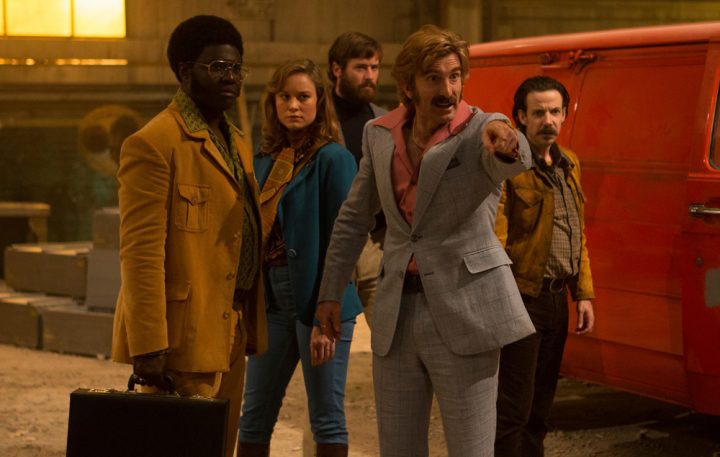 Basically, Free Fire is a bunch of people shooting at each other around an abandoned factory for 60 minutes, with a brief set-up and closing sting to bookend the proceedings. Now, in any normal sense this gun frenzy would get my blood pumping, and as the film progresses the bullets sha-wing and the ricochets pa-zing throughout what is an endlessly effective surround sound mix, but eventually the continued ballet of ill-aimed shots and haphazard wounding of the various cast members becomes tedious. There’s ingenuity to spare here, at least in terms of the physicality and environment the film occurs within, and Wheatley makes sure we hear, feel and see every single shot throughout the cavernous space. But reiterating: the cast, while admirable and certainly eminently watchable, are given very little emotional beats to work with other than pure survival, and it’s this lack of empathy that gives Free Fire its sense of dourness.

Since his breakout role in District 9 and then The A-Team, Sharlto Copley has become an actor to watch. When he’s not supporting fellow South African Neil Blomkamp’s film projects such as Elysium and Chappie, he’s appearing in supporting roles such as Maleficent and Oldboy, always odd and altogether hilarious. His turn as Vernon here, a misdiagnosed genius (essentially, he’s not a genius, and exactly the opposite) with visions of grandeur despite relatively little ability, is the film’s gut-busting laugh. Every snicker, sideways glance and half-whispered aside, together with Copley’s trademark eye glint, makes Vernon the most annoying and irrationally terrific Bad Guy in the film, and Copley is tremendous in the role. Former Room occupant Brie Larson plays the only woman in this sausage-fest, as the mysterious Justine who uses her feminine wiles to get her way (most of the time). Armie Hammer’s suave Ord, the high-fashion dilettante who’s trying to walk Vernon through the exchange without him screwing it up, is also terrific, offering stoic precision within the film’s gargantuan shoot-out sequence. 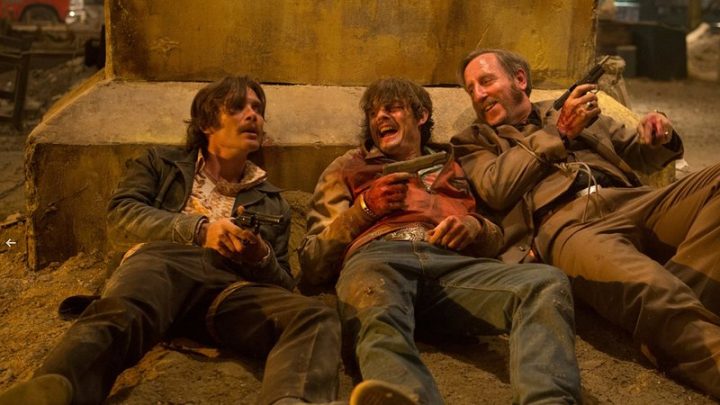 Bit parts to Transformers: Age Of Extinction co-star Jack Reynor as Harry, Aussie actor Noah Taylor as Gordon (one of Vernon’s lackeys), and Irish actor Michael Smiley (The World’s End and The Hallow) give the film a distinctly continental flavour (the film is set in Boston in the 70’s, so much of the costuming and weaponry are of the period as well) and Wheatley uses each of them in amusing and entertaining ways despite their relatively limited screen time. Keep a sharp eye for one-time Patriot Games star Patrick Bergin as an aging mercenary out to spoil the party – you won’t recognise him (I certainly didn’t) but his part is memorable to say the least.

Despite a sluggish middle act and character with limited appeal beyond being rough-house criminals, Free Fire is a blast to watch. Wheatley’s command of the camera in keeping us engaged with these characters as their night turns to shit is exemplary, and his use of editing and set design, particularly keeping his actors in our eyeline at all times, is tremendous. As mentioned, the sound design on Free Fire is probably the best thing about it, with its use of surround channels to position the viewer into the midst of the action being heightened to a fantastic degree. Cinematography, whilst dark and depressing, is excellent by DOP Laurie Rose, and the film’s use of music (especially an iconic John Denver number) is mostly subtle and sombre.

Contemporary crime cinema doesn’t get much more stylish than this; the genetic material of Tarantino and early Guy Ritchie are embedded in Free Fire’s nutball crazy plot, and populated with obliquely familiar whacko characters are what makes the film sing. Sure, it’s no masterpiece, and I wager Wheatley has more important films to come along soon, but for the simple story and rock-solid production value there’s no denying this film is a blast of pulp entertainment that’ll have you grinning.