Let’s face it: the idea of an animated, baby Alec Baldwin riffing on the same character he played in Glengarry Glen Ross, only without the cursing, was always going to sell to a studio executive. Sadly for that executive – or whoever it was that greenlit this turd – the end result is a film that might earn back it’s budget and then some, but will have the cultural impact of a lower Top 40 pop song or a direct to DVD indie film. Aimed directly at children, The Boss Baby is slick, eye catching and noisy, but lacks the adult-oriented thematic panache of Pixar or recent Disney to really give it any staying power. And in a world dominated by a glut of new film releases vying for eyeballs, or a studio hoping to catch the Next Big Franchise Thing, this film was never going to last long. 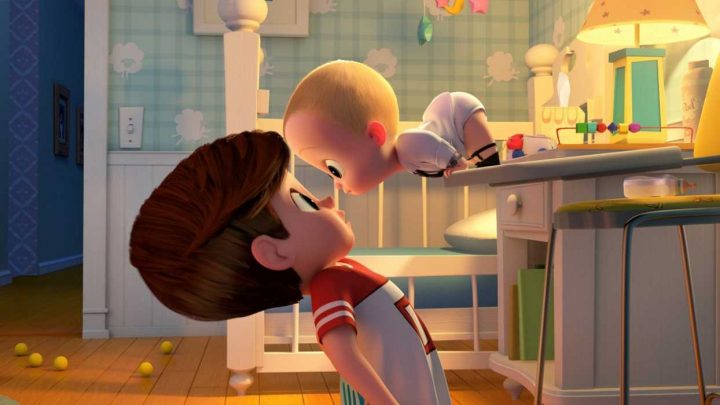 Young Tim Templeton (Miles Bakshi) lives with his parents, Ted (Jimmy Kimmel) and Janice (Lisa Kudrow) and has all the love an attention he could desire. So it angers him to suddenly find himself lumbered with a younger baby brother, a talking infant with the voice of Alec Baldwin who goes by the name Theodore, a bespoke suit-wearing cherub with ulterior designs than being a happy, well adjusted sibling. Tim and Theodore initially exchange violent attacks, before realising that Theodore’s mission on Earth (there’s an entire world of babies up in some weird Heaven where they work in an ethereal office tower) is to prevent Ted’s company from releasing an uber-cute puppy to steal adults’ attention from wanting babies. What? Yeah, I think so. Imagine Storks only without the storks and all the birds are babies and humans are idiots.

This movie is shit. Not the kind of low-budget, poorly acted so-bad-it’s-watchable shit like Sharknado or (bless it) Showgirls, but absolute, dire, laughably terrible shit you just know is designed to sell toys and playthings to your kids and not much else. It’s a gaudy family story dressed up in whizz-bang colours and eye-popping animation, but there’s no escape from how destitute this thing really is. For a start, the premise is idiotic. No, not in an Emoji Movie kind of idiotic, which is its own special idiotic and the less said about it the better, but the idea that there’s a bunch of baby gods high above us working to protect humanity from…. what, puppies? Who thinks up this garbage? It’s a napkin-sized plot developed into 90+ minutes of poop, fart, mucus and cloying “we’re not a whole family without you” claptrap that becomes tedious and predictable and tiresome, and entirely without any sense of authenticity.

Boss Baby mashes Pixar’s Inside Out with any number of Brady Bunch episodes and a slew of too-adult-for-kids-but-too-stupid-for-adult jokes that land with a thud more often than they hit. The script, written by Michael McCullers (who write the last two Austin Powers movies as well as worked on the Mr Peabody & Sherman screenplay), is a thinly developed and utterly implausible (even for an animated film) idea generating rapid-fire poo jokes and glossy, high-vis moralising about children accepting newcomers into their families, betwixt fairly banal characterisation and the resting-on-his-laurels work of Alec Baldwin.

Let’s face it, Baldwin gets plaudits just for turning up to the set each day, and it’s hard to see him having to stretch to really deliver a performance as the titular Baby. It’s such a lazy, uninspired casting choice, performed by an actor who sounds like he’s woken up in a grump to find a microphone and a contractual obligation stuffed in his face, and if you find Baldwin’s work in the aforementioned Glengarry Glen Ross to be a career highlight, then you’ll cringe as he bastardises that classic performance with this inanity. Miles Bakshi squeaks his way through a typically maladjusted American-kid routine, co-stars Jimmy Kimmel and Lisa Kudrow as as bland as butter as Tim’s parents, and the roster of supporting vocal talent does their best to bring width to what is essentially a one-man, one-joke show.

Dreamworks haven’t had that many critical successes of late – once Shrek bit the dust, they mined those increasingly stupid Madagascar films into the ground (the Penguins movie was good, but hardly going to start its own franchise) and have struggled to give us more than two excellent How To Train Your Dragon movies. The rest of their output, Kung Fu Panda included, has been largely lost in the noise of the yearly film cycle, with their last truly great original film being that Wallace & Gromit feature with the Were-Rabbit. My opinion, of course. The Boss Baby is easy-listening cinema, a diet-Coke of shit-jokes, Baldwin’s too-cool-for-school delivery (that becomes boring quickly, which is surprising) and hackneyed message delivery (don’t drop babies on their heads, perhaps? I still don’t know!) wrapped in a covering of slick Hollywood production value. It’s a one-joke premise taken way too far, the kind of thing Walt Disney would have wiped his ass with in a pitch meeting, only now we’re living in a world where this shit actually makes it to a cinema screen.