Director :   Nacho Vigalondo
Year Of Release :   2017
Principal Cast :  Anne Hathaway, Jason Sudeikis, Dan Stevens, Austin Stowell, Tim Blake Nelson.
Approx Running Time :   110 Minutes
Synopsis:  Gloria is an out-of-work party girl forced to leave her life in NY and move back home. When reports surface that a giant creature is destroying Seoul, she gradually comes to the realisation that she is somehow connected to this phenomenon.

This review does contain spoilers for Colossal. Do not read on if you wish to remain unspoiled!

Colossal isn’t the film you think it is. If you’ve caught any of the marketing for this flick, you’ll know it’s about Anne Hathaway inexplicably controlling a giant kaiju monster terrorising Seoul, in Korea, via some kind of telepathic link. Colossal is indeed that film, but it’s a whole drawer of something else entirely as well; Jason Sudeikis’ lead role ventures into territory I was actually surprised with, considering the initial tone of Colossal’s whimsy and black humour, and although I felt the juxtaposition of the creature’s antics and the dark nature of the central plot (no, the monster isn’t the central plot of Colossal) didn’t quite mix as well as I’d have liked to make this an enjoyable film in the true sense, there’s enough within Colossal’s wry narrative and winking-at-the-audience aesthetic to make it something of an underground cult classic. 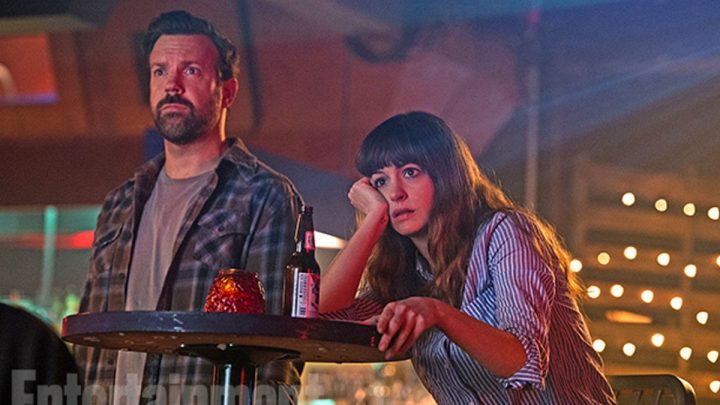 Hathaway plays Gloria, a blackout drunk unemployed writer, who is kicked out of the fancy apartment she shared with boyfriend Tim (Dan Stevens), and returns to her small, middle-American hometown to “find” herself. She meets up with childhood friend Oscar (Sudeikis), who now owns a bar and enjoys late night drinking with his two friends Joel (Austin Stowell) and Garth (Tim Blake Nelson). After several late night sessions, Gloria wakes to find news of a giant destructive monster wreaking havoc in the South Korean city of Seoul, a sensational global event that captures the attention of everyone. Through a series of clues, Gloria realises that whenever she enters the town’s playground at exactly 8.05am, the monster appears in Seoul, a realisation she’s initially amused by until she comes to understand how many people she (ie, the monster) has killed in its blundering venture. Seeking solace in the company of her friends, to their amazement they uncover the fact that Oscar too manifests a giant robotic creature in Seoul when he attempts to do much the same.

So yeah, Colossal feels like the preamble for a sequel to Pacific Rim or an offshoot Godzilla movie, but it really isn’t that. The giant destructive creature motif mirrors much of the human drama at play in Colossal’s framework, offset by a dark streak of humour running through the juxtaposition itself. Hathaway’s Gloria is an unapologetic drunk, obviously unwilling to make changes in her life until she “becomes” the giant monster, after which she goes onto the wagon. Her relationship with Oscar is one of convenience initially – he rescues her from unemployment and being socially ostracised – until it becomes apparent than Oscar’s controlling nature, which manifests with withering fury towards the mid-point of the film, is set to determine much of the film’s plot. Gloria makes for an iniquitous heroine, with the script making her both a lush and a sponge to the point we really don’t care for her fate other than she’s played by Anne Hathaway; had it been another, lesser known actress, this film would have stunk.

Sudeikis, an actor I think has far better range and ability than the vast array of his filmography to date would indicate, gives the role of Oscar a solid rooting in familiarity and hidden evil. Oscar’s a manipulative asshole, the kind of domestic abuser you read about in the news, and the fact he’s willing to blackmail Gloria into staying with him under threat of destroying half of Seoul, is one of the darkest moments Colossal’s otherwise melancholic storyline throws up. Sudeikis sells the role, although the latter third of the film deteriorates significantly as Oscar becomes more a caricature than a well rounded character. Still, Colossal’s core throughline isn’t about domestic violence or abuse, it’s about control: Gloria’s control of the monster, and the monster (Oscar) controlling her.

Directed by Spanish helmer Nacho Vigalondo, the man behind schlock genre entries The ABC’s Of Death, Open Windows and VHS: Viral, Colossal evokes a mild feeling of sentimentality or nostalgia, mainly through Gloria’s trip back to her roots – in saying that, the film remains rooted in the dynamic between only four people, rather than dwelling on the wider community she re-enters. It’s a film content to remain small in scale (the creature effects aren’t on par with Pacific Rim, by a long shot, but aren’t awful by any stretch) and this gives it a bucolic feeling of quaint small-town intimacy. If there’s a deficiency to the film, it’s that none of the characters feel particularly developed, including Gloria, whose past and personality are more or less generic even with Hathaway’s “kooky” screen persona oozing from every frame. Seeing Tim Blake Nelson appear in any film is always a bonus, but he feels wasted here. Scenes involving the quartet of late-night drinkers gobbing off around the bar are inconsequential to the plot, and yet are numerous enough to warrant inclusion.

Colossal is a film of bizarre tone and outright barmy execution. It’s a low-budget indie film offering the most obscure essaying of control motives ever seen, at least by me. The fun of giant kaiju crashing into the streets of Seoul give way quickly to a darker, violent edge to the movie, and this off-key shift in emotional weight to the story might throw off some (read: many) viewers. But it’s a film well worth a look; a friend described it as “odd”, and I think that’s as accurate and simple a review as one can give it.