Director :   Fabio Guaglione + Fabio Resinaro
Year Of Release :   2016
Principal Cast :  Armie Hammer, Annabelle Wallis, Tom Cullen, Clint Dyer, Geoff Bell, Juliet Aubrey, Ines Pinar Mille, Luka Peros, Daniel Sandoval.
Approx Running Time :   106 Minutes
Synopsis:  After a failed assassination attempt during a mission in North Africa, US soldier Mike Stevens finds himself trapped on a land mine. If he moves, the mine will explode. Exposed to the desert elements, he must survive the dangers of the desert and battle the psychological and physical toll of the treacherous conditions, remaining motionless for two days waiting for help.

If only Don LaFontaine was alive to voice the trailer for Mine. It’s right up inside his wheelhouse: “In a world where every step could be your last, one man’s foothold on life hangs by a bootlace.” I giggle just thinking about it. One thing I can’t giggle about is Mine, a war film of a different kind hidden beneath a survival story wrapped up around Armie Hammer’s dependable, stoic performance as stranded soldier Mike Stevens, about as bland a nomenclature as you could hope for for this good ol’ ‘Murican boy standing in a desert with one foot on a landmine. Mine occupies similar territory to other Man Alone ventures, including Cast Away, Ryan Reynolds’ Buried, Tom Hardy’s Locke and in some manner, Hitchcock’s Rear Window: the story revolves around the central character’s lack of movement within a specific landscape – here, the sand-blown vistas of some random Middle Eastern country – and the emotional toll both his environment and mental anxiety places upon him. 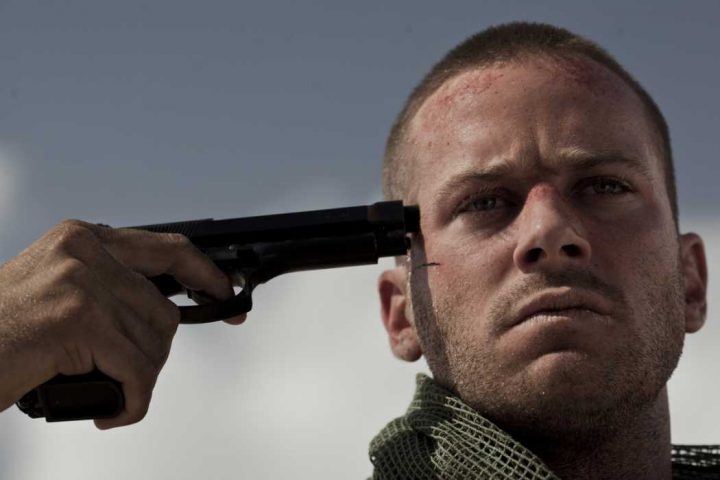 US Sniper Mike Stevens (Armie Hammer) and spotter Tommy Madison (Tom Cullen) are on a mission in a far flung desert to assassinate the leader of a terrorist cell (Agustrin Rodriguez), when an attack of conscience gets the better of him, leading to abort the mission. Escaping imminent pursuit, Mike and Tommy venture towards an extraction point some hours away, before realising they’re walking through an area littered with land mines. Unafraid, Tommy badgers Mike about his life – with fiancee Jenny (Annabelle Wallis) – until he steps on a mine and blows off his legs. Mike almost immediately also steps on a mine, activating it; he stops, agitated. As Tommy succumbs to his wounds and the thought of never seeing his son again, Mike finds his superiors unwilling to spring to his immediate rescue, offering a 52 hour window until extraction. Stranded in the desert, with wolves and a nearby villager for company, Mike has to wait out his rescue against hostile elements and discovery by his former target.

Mine suckered me in, good and proper. For a military movie I expected a fair bit of cheese, and a whole swag of hoo-rah masculinity, but what Mine offers is a far more compelling human story than I’d wager you’d give it credit for. Hammer, generally something of a kiss-of-death for a film’s success, gradually unwraps the layers of Mike Stevens’ life as the film progresses and his situation becomes more dire, and it brings with it a sense of humanity that really resonated with me. Hammer starts the film as something of a clench-jawed block of wood, unwilling to reveal himself to Tommy (or us) as he harbours a simmering anger; flashbacks are used to indicate Mike’s relationship with his fiancee was left on a rocky note, and it’s through his test of will and endurance, we witness Mike come to understand himself more.

Mike’s desert companion, a weird, clownish Berber native (Clint Dyer) questions the soldiers reason for being in the desert, a conversation continued over several days. Through this, it allows us to get to appreciate Mike’s backstory – a backstory, I might add, that offers a touch of tragedy and humanity to what ought to have simply been a hardened military role; the post-traumatic stress of Mike’s childhood and the effect it had on his adult life starts to clarify as the film reaches its climactic moments, the analogous landmine echoing the hair-trigger with which he’s lived his life. It’s actually a compelling story, by and large, although soaked in B-movie charm it does feel a touch overwrought in some areas. 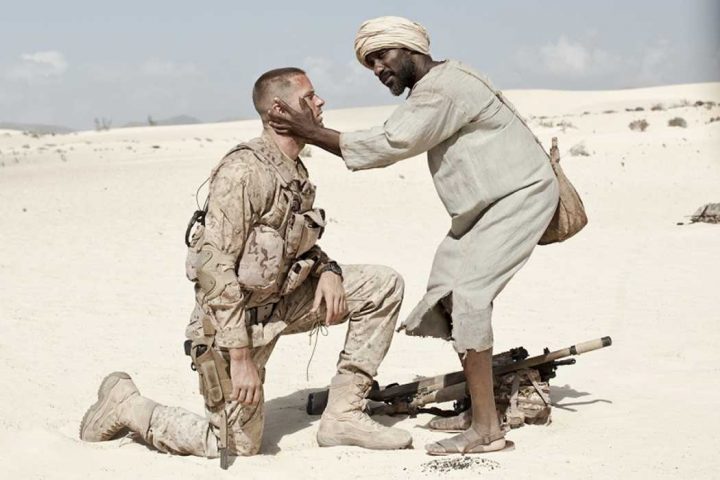 The film’s directors, Fabios’ Guaglione and Resinaro, give the film a real impact visually, the sand-blown landscape (shot on the Spanish island of Fuerteventura) an inhospitable tableau against this intimate story of man’s survival, and the film’s crisp cinematography (by DP Sergi Vilanova) evokes shades of Lawrence Of Arabia at times. There’s several CG shots that don’t quite make the grade (sand is bloody hard to pull off well, I’m guessing) but generally the film’s grit (ha!) and well paced tension more than overcome minor weaknesses. I will say, however, that Hammer’s performance really gives this film its appeal, despite everything else. It’s an at-times heartbreaking (if somewhat cliched) arc and he magnifies his emotional quotient superbly, with that final twist in the tale only serving to highlight just how good an actor he can be with the right material and a director (or directors) giving him the breadth he needs to work with it.

Mine is a surprise package from the get-go: it’s a largely white-knuckle ride of tension and worry, tinged with melodrama and heartbreak, and intertwines inbuilt terror with hopeful humanism. Hammer delivers a really nice performance, he’s aided by a sweet Clint Dyer, and the ratcheting plot device of “will he survive to make it home to his girl” never goes where you think (or at least, where I though!); overall, a compelling, entertaining, seat-of-the-pants flick destined to be underseen and underenthused but worthy of some time and attention.