When he’s not making dopey alien invasion films, Peter Berg’s focus appears to be on real-world tragedy, particularly Lone Survivor (with Mark Wahlberg), Gulf Of Mexico disaster-flick Deepwater Horizon (again, with Mark Wahlberg), and here with one of America’s recent terrorist attacks, the 2013 Boston Marathon bombing – dear Lord, it’s America’s cinematic saviour, Mark Wahlberg. Patriots Day solemnifies the events of that awful day – a day we all watched play out in real time, followed by the city-wide manhunt for the perpetrators – and Berg’s direction wisely eschews overt chest-beating and maintains an air of truth and heart to the story, told through the eyes of Wahlberg’s BPD Sergeant Tommy Sanders. Compelling, heartbreaking, and honestly rather visceral, Patriots Day deserves more attention than it received with its lacklustre box-office. 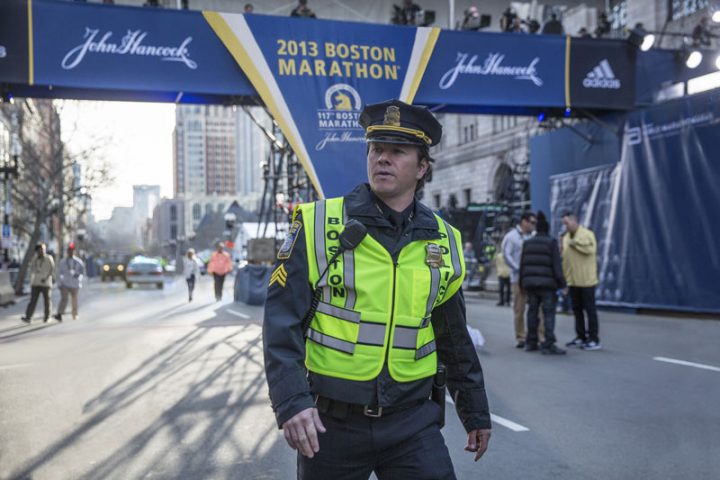 April 15th, 2013: the city of Boston gears up for its annual city marathon. BPD police officer Tom Saunders (Wahlberg), attending the finish line as part of the department’s meet-and-greet crew for the dignitaries, witnesses two explosions rip through the crowds lining the streets, scattering bodies, limbs and runners everywhere. Commissioner Ed Davis (John Goodman) and FBI Special Agent Richard DesLauriers (Kevin Bacon) run point on the investigation, as the search for the bombers’ identities, and then there whereabouts, takes place over several days of intense public scrutiny. The bombers, brothers Dzhokhar and Tamerlan Tsarnaev (Alex Wolfe and Themo Melikidze respectively), hijack a car and go on the run, before they are cornered by the pursuing police and taken down before the world-wide media.

If nothing else is achieved by Patriots Day, it’s that JK Simmons is regarded as the coolest badass currently working on the big screen. His extended cameo as Watertown PD chief Jeff Pugliese, who took down Tamerlan Tsarnaev is one of the single best cheer-worthy moments of any film in the last 12 months. Simmons aside, Patriots Day’s faithful recreation of both the marathon and bombing, as well as the ensuing manhunt through the streets of Boston, is electrifying despite foreknowing the events as they transpire. I’m not sure how much liberty has been taken with the facts as they stand, but Berg’s hit-parade of evidence towards the events of the day make for compelling and… dare I say it, patriotic depiction that resonates, and resonates well when it has every right to take the grand-standing high road. 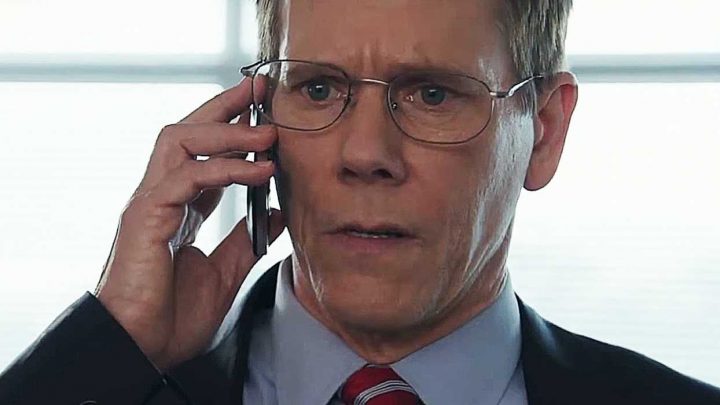 The film is based on the book Boston Strong,written by Casey Sherman and journalist Dave Wedge, with the screenplay delivered by director Peter Berg, and co-writers Matt Cook and Joshua Zetumer. While the film focuses primarily on Wahlberg’s fictional character, a composite of real people who worked on the investigation, the blending of real-world characters into the narrative provides contextual breadth to the story aside from Tom Saunders’ emotional arc. Wahlberg provides the film’s resolute core, as close to a human extrapolation of the eponymous “Boston Strong” motif that arose in the hours following the attacks. While he might be a fictional character, Saunders epitomises the legacy of the BPD and the dedication to their work in hunting down the brothers attempts to flee from justice. Wahlberg offers a distinctly nuanced performance, bringing depth to his role as well as a pivot point for the viewer’s emotional journey from initial apprehension, to shock, overwhelming sadness and eventually lock-jawed euphoria as the cops take down Dzhokhar as he hides in somebody’s boat.

Patriots Day had to achieve several things in order to accomplish its task. Foremost, it had to pay tribute to those killed, injured or otherwise affected by the events of that day, with respect and a genuineness some films often lose amid the hubbub of salaciousness or overwrought melodrama. Patriots Day doesn’t slip into melodrama, with Berg’s solid direction giving us information as required and pathos, drama and outright humanity when the time is right. It honestly portrays the people involved, from the Massachusetts Mayor to the cop on the street, as well as the pivotal moments in the pursuit of the terrorists. Although fundamentally a Good Guy vs Bad Guy plot, Patriots Day involves us tacitly in the brothers’ plotting, gives us a sidebar plot in Tamerlan’s Muslim wife, Katherine Russell (Supergirl’s Melissa Benoist), and pays on-screen tribute to slain MIT Officer Sean Collier (Jake Picking) and car-jacking victim Dun Meng (Jimmy O Yang). It widens the potential for simplistic “hoo-rah cowboys” storytelling with the gun-cocked Boston PD rampaging through the streets and gives the story depth, a justifiably proud Bostonian-influenced sense of family that adds weight to the film’s integrity. If there are any weaknesses to the film, it’s the baffling inclusion of Saunders’ wife, Michelle Monaghan, who disappears from the movie almost as fast as she appears in it, and a trio of college room-mates’ of Dzhokhar’s, who were incarcerated for perverting the course of the investigation after they tried to destroy incriminating evidence – they’re portrayed as pot-smoking gamers, and while the film sets them up for something bigger, it never pays off. 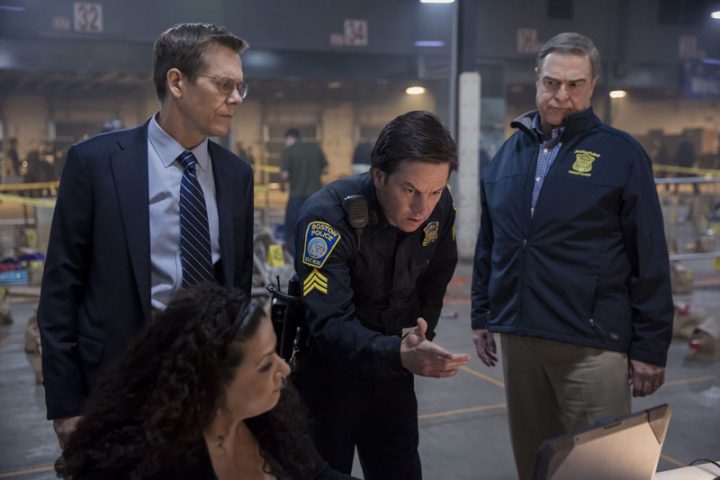 The second thing Patriots Day had to do was deliver the events in a manner that reflected the truth of what happened – or at the very least what we believe happened. While no doubt some liberties were taken with the Tsarnaev’s storyline in terms of character, their movements and known actions are depicted well. Surprisingly, in a crucial moment of the film, the brothers are cornered in a Watertown suburban street by the police, whereupon they hurl homemade bombs a the officers, destroying several vehicles and injuring multiple officers, one critically. I hadn’t heard about this element of the story in any detail but subsequent reading indicates this was quite a brutal, concussive encounter, and one which resulted in the death of elder brother Dzhokhar. Berg’s action chops are brought to bear in this sequence, and he makes the shootout-explosion carnage feel legitimately frightening and confusing, which it must have been.

The majority of the film is primarily investigative procedural stuff, with lots of people looking at screens, talking into phones, and discussing elaborate CSI-style techniques to track down the men. In this, Berg also succeeds, ratcheting the natural tension of imminent breakthrough with continued, percussive musical score and tremulous, occasionally wrenching montages of the victims and the carnage left behind. The figure of a State Trooper standing over the body of 8-year old Martin Richard, lying on the sidewalk where he fell following the second explosion, and his salute as the ambulance drivers collected the slain child, absolutely broke my heart. It wasn’t the only moment I sobbed quietly to myself, either. The film touches on the loss felt by this terrible evil, but it also dwells on the hope and resolve of Boston – nay, America – to rise above these hideous acts and live in love, not fear. A moving sequence of images and titles towards the end of the film, showcasing the real people who are depicted in the film, twists your heart with pride knowing that these people lived through one of the most horrific events you can imagine, and came out stronger.

I’m more impressed with Patriots Day than I am with Berg’s previous films starring Boston-native Wahlberg. It’s succinct, doesn’t dwell on histrionics, offers a taut emotional arc to it, and as accurately as a Hollywood blockbuster can, depicts the events in question with enough raw grit to conjure up the feelings we all felt that day when we say the news. Berg’s direction isn’t flairy, Wahlberg restrains himself, and the sidebar characters and minutiae of the investigative storyline provide balanced, assertive context to a complex set of circumstances that continue to be probed. Patriots Day inexplicably stumbled at the box office, which is strange considering how well this film will play to the patriotism native to the United States citizenry – especially when it comes to terrorism – because it’s a well made, well-intentioned film that doesn’t appear to have an agenda other than displaying the courage and bravery of all those involved in it. 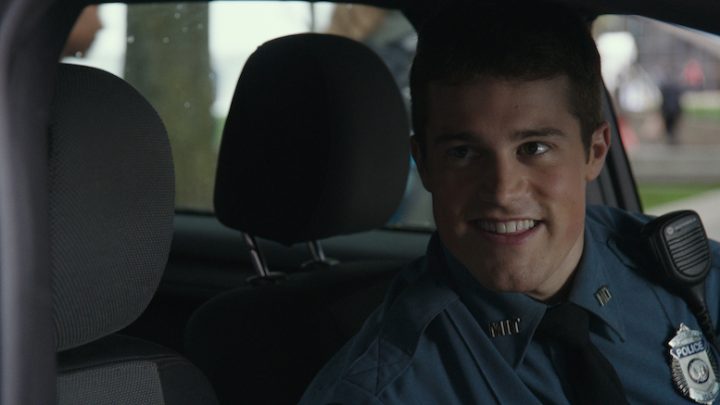