Principal Cast :  Hugh Jackman, Patrick Stewart, Richard E Grant, Boyd Holbrook, Stephen Merchant, Dafne Keen, Elizabeth Rodriguez, Eriq la Salle, Elise Neal.
Synopsis: In the near future, a weary Logan cares for an ailing Professor X in a hide-out on the Mexican border. But Logan’s attempts to hide from the world and his legacy are up-ended when a young mutant arrives, being pursued by dark forces.

This review discusses specific spoilers for Logan. Do not read on if you wish to remain unspoiled!

In the ever-changing landscape of comic book films, few constants have remained as resolute, as iconic, as Hugh Jackman’s Wolverine (aka, Logan). Against the countless iterations of Superman, Batman, Fantastic Four and the eponymous X-Men from which Logan is derived, Jackman’s gradually ageing, embittered superhuman mutant has remained a crowd favourite, with Jackman himself now forever linked with the property through 17 years of brawlin’ and cussin’. While the character hasn’t enjoyed a successful solo run as one might have hoped – the Origins film was abysmal, while The Wolverine (directed by Logan helmer James Mangold) was a slow-burn character piece that felt like a sidebar to the overall arc – Logan steps into the light as a particularly brutal, prescient final adventure for both Jackman and, in this incarnation at least, Wolverine. In 2029, former X-Men member Logan (Jackman) and Professor Charles Xavier (Patrick Stewart) live on the US/Mexican border; the future has seen the near extinction of mutants, and the Government is hunting Xavier for a hitherto unknown reason only alluded to as the “Westchester Incident”. Logan’s once-immortal body is showing signs of age, his healing ability is muted, and the weight of the world’s focus has left him drunk, embittered and angry. Xavier, meanwhile, is suffering a degenerative brain disease which causes him to have massive seizures, seizures which cripple those within the reach of his powerful mental abilities. So when a young mutant girl, Laura (Dafne Keen) is thrown into his life, Logan and Xavier embark on a cross-country trek to find the mysterious refuge known as Eden, where other mutants can gather and be safe. They are – of course – pursued by the nefarious minions of Zander Rice (Richard E Grant), led by the relentless Donald Pierce (Boyd Holbrook), who have designs on the gaggle of child mutants who escaped from a cruel Mexican facility some months before. On the scale of comic book films approach to their subject matter, with Nolan’s Dark Knight at one end of the scale, and Marvel’s cookie-cutter four-panel approach at the other, Logan favours the former firmly. Violent, meditative, emotionally resonant, James Mangold’s story of an ageing Wolverine and an even older Charles Xavier is a fitting capstone on the cinematic journey of the two most popular X-Men. Logan’s weary, scarred life echoes the physical scars he bears, over several lifetimes of persecution, heroism and familial love: in Logan, the “saviour” Wolverine has almost become a myth, or at least a cautionary tale, with both he and Xavier’s close paternal bond remaining strong even in the face of Charles’ mental deterioration. The pair live in a rusted out water tank in the desert, along with mutant mentalist Caliban (a terrific Stephen Merchant), eking out an existence of survival as if the rigours of their former lives have taken the ultimate toll. Indeed, for Logan, the long life he’s lived is slowly being poisoned by the very thing that gives him an edge – his adamantium skeleton. With his healing power on the wane (Logan walks with a limp for a majority of the movie) and the revelation that the adamantium has been slowly poisoning his body down the years, Logan has sunk into a drunken anger that barely simmers below boiling. Mangold writes the characters so very well: Logan’s love for Charles withstands the most abrasive conversations, a mutual respect earned through countless unseen adventures, but there appears to be some manner of resentment in Logan’s demeanour this time, as if he possibly blames Xavier for the loss of his friends over time. Xavier, for his part, is still coherent when not addled on seizure-prevention drugs, strenuously arguing that the “evil forces” are still in play and that they can stop them. In a way, the Charles/Xavier dynamic of Logan is fittingly melancholic. Both characters in their twilight, reduced to bit-players in a grander scheme, and resigned to the ill-fitting nature of their personas encapsulating the tragic nature of their existence. Logan takes a vastly different tone to previous X-Men films, in that it has a much harder edge. The film also has a bitter taste to it, masked somewhat by the bloody violence and casual swearing. With each swing of his claws, with each graphic slaughter and brusque cursory flip-off, Logan wears his soul on his tattered, bloody sleeve. Beneath the dusk-hued finality of the film’s emotional core, of Logan’s selflessness despite having no reason to be, the film resounds with the hopefulness that all is not yet lost. The stakes aren’t quite as strong as Mangold seems to believe they are, at least not to me, but the MacGuffin of the existence of Eden, and the race to get there, brings the film’s pursuit narrative into a story of rediscovery. Logan rediscovers the meaning to his life, or at least as much as he can with Laura’s backstory haunting him.

Midway through Logan, the three central characters pause at a hotel to catch a screening of iconic 50’s Western Shane, in which Alan Ladd’s titular character, personifying the very anti-hero Logan appears to be, gives hope to the young son of a farming family he helps defend against evil. Naturally, shades of Shane abound in Logan, as do a handful of other Western motifs, but none linger more strongly than the lonely outsider forced to defend the defenceless in spite of his own survival. Mangold plays with the motif by having Logan, Charles and Laura encounter a downtrodden farming family – led by former ER doctor Eriq la Salle – and rediscovering the essence of what it means to be a family. Unlike Shane, however, Logan cannot save the family from being butchered by a crucial cog in Zander Rice’s arsenal: a younger clone of Logan (played by a digitally de-aged Hugh Jackman, in a startling surprise for the film), who tears into all before him with a ferocity not seen since Jackman himself did as much in the early X-Men films. 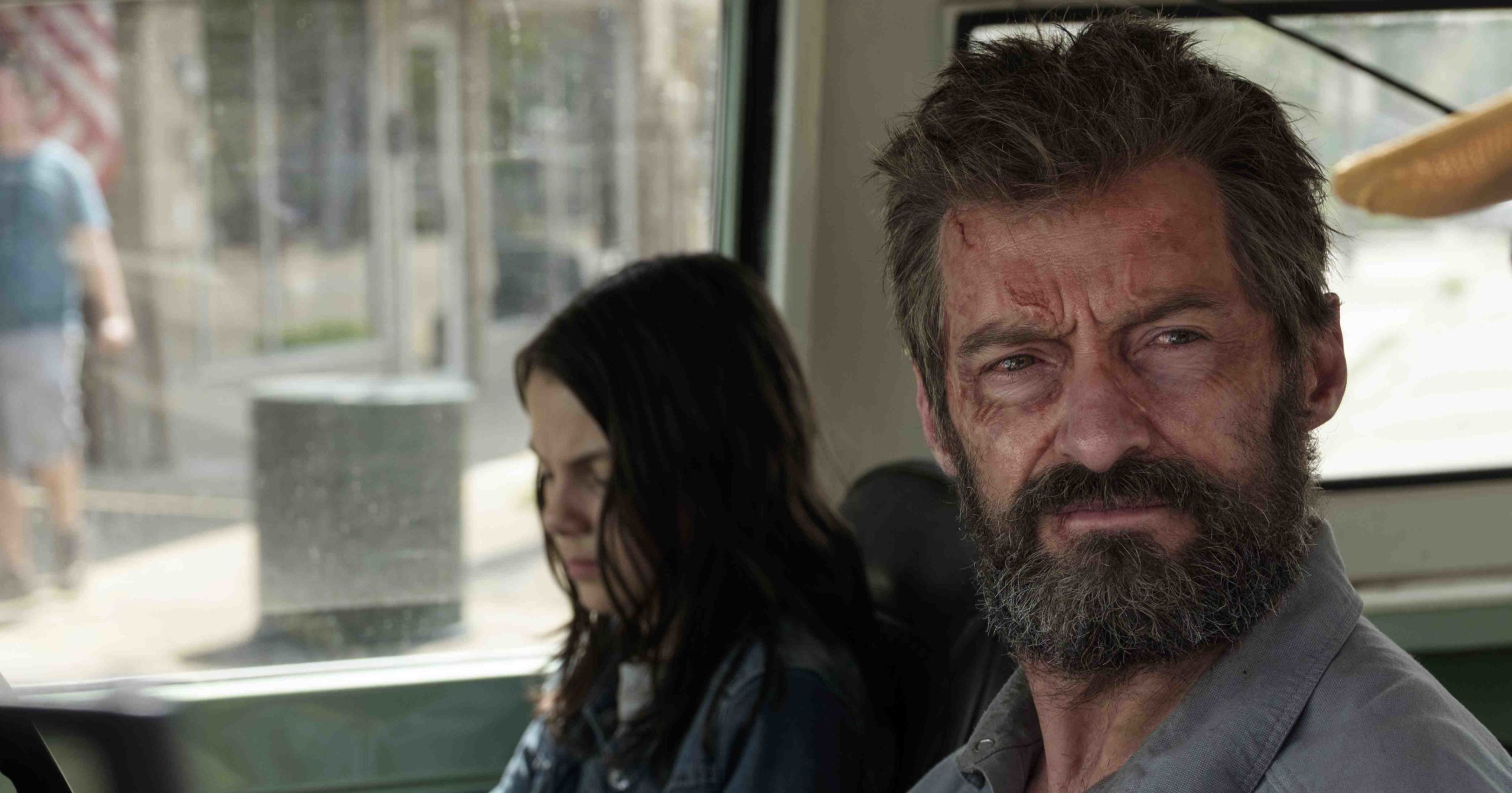 Speaking of Jackman, Aussie Hugh does expectedly solid work in the title role. In fairness, it’s not like he’s working with a blank canvas here, having played the role in a clutch of solo and ensemble films since Bryan Singer’s X-Men in 2000. The guy knows the role, inhabiting Logan’s battered, bruised body like a prize fighter refusing to fall down for the final count. Jackman also strikes the right emotional balance, giving Logan’s rage and anger (you know, the “you guys are soooooo farked when I get angry” mode) a justification instead of an unfocused latitude. Patrick Stewart delivers a heartbreaking performance as Xavier, mournful of the past and yet hopeful of the future in spite of the darkness enshrouding them, while young Dafne Keen, as mutant protege Laura (who sports a set of adamantium claws similar to Logan) offers solemnised youth despite a dearth of character development. Richard E Grant gets to ham it up as a clench-jawed scientist, Boyd Holbrook has a knockabout style as Logan’s chief antagonist, and naturally we tip our hat to the various stuntmen and background extras caught up in Logan’s various killing sprees, for their dutiful evisceration at the hands of Marvel’s preeminent mutant. Unlike all other films in this franchise to-date, Logan heads into Deadpool territory with bloody, hyperbolic violence. For a dude with adamantium claws and a penchant for physical confrontation, how has it taken until 2017 for us to get an outright adult Logan movie? Throats are slashed, limbs torn asunder, heads impaled and sliced off, and bodies fly through the air during Logan’s action onslaughts, as the Wolverine’s full power manifests in borderline gratuity. Logan doesn’t dwell on the violence in a pornographic manner, and the various kills we enjoy are graphic without being prolonged, but it gives us the sense of just how horrific having the Wolverine tear through a bunch of people could actually be. It’s honest to Wolverine’s modus operandii. Mangold gives the action genuine tension, although complaints about the excessive death becoming numbing are certainly not without merit. But it is still a comic book movie, and like any good adult comic book movie, holding back from depicting this kind of thing properly might dilute the impact of the story.

If there’s a weakness to Logan, it’s the fact that in all areas it’s trying to be a stand-alone film in a franchise world. The film plays like it’s one-of-a-kind, and similarly to Mad Max Fury Road it could be watched without the context on which it’s based, but Mangold asks us to hit an emotional high-point through its frenzied finale due largely to the previous one-and-a-half decades of history audiences have with the characters. Simultaneously stand-offish and enveloping of its own history, Logan’s blood-soaked narrative feels very much an adult adventure in a world driven by teenage demographics. Does it work? Hell yes, but for those who aren’t familiar with the X-Men universe, they may flounder at some of the more in-universe moments the film throws out. I suspect in years to come we’ll be discussing Logan in similar tones to Nolan’s The Dark Knight or Donner’s Superman. They’re films that superbly capture the essence of the characters they depict. Logan might lack Superman’s awe-inspiring freedom, or The Dark Knight’s anarchistic malevolence, but it reminds us just how dynamic and compelling the character is – and has always been – throughout both his four-colour and cinematic career. Is this the definitive take on Wolverine? Comic book geeks will forever argue, but as far as the Jackman cinematic version goes, Logan is the best film of its type to-date. It’s just flat-out a great movie, regardless of genre.