There are two types of films in this world. Films that are damn good, maybe even great. And then there are films that are pure cinematic dynamite. Train To Busan is a prime example of the latter: a tour-de-force of zombie cinema that pulverises your senses with hyperkinetic style and delivers knock-out thrills, scares and effects. A terrifying mix of Snowpiercer, 28 Days Later and even World War Z, Train To Busan’s zombie-centric plotting turns the genre on its head with a brave mixture of characters you care about, wide-ranging set-pieces and a sense of apocalyptic desperation not seen on the big screen in years. 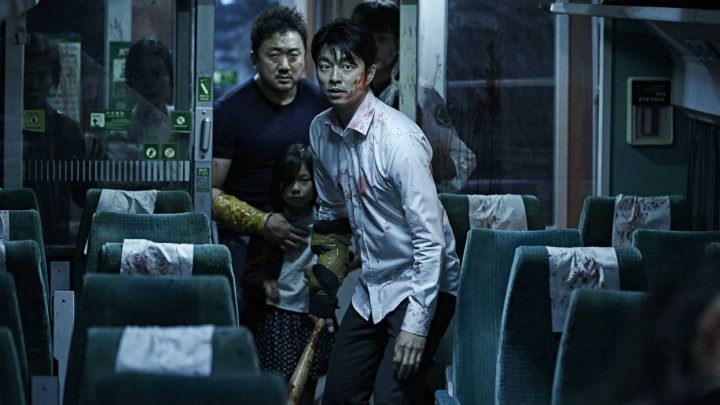 A working father, Seok-wu (Gong Yoo) is taking his daughter, Soo-an (Kim Su-an) to see the girl’s bother in Busan, on the other side of Korea from their residence in Seoul. As they board the departing train, it commences its journey, just making of off the platform before a swarm of zombies approach. The country is being overrun, and television broadcasts make it clear the authorities have no answer. As the train hurtles along, the situation becomes more dire when an infected passenger turns into another zombie, and the train soon becomes a rolling cage of death. Seok-wu, together with several other passengers – father-to-be Sang-wa (Ma Dong-seok), his heavily pregnant wife Seong-kyeong (Jung Yu-mi), and baseball teammate Yon-suk (Kim Eui-sung) – fight their way through the train and hordes of infected people to relative safety, hopefully with the train making it to Busan and possible rescue.

In my entire film-watching life, only three films have astonished me on first watch so astoundingly that I can’t believe more people haven’t seen it. Films like The Boondock Saints, Scottish masterpiece The Acid House, and Kurt Wimmer’s Equilibrium being the three in this exclusive list – films that defy immediate description and simply assault the senses with style, action, characters or simple visual power. These three films would be desert-island recommendations in a heartbeat, particularly for those new to cinema or those seeking the pleasure of just watching a film simply for its own sake. Friends, I’m here to tell you: Train To Busan has been added to that list. 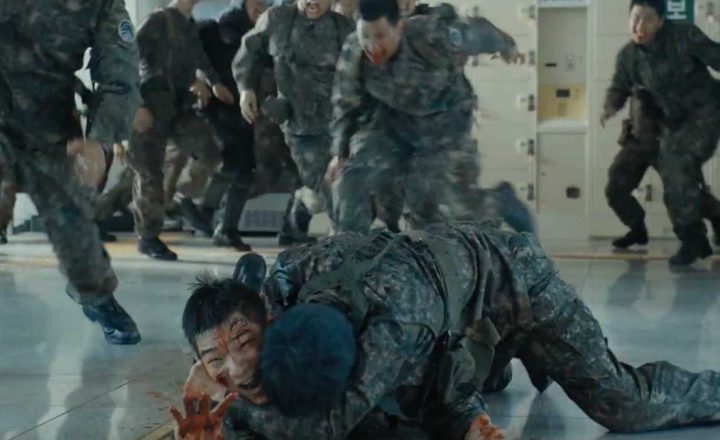 I’m admittedly not a huge watcher of Asian cinema; as much as I’d love to have time to watch more, I simply do not, and so must pick and choose those I do approach with a level of caution, for I often find cinema of the orient difficult to “get into” due largely to social differences. It’s not to say Korean cinema, of which Train To Busan is a superlative example, isn’t worthy of your time, rather it’s an indicator that as a working father and husband, finding time to squeeze in what you might call “alternative films” is pretty difficult in our household. Having said that, I’m glad I paid attention to my friends’ recommendations of this movie, for it is simply a sublime piece of genre film-making that it overcomes many of its potential flaws or pitfalls and executes its premise with skill, precision, and a high degree of panache.

In recent times, especially post-Y2K, the zombie genre has had it’s fair sense of oversaturation; Danny Boyle’s immensely successful 28 Days Later saw the resurgence of a formerly B-grade cinematic medium turn into a powerhouse of blockbuster staples year-in, year-out. It prompted the arrival of shows like The Walking Dead, films such as Warm Bodies and World War Z, and created a new breed of tropes (the swarming zombies, particularly) that have deadened casual fans to the premise’s effect. Train To Busan cannily avoids repeating the mistakes of it’s big-budget brethren, going for the jugular with a thrilling, character-driven story of sheer survival, removing much of the angst and hormonal grist that comes with modern storytelling. Yes, Train To Busan sports a number of the genre’s more defining tropes, including the aforementioned swarming fast zombies, as well as typically insular human behaviour.

Regulation archetypes abound – the teenage couple, the pregnant wife and her husband, the father and his kid, the selfish businessman, the honourable official, and of course the countless white-eyed zombie hordes – and you’d think a film so filled with them might buckle beneath the weight of expectation. Train To Busan does not. Instead, it uses these tropes, inserts them into the story in a manner that makes it compelling – sure, it’s a B-grade zombie flick but why can’t it at least be compelling? – and elevates the film above many of its contemporaries. The film touches on social decay, family, sacrifice, and obviously survival, and produces performances that absolutely wrench your heart out; young Kim Su-an, as Seok-wu’s young daughter, had me tearing up at times. Emotional? Yes, and as a father myself perhaps I’m biased towards empathy in that regard. Still, very few zombie movies manage to produce such absolute scenes as this one does. 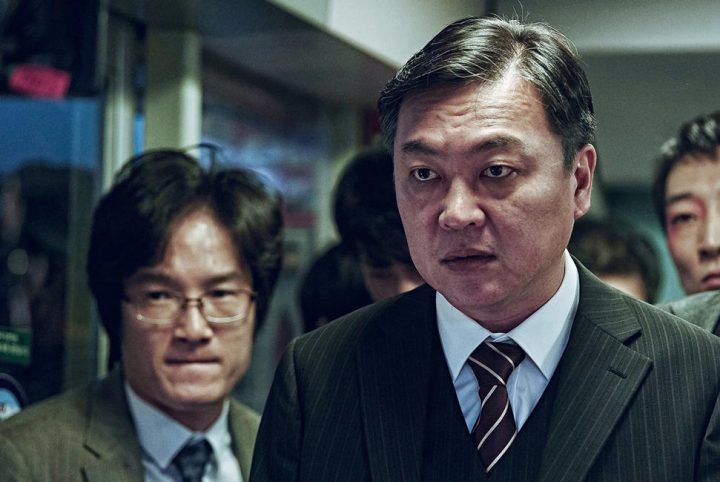 While I know little about the cast and crew behind this opus, it’s fair to say they’ve landed a hugely successful creative endeavour with the aplomb of seasoned veterans. Director Teon Sang-ho, who in his native Korea is better known for his adult-oriented animated films, helms this film with a surety and dexterity that simply astonished me. His camera is a dervish, scampering between characters and locations within the plot with vivaciousness and credible skill, and his ability to build tension from such a simple set-up is terrific to see. It helps to have a great score, and the one provided by Jang Young-gyu is indeed appropriately pulsating and suited to the frantic, sweaty nature of the story. It’s a pounding, death-punctuated film and Young-gyu’s synth-infused orchestrations reminded me (obliquely) of old Doctor Who episodes, before exploding into bass-heavy EDM-inflected rhythms. Suffice to say, the film’s sense of pace is hugely influenced by the music.

Train To Busan is elemental cinema at its finest. It’s short on answers (the reason for the zombie outbreak is hinted at but never specifically seen, unless the subtitles on my copy were erroneous) and delights in stretching its train-bound action to the absolute limit. It wastes no time explaining what zombies are, how they operate, or how you kill them – it assumes this is something the audience will already know – and as such, gets right into the action. Visceral, thrilling, hugely entertaining genre films don’t arrive too often, and when they do you really need to make the most of them. Train To Busan deserves your attention, immediately, and without delay. It’s a ripper!