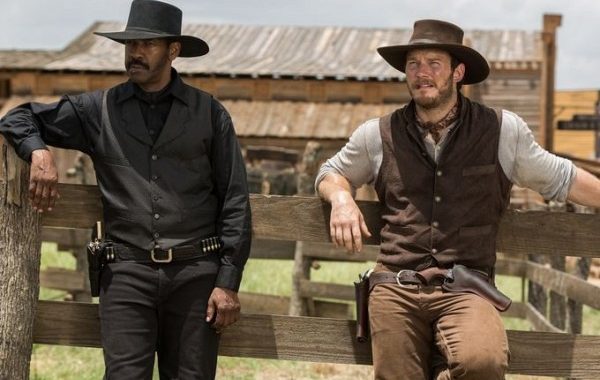 It’s fair to say the run of 2016 remakes has largely been disappointing. From Point Break to Ben-Hur, studio-mandated plundering of cultural cinematic icons has been the kind of luckless, joyless venture film fans have long decided ain’t worth their time. This antipathy towards remakes left me pleasantly surprised by just how much I enjoyed The Magnificent Seven, an updated version of the 1960 version of the same name (which itself was a remake of a Kurosawa classic, Seven Samurai), and although it suffers from many of the same maladies afflicting modern remakes generally these days, the inclusion of Denzel Washington, who makes anything worth a look, and Chris Pratt sporting a nice Eastwood-ian glower, provides this Antoine Fuqua-helmed adventure film with enough slick laughs and ragged cowboy antics to make this world-weary genre fan sit up and take notice.

Plot synopsis courtesy Wikipedia: In 1879, corrupt industrialist Bartholomew Bogue (Peter Sarsgaard) besieges the mining town of Rose Creek, and slaughters a group of locals led by Matthew Cullen (Matt Bomer) when they attempt to stand up to him. Matthew’s wife, Emma Cullen (Haley Bennett), and her friend, Teddy Q (Luke Grimes), ride to the nearest town in search of someone who can help them and come upon warrant officer Sam Chisholm (Denzel Washington), who initially declines their proposal until he learns of Bogue’s involvement. Chisholm sets out to recruit a group of gunslingers who can help him, starting with gambler Josh Faraday (Chris Pratt). They are later joined by sharpshooter Goodnight Robicheaux (Ethan Hawke), knife-wielding Billy Rocks (Lee Byung-hun), skilled tracker Jack Horne (Vincent D’Onofrio), Comanche warrior Red Harvest (Martin Sensmeier) and notorious Mexican outlaw Vasquez (Manuel Garcia-Rulfo).

It’s hard to truly understand just how influential a filmmaker Japanese director Akira Kurosawa really was unless you’re a film fanatic, but for casual fans looking to discover latent plot points or character types based on the man’s achievement with Seven Samurai, one need only look at the Western genre since 1959 to have a vague clue. Kurosawa’s 1954 film was remade in 1960 and released as The Magnificent Seven, starring Yul Brynner, Steve McQueen, James Coburn and Eli Wallach, among others, and in the years since by other filmmakers – predominantly Clint Eastwood, to my mind – Kurosawa’s legacy looms large over the genre as a whole.

Watching this remake, ably directed by Antoine Fuqua (The Replacement Killers, Shooter, The Equalizer and Southpaw), one can see where Eastwood’s Unforgiven drew much inspiration, and of course his films High Plains Drifter and Pale Rider (as well as, if you squint, Two Mules For Sister Sara) are basic B-movie rip-offs of Kurosawa’s archetypal story. The idea of a man, or in this case a group of men, fighting against a bullyboy enemy in the Wild West, reflecting vengeance or personifying justice where there was formerly none, is elemental in its universality. Wiley ol’ screen fox Denzel Washington essays the softly spoken, resolute Sam Chisholm, accompanied by Chris Pratt’s eminently jokster-ish Faraday, as unlikely a pairing as Washington and Mark Wahlberg in 2 Guns, while watching Vincent D’Onofrio affect a high-pitched-voice frontiersman is worth the price of admission alone. Peter Sarsgaard has an absolute blast playing the film’s villain, as oily and snakelike and machiavellian as any Western bad-guy to come before him.

Of course much of the film hinges a lot on the rapport of the titular seven, and although too many of them have too little to do – Manuel Garcia-Rulfo’s Mexican vagabond is chiefly ill-serviced, while Martin Sensmeier’s Comanche warrior is stoically all-action-few-words – there’s plenty of byplay at work here that will elicit a smile from the viewer. Washington’s relationship with Sarsgaard’s Bogue is tepidly constructed initially, giving way to a potentially powerful resolution by film’s end, only it sorta comes from nowhere a bit. Haley Bennett’s vengeful Emma Cullen, who steps right out of the feminist handbook, is a delight, if underwritten, and is used primarily for the story to get the “band back together” so to speak; Bennett is beautiful and gives Emma a strong will and sense of righteousness, but it feels a tad generic considering the trope has been used many, many times before.

Easily my favourite character is Ethan Hawke’s PTSD-afflicted Goodnight, who tremors at having to shoot a weapon again but inevitably becomes something of a saviour – or at least a vital cog in the gang’s plans – and his relationship with associate Billy Rocks. While never explicitly stated, I think the film alludes to both Goodnight and Billy being more than just killers-for-hire brothers, they’re weird life-partners (if you will). It’s an interesting duo dynamic that works (even if I’m wrong) and it’s great to see Hawke playing up the role with a snarl and a roar. 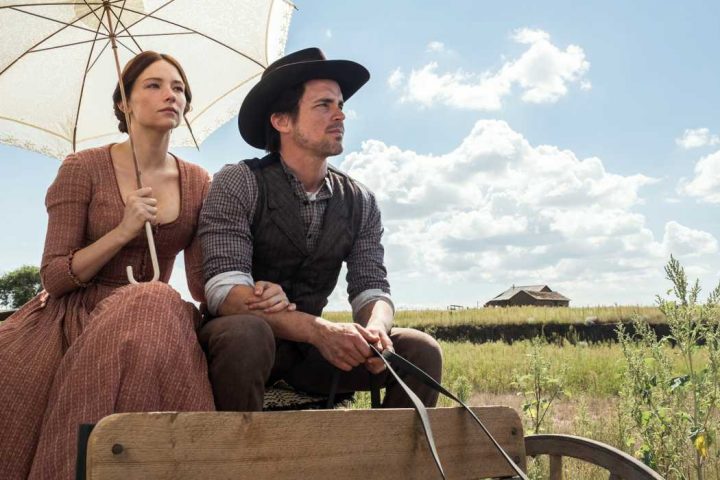 The assemblage of talent before and behind the camera is remarkable, although never an assurance of quality (see the aforementioned Ben-Hur), but here it seems to work. Fuqua’s handling of the widescreen story is top-tier, giving the film a slick, dusty veneer or reality despite the obvious sheen of Hollywood blockbusterism pervading the screen. Musky orange twilight hues and saturated skintones elicit the feeling of Michael Bay-esque escapism, and to a degree Fuqua delivers exactly that, replete with explosions and gattling-gun-riven destruction. There’s a muscularity at play here, hardly surprising considering how big a sausage-fest this film is. The late James Horner, backed by friend Simon Franglen, recieve co-composer credits on the film, as Horner had written some elements of the score prior to his premature passing. The use of Elmer Bernstein’s iconic theme is reserved for the film’s conclusion (which isn’t a spoiler, because you don’t notice it being absent), and when it arrives, there’s emotion behind it.

If there’s a downside to The Magnificent Seven’s 2016 edition, it’s predictability. As a fan of cinema (and as a fan of the original film) it’s easy to spot where this film is going to go; one might argue a lack of creative ingenuity is disappointing, but had Fuqua and Co gone too far off script could you have called it The Magnificent Seven? Having said that, the film does spread itself a tad thin at times, particularly in the film’s spectacular, lengthy but entirely cookie-cutter finale reel of destruction. It’s handsome enough to watch, but you never get the sense of “anything could happen” tension and that’s where things don’t quite work. In spite of this feeling of vanilla storytelling, the film is pleasantly enjoyable and remarkably diverting, drawing strength from the performances and elevating a pedestrian screenplay into something quite inviting.

The Magnificent Seven is a far cry from it’s 50’s origins, and lacks the iconic sensibility and innate classiness of John Sturges’ staid directorial precision. Yet it’s still hugely enjoyable, a blast of B-movie Western cliche and archetypes all working in perfect synchronisation, thanks to Washington’s solid performance, Pratt’s enthusiastic depiction of cavalier knockabout fun, and the generally odious villainy Sarsgaard imbues his prickly Bogue. While it may not linger long after watching, it’s a diverting, fun way to blow a few hours of your time and for that, it’s hard to knock.