There’s few aviation incidents so widely reported on the news that are met with near universal praise and admiration as the dramatic 2009 “Miracle On The Hudson”. Ask anyone alive at the time, and almost without reservation they’d proclaim US Airways pilot Chesley “Sully” Sullenberger as an out-and-out hero. Not only did he keep his cool following a bird strike on his plane almost immediately following takeoff from New York’s LaGuardia Airport, not only did he successfully initiate and execute a water landing on the Hudson River when had limited thrust and manoeuvrability, but he saved the lives of all passengers and crew aboard the craft, returning to the rear of the flooded plane as it sat there in the freezing waters off Manhattan. Clint Eastwood’s Sully isn’t so much a heroic chest-beat to American heroism as it is a solemnised recreation of the events of that day, and the subsequent investigation by the National Transport Safety Bureau. 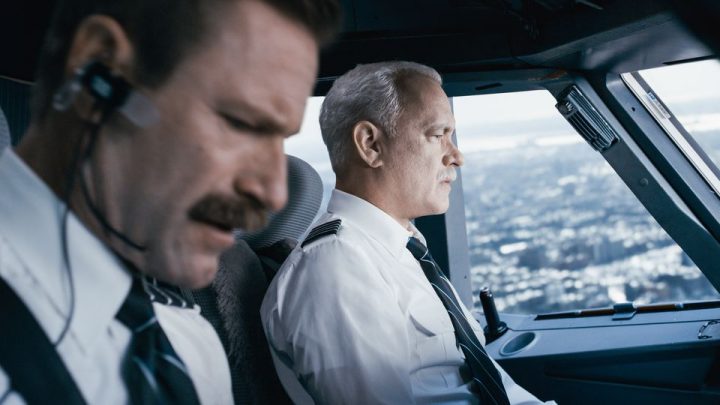 Captain Sullenberger (Hanks) and his co-pilot Jeff Skiles (Aaron Eckhart) are forced into the unthinkable when, soon after takeoff, their passenger jet containing 155 souls is struck by geese, rendering both engines inoperable. With no safe place to land, and the boroughs of New York City surrounding them, Sully does the only thing he can – he puts the plane down on the nearest body of water, the Hudson River between Manhattan and New Jersey. The aircraft does not break up, remaining intact and allowing the passengers and crew to escape, most with minor injuries, to be rescued by rapidly arriving watercraft and helicopters. In the subsequent investigation, the NTSB tries to angle to have the incident recorded as pilot error, showing that Sully could have landed the stricken plane at either La Guardia or Jersey’s Teterborough airports. However, Sully disputes this, backed up by his union representatives, Skiles, and the people of a city who hail him a hero.

Directed by Clint Eastwood, Sully has a sense of restraint about it that prevents it from achieving greatness. This isn’t to say Sully isn’t a very good film, because it is, it’s just not as amazing as it might have been otherwise. Eastwood’s directorial style lends itself to character-driven pieces far moreso than combative action elements, and Sully is by very definition the study of characters under pressure, so you’d expect strong performances by all here, particularly Hanks. Indeed, Eastwood draws from Hanks a moving, albeit patchwork Sullenberger we come to appreciate even if he’s difficult to love. Hanks keeps the man feeling distant, detached almost despite continued sidebar sequences in which he calls his wife Lorraine (a generically stoic Laura Linney) on the other side of the country, and although populated by a bizarre nightmare scenario where Sully’s plane crashes into the Manhattan skyline a la September 11, there’s little grist to the man’s depth as an on-screen persona.

The film largely recounts the events of January 15, 2009 in detail, often repeating moments from alternate viewpoints (such as the ferry operators who were first responders to the downed aircraft) and showcasing brief arcs for tangential characters involved in the story. There’s a documentary flavour to Sully that misfires a little, almost as if Eastwood is trying to capture the essence of heroism in the flight crew but also the patriotism of American ingenuity, despite the inherent antagonism of the investigating NTSB team. Counterbalancing Eastwood’s on-point recreation of events aboard Flight 1549 as it ditched into the Hudson, he gallantly tries to give the NSTB board a sense of villainy, and although perhaps pertinent to human nature it kinda feels belaboured within the relatively lightweight tone of the rest of the movie.

Sully also lacks considerable dramatic heft because if its immediacy as a real-world event. There’s very few people able to watch this film today who wouldn’t have heard of this story, and due to the outcome being widely known, you lose a lot of the tension within each scene. Still, Hanks and Eckhart, together with the swarm of bit-players involved, do their best to elevate the film and for the most part it all works wonderfully – sidebar: a supporting character aboard the plane, a mother and her infant child, are blessedly rendered with an actual baby this time, as opposed to American Sniper’s infamous digital baby controversy – and the reenactment of the crash, the relative calm of escaping passengers and the resulting riverside rescue operation are all faithful to the actual event. As with the majority of his recent films, Eastwood eschews histrionics for reserved, calm, focused storytelling, allowing the characters and plot to drive the story forward rather than embellished heroics or worshipful idolisation of the subject. Had Michael Bay directed this film no doubt he’d have levelled half of New York City just to slake juvenile audience bloodlust.

Sully is a film that rewards viewers with a solid depiction of one of modern aviation’s most astonishing miracles. There’s few surprises aboard this flight, few cliches that aren’t at least touched upon, but it remains a compelling look into the aftermath of the event that captured the world and transformed an unassuming airline pilot into a post-millennial symbol of heroism. Although the man himself has rebutted such acclamation – he handled perfectly a situation he’d trained for and prepared for his entire career – there’s few people alive who wouldn’t want to shake Sully’s hand and buy him a drink out of respect.