Disney’s run of luck turning its animated canon into live-action blockbusters continues with Pete’s Dragon, a slick Hollywood update of the studio’s 1977 film of the same name. As you’d expect, this visual-effects heavy film features a stunning representation in the dragon department, a fluffy green puppy-dog creature brought to life by pixels and the vocal magic of John Kassir, a long-time Disney voice-over artist known for his supporting work in Pocahontas, among other films. The film also features a kid-centric storyline led by the young Oakes Fegley, whose work as Pete stands alongside that of young Neel Sethi in Disney’s other massive success of 2016, The Jungle Book. However, and this is a big however, I’m inclined to suggest that Pete’s Dragon contains themes and scenes that may not be suitable for kids, particularly the young ones, so my review of this film comes with a specific spoiler caveat that’ll allow me to cover off on what parents might have to check out first. Henceforth: Here be spoilers. 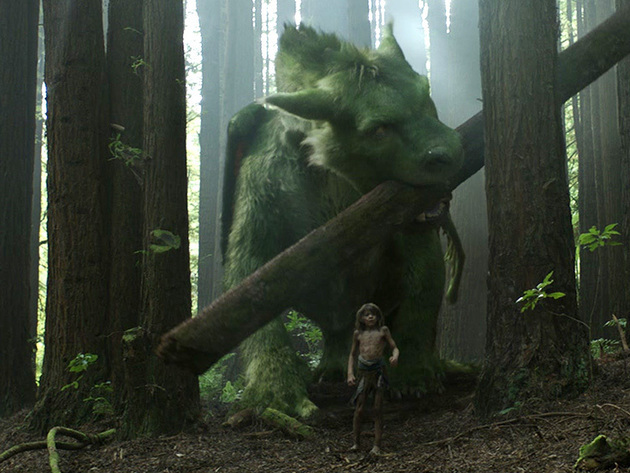 Young Pete is with his parents driving through America’s lumberjack heartland, when they encounter a deer and crash. Pete’s parents are presumed killed, with the young lad finding his way deep into the surrounding forest where he is discovered by an enormous green dragon, that he names Elliot. For six years, Pete and Elliot live a secret life in the forest, before a local forest ranger, Grace Meacham (Bryce Dallas Howard) stumbles upon him when her daughter, Natalie (Oona Laurence – Bad Moms) befriends the young boy whilst exploring. Grace’s boyfriend Jack (Wes Bentley) doesn’t believe Natalie’s story that Pete has a dragon for a friend, but Grace’s brother Gavin (Karl Urban), who works for the local woodcutting company, is suspicious and goes on a hunt to find the supposedly mythical creature. Grace’s father (Robert Redford) claims to have once had an encounter with the dragon, although neither his family nor the townsfolk believe him – until Gavin captures the creature and hauls him through town.

Parents reading this review would be well cautioned to watch Pete’s Dragon before letting their kids give it a go. This is the kind of film that could will traumatise susceptible children, given the film’s decidedly dark, hugely thematic opening scene, in which Pete’s parents are killed in a car wreck, with four-year-old Pete himself surviving all alone. It’s an idyllic moment of love shattered by the most brutal event a child could imagine – the loss of his or her parents, and to be honest it brought a lump to my throat and turned my wife into a blubbering mess. I’d equate it to the moment Atreyu lost Artax to the Swamp Of Sadness, it’s that big a deal. So be warned: the film opens with an incredibly dark, incredibly sad moment, and although the rest of the film is largely fantastic to the point no kid will find it problematic, that opening sets the tone and probably colours the rest of the film so much it never finds the light again. 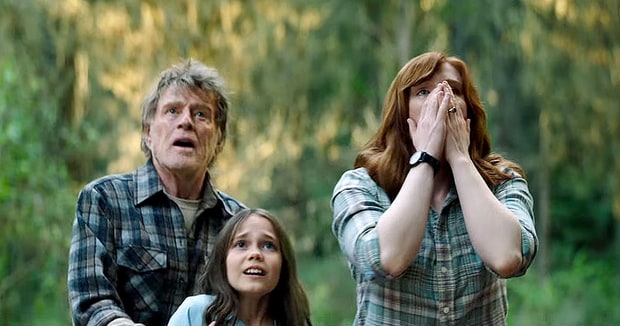 As with most Disney films, there’s a strong element of family within Pete’s Dragon that works well. There’s also an imbalance between the young characters and the adult ones, with Pete grabbing the lion’s share of the film with his dragon (naturally), but leaving Howard, Bentley and Urban to work with limited time in bringing their characters any kind of depth. The dynamic between Wes Bentley and Bruce Dallas Howard’s roles, in which they’re de facto but have a daughter (Natalie), is never really touched on bar minor lines of dialogue, but could confuse some children. Grace’s brother Gavin has what you’d consider a mean-streak but isn’t really the film’s “villain” per se more than he is a catalyst for the final-act chase/escape sequence. Robert Redford’s paternal charisma oozes from his role as the Meacham patriarch, that glint in his eye strong for the film’s childlike exuberance in key moments.

The child actors here are also strong – Oakes Fegley’s Tarzan-like appearance through the film’s first half reminded me a lot of both that film franchise and the aforementioned Jungle Book. His friendship with Elliot is similar to that of a child and a puppy, rather than two equal partners in this venture – my childhood memory of the original ’77 film had me thinking both Pete and Elliot had similar values and weight to their roles, but I could be wrong – and it’s this hang-dog style sense of friendship that works the weaker aspects of my awww-bone. The dynamic between Pete and Elliot is strong enough to bring the film’s climax to a head with conviction and fairy-tale eloquence, but the rest of the relationships within the film aren’t as strong. Oona Laurence’s Natalie is precocious teetering into obnoxious, but beyond being “generic white kid” there’s little to Natalie’s relationships with her mother, father or extended family that aren’t simplistic.

On a technical level, Pete’s Dragon astounds and astonishes with every turn. Key to it is, obviously, the titular dragon, a green-hued furry thing fresh for plush-toy merchandising than a cutting-edge modern dragon. On-screen digital dragons have been solidly represented since Dragonheart, and Pete’s Dragon’s pixels of pleasure do the creature a magnificent service in bringing him to life. The dragon’s fur, his weight within the film frame and his interaction with the live-action elements around him are all spectacularly realised. The film’s cinematography is soft-focused and almost nostalgic, with DP Bojan Baselli (The Sorcerer’s Apprentice, The Lone Ranger) giving the film a familiarly dusk-hued flavour. Daniel Hart’s musical score is certainly in keeping with the film’s fantasy elements, and provides workmanlike tunes that, while affecting, won’t stick in the head.

Obviously, the film wouldn’t be what it is without David Lowery’s direction. Lowery’s directorial debut film, Ain’t Them Bodies Saints, was an eclectic piece owing more to Terence Malick than I was particularly comfortable with (personally, I found the film nigh incomprehensible and I couldn’t finish it) and the lilting, elegiac tones he uses in this film lend themselves more to a poem than a narrative story. If I was to equate it to another film, it would be Spike Jonez’ Where The Wild Things Are, of which this film approaches in both lyricism and aesthetic. There’s a heart behind the camera here, a soulfulness embodied by both Pete and Elliot as a dichotomy of friendship and family; if only the film’s humanity was stronger than its fantastical stuff.

Pete’s Dragon is a warm, inviting piece of fantasy adventure storytelling that comes with a burden of thematic material worthy of parental inspection prior to unleashing it upon the kids. Overall, I enjoyed Pete’s Dragon despite the dark undertones dwelling in its inherently melancholy story of isolation, redemption and familial love. Some might find it tough going, and that’s okay, because this isn’t a film that’s easy to sit back and kick on with. It’s a film of investment: investing your time and intelligence, and a smattering of your emotional state, Pete’s Dragon offers a deeper story than you’d find in most other Disney films, and for that alone it’s worth checking out.