Mel Gibson’s mea culpa to cinema continues with the second of what I’d consider his “grindhouse” film output – Blood Father features a similarly dusty, Mexican-infused aesthetic to that of Mel’s Get The Gringo, which if you’ve not seen you really should because it’s actually pretty good – and my response to this would be to plead with you to give Mel another chance. Despite being a rickety old anti-Semite and a racist, Mel’s still a commanding screen presence and if little else is remarkable about Blood Father’s gritty stylishness, then seeing him chew the scenery and shouty-rant his way through another action flick is worth the price of admission alone. 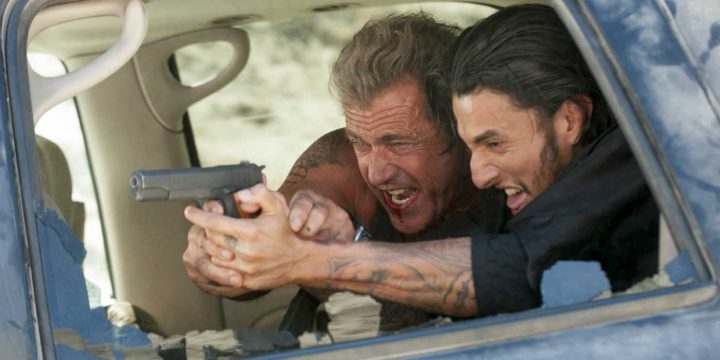 Gibson plays John Link (yeah, I know), a former biker gangster who has spent the last two years out of prison and stone-cold sober. His sponsor, Kirby (William H Macy), lives in the trailer park across the way. Link’s estranged daughter, Lydia (Erin Moriarty) hasn’t seen her father in many years, but comes to him when she gets into trouble with a Mexican drug cartel, members of whom pursue them both to kill her. Using his prison connections Link uncovers who Lydia’s “boyfriend” is and what he wants, and sets about finding a way to bring and end to this dangerous game of cat-and-mouse.

Despite being marketed as a run-and-gun thriller, Blood Father works best when it’s focusing on the relationship between Mel’s John Link and Erin Moriarty’s terrific Lydia. Both are complex parts, but the old father/daughter routine is one Gibson looks like he could play in his sleep; his on-screen chemistry with Moriarty is certainly effortlessly charming, and you can sense a genuine warmth beyond the frustration and anger seething from Gibson’s wide-eyed performance. The film strikes a sweet balance between the action demands and the character demands, which isn’t often the case in modern gunfilms, and it’s pleasant to see.

Directed by Frenchman Jean-Francois Richet, whose last American film was the 2005 Assault On Precinct 13 remake, Blood Father takes us into the New Mexico desert as Link and Lydia scamper across the highways and seedy byways of the US’s southern wild west, pursued by a gamut of tattooed gang members and Lydia’s one-time boyfriend, Jonah (a rancid Diego Luna). Richet’s work on giving the film an effective visual palette pays off, with Gibson’s wild-haired Link fitting right into the husky desert landscape (well, before he shaves it all off mid-film, that is), and Moriarty’s Lydia looking like a delicate blossom well out of place among the hardened lowlifes populating this story. The film is based on a novel (surprising, I wouldn’t have guessed that until I Googled the film’s production) by screenwriter Peter Craig (The Town, The Hunger Games: Mockingjay) and there’s a sense of ragged seat-of-the-pants energy to the story that translates well into the characters. 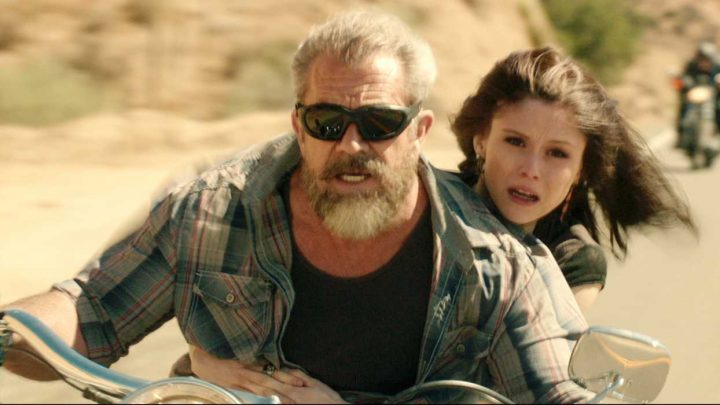 As I mentioned off the top, Gibson basically shouty-breathes and scenery-chews his way through this film, berating and consoling his poor on-screen daughter as she – to quote Link himself – “displays signs of battered wife syndrome”, perhaps as awkward a line of dialogue as Gibson has ever uttered since his public meltdown and equally public marital split in recent years. Gibson takes on the role equated to Liam Neeson in Taken (to the point Gibson even has a scene where he savages a Bad Guy over the phone with the sense of menace only Gibson can muster) only somewhat in reverse: although ostensibly Link is there to protect and save his daughter from those who would pursue them, in terms of character development it’s Link who needs saving by Lydia in many respects. What with his past and his regret and his sorrow at never being there to raise her properly really weighing on his conscience. This byplay isn’t lost on Richet, who gives over appropriate minutes of the film’s startlingly brief sub-90 minute runtime to developing this aspect of the story.

I really enjoyed Blood Father. Competently shot, well acted by both Gibson and Moriarty, with supporting roles to Macy and the extra-creepy Michael Parks (Kill Bill, Red State, Django Unchained) and realistically violent without being gratuitous, Blood Father is an undemanding B-movie that delivers all that’s required of it. It never outstays its welcome, has a handy few moments of thrilling tension, and packs a considerably bigger emotional wallop towards the end than you might expect (relative to the film overall, that is), so with that in mind I offer a solid rating by way of recommendation.