Human survivalist films have made for some terrific cinematic fodder down the years, none moreso than a person forced to match wits with nature when nature is one hungry mofo. To wit: shark films, most recently personified by the idiotic Sharknado franchise, seem to be the pinnacle of the survivalist genre, pitting fleshy human beings against one of natures most finely tuned hunting-and-killing machines. If Jaws reinforced our primal urge to stay out of the water in the 1970’s, and Deep Blue Sea (kinda) tried to do something similar in the 90’s, then The Shallows is the pulsating millennial effort that delivers shock and awe back into underwater terror. 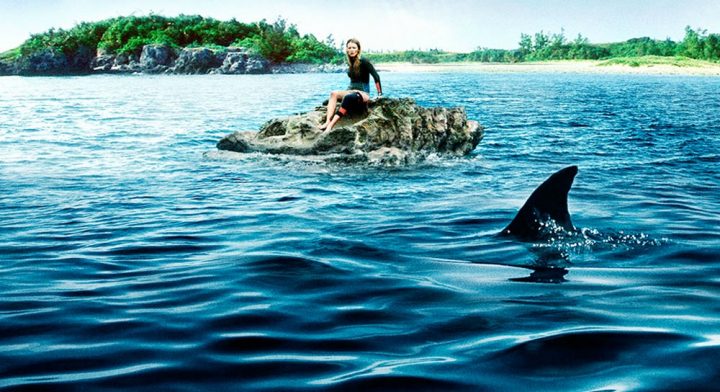 While on a sudden holiday following the death of her mother, Nancy (Blake Lively) goes surfing at a beach visited by decades earlier by the woman she lost, only to find herself attacked in this idyllic paradise by an enormous (are there any other kind) Great White shark. Stranded some 200 yards offshore, bleeding from a wound in her leg, and running out of time before the tide comes in, Nancy must use all her medical-school knowledge to survive against the odds.

Probably best known to today’s audience from his trio of middling Liam Neeson-starring projects, Non-Stop, Unknown and Run All Night, Spanish film director Jaume Collet-Serra delivers what can only be described as his finest film to-date in The Shallows. Having enjoyed his films previously (in spite of them being largely forgettable pulp affairs) I held no expectations as to what this film might deliver, although the inclusion of the always-lovely Lively was an uptick in charisma and performance – the actress’s performance anchored the solid Age of Adaline – but I was left with the same lingering doubt everyone else must have had when first seeing the trailer to this film: would it be another clone of Jaws that underperformed?

Thankfully, The Shallows is really rather excellent. A simple premise executed with skill and precision, not to mention a visual dynamism that heightens the inherent terror of the scenario, and you have a film that will have you literally tearing your fingernails out with tension. As much as Jaws remains the Godfather of shark films, The Shallows is kinda the Michael Bay version (although, blessedly, lacking explosions) and for that, audiences will get a kick out of it. Lively makes a compelling lead, with a crafty backstory that, while thinly written, achieves the necessary emotional connection which draws us further into her plight. With a script by the excellently named Anthony Jaswinski, and a pulsating score by the usually reliable Marco Beltrami, Collet-Serra’s creature-feature is a tour-de-force of nature and humanity coming into sharp focus conflict. The direction on this film is razor sharp, aided primarily by Flavio Labiano’s crisp, incredibly detailed cinematography and Joel Negron’s garrote-wire editing, both of which infuse the film with a sense of immediacy that amps up the thrills tenfold. 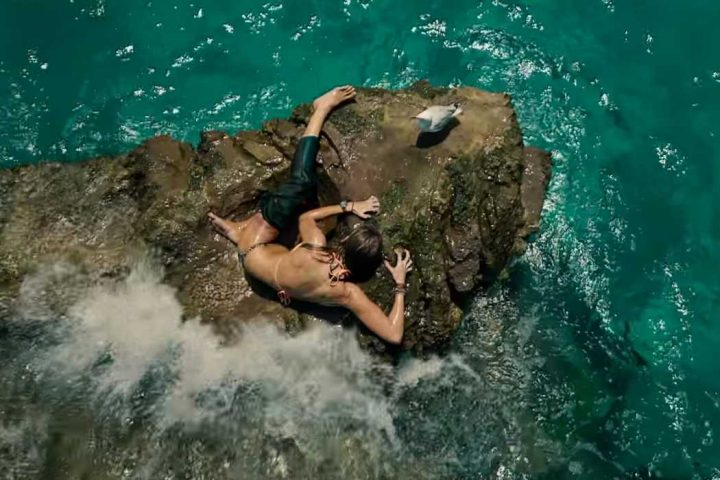 Part of the joy in watching The Shallows is coming from seeing a director use the widescreen palette with such precision and technical virtuosity with such skill and enthusiasm. Collet-Serra’s framing in this film is of the highest calibre, keeping the audience’s eyes darting across the frame, with deep focus, the use of terrific visual cues such as mobile-phone screens and stopwatch faces displaying information without needing to use a cutaway. Again, The Shallows is entirely about immediacy, putting the audience in the front seat of this wild, wild ride, and the brilliant photography and use of the film’s 2.35 frame is telling in what it does, and doesn’t, show. Of course, jump-scares are de rigueur for this kind of film, and The Shallows delivers plenty of those too. Enough to keep this avowed non-ocean-swimmer taut with expectation, anyway.

Those who scare easily will find plenty of fun to be had with The Shallows‘ classy B-movie thunderclaps, while those aching for the glory days of a legitimately scary shark movie will have their appetites whetted by what Collet-Serra serves up. Led by a solid Blake Lively and a thoroughly scary shark, The Shallows is often spine-tinglingly brilliant and an almost always above-average thriller. Strap in, and hang on tight. This film has bite.

4 thoughts on “Movie Review – Shallows, The”