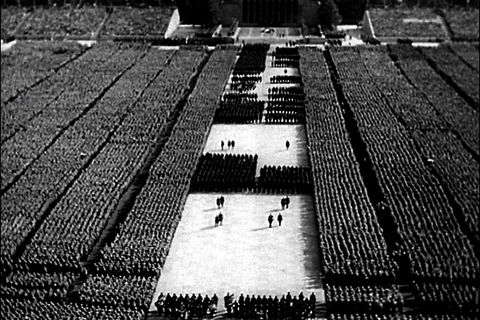 Of all the propaganda films made during or prior to World War II, none have become so synonymous with the political climate in Germany as Leni Riefenstahl’s Triumph Of The Will. Released in 1935 as a grandstanding opus to the rise of German Nationalism following sound defeat in World War I, the film’s historical significance, daring style and (in hindsight) eerie relevance even today cannot be overstated. It’s a film brimming with the stark sense of herd-like mentality at a powerful political figure – Hitler – that resonates with the modern viewer mainly due to the frightening parallels with many modern post-millennial figures in world leadership. Riefenstahl’s cinematography, led by her unfettered access to intimate Nazi circles, is unnerving but enthralling; as a snapshot of a time in world history where evil was rising unchecked, captivated by the charismatic German Reich Chancellor, Triumph Of The Will is compelling, terrifying, hideously beautiful viewing.

Propaganda films are a curious beast. Ostensibly documentary films with bias, propagandists always portray their subject matter in a positive light, to the point it often becomes overbearing. Riefenstahl, whose relationship with Hitler is a matter of some controversy – most agree they were friends, and little else – suffered her brother’s death at the German front in the First World War, before becoming a confident creative force in German culture. A noted dancer, actress, photographer and student of the film medium, Riefenstahl’s work here is sheer artistry, despite the appalling subject matter on display. When appraising a film as confidently heinous as Triumph Of The Will, which sought to give Germany back her sense of national pride in the wake of the country’s “subjugation” by Allied powers at the end of the Great War, one must consider not only the period in which it was made, but the audience it was made for, in this instance the hordes of Nazi sympathisers and supporters urging the Fuhrer onward to what would become Deutschland’s greatest folly. 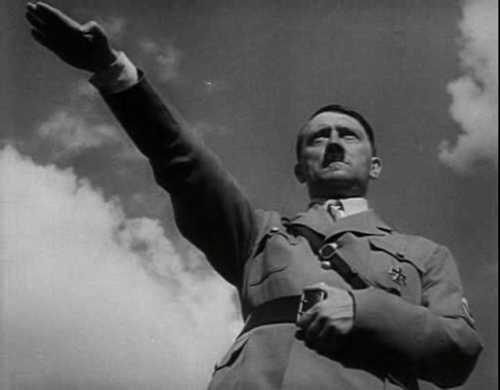 Putting aside the disturbing historical connotations of Triumph’s Nazi themes, the film itself is remarkably insouciant with the truth. Germany, or rather Nuremberg, as the city depicted most often, is portrayed as idyllic, a fairy-tale cobbling of houses, churches (religious persuasion in Germany prior to WWII was Protestant/Roman Catholic) and assembled Nazi troops, all of whom vociferously cry to the Fuhrer as some kind of god-like being: the opening shot of the film has Hitler’s plane descending through the clouds like some Olympian chariot bringing Zeus to Earth, juxtaposing this sentimental picturesque with the fervour of rabid zealotry. The film’s inherent bias begins to show with Hitler’s included speeches, in which little is mentioned about his antisemitism and dedication to cleansing the German race of those who did not fit his Aryan ideal. Instead, the film focuses on national pride: with Germany embarrassed by her enemies at the end of World War I, the people’s persecution complex came into play when Hitler, himself a nationalist zealot, felt the country had paid too heavy a price for her actions in that conflict. So Triumph Of The Will becomes a portrayal of a strong, unified Germany literally begging Hitler to lead them back to becoming a global superpower.

It’s worth noting that propaganda films largely become uninteresting as pure documentary films due to their inherent one-sided focus on singular subjects. Because of their bias, inevitably the film becomes tedious because it wears out its initial impact rather quickly. Following the lengthy introductory montage of Nuremberg parades and scenery, the film becomes an alternating litany of talking heads (featuring various Nazi Party luminaries) and more parades, followed by more salutary talking heads. As a time capsule of history it’s genuinely interesting, but casual viewers will find themselves checking their watches as the same trotted-out platitudes and vociferous proclamations, with minor variation, scream from the mouths of those on the screen. German ranting about stuff isn’t exactly calming viewing even in a non-Nazi setting, but here the rhetoric and socialist barrage becomes diluted by a lack of complexity. 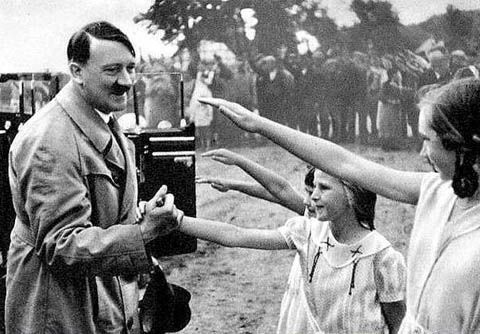 Some critics have claimed Riefenstahl’s editing of the speeches gives the film a lack of clarity around the Nazi Party’s ultimate motives, removing material one might suggest be utterly repugnant to all at the expense of documentary truth. Whether this is accurate or not isn’t for me to say: I know too little about inner Nazi workings to offer up a suggestion on that idea, but as a student of history with an interest in understanding the human condition to follow those we’d rightly claim as outright evil, Triumph Of The Will is aggressively optimistic about Hitler’s ability to do what he says. But it’s propaganda, so one must expect as much. Triumph Of The Will isn’t a purely historical document any more than Lord Of The Rings was a searing human drama. This is a fantasy film of sorts, a bastardising of Hitler’s true ambitions and motivations provoking misplaced national pride instead. If Riefenstahl was complicit in this, or (as she claimed) was unaware of the impending genocide to come, we’ll probably never really know, but as an example of film-making to achieve a specific purpose there’s little doubting Riefenstahl’s manifest destiny was to make Hitler and the German’s look positively reasonable.

There’s no denying the raw power of Triumph’s grand gestures towards its Nazi subjects. As a propaganda piece it does exactly as it should: makes Hitler and the National Socialist Party look awesome, makes Germany look positively peaceful, and features rows upon rows of saluting swastika-wearing acolytes. As a documentary it kinda fails because of overt bias, but in my opinion Riefenstahl never attempts to even hide this element of her film-making, content to heap wonderment and awe upon Hitler and the legions of people at his command. It’s an interesting film, worthy of cinematographic study but little else. At times utterly horrifying, at times magnificently beautiful, Triumph Of The Will is a testament to the power of power and the unfettered hypnotism of nationalism, racism, hatred and rage.