Director :  Ilya Naishuller
Year Of Release :   2016
Principal Cast :  Sharlto Copely, Danila Kozlovsky, Haley Bennett, Tim Roth, Andrei Dementiev.
Approx Running Time :   96 Minutes
Synopsis:   Henry is resurrected from death with no memory, and he must save his wife from a telekinetic warlord with a plan to bio-engineer soldiers.

This hyperbolic action film will find those of queasy disposition avoiding it like the plague: shot entirely in the first-person perspective, Henry’s rock ’em sock ’em aesthetic is not for the faint of heart, or the easily offended. Bloody, extreme, utterly insane; Hardcore Henry offers a similar energetic visceral carnage similar in tone to both Crank and Gamer. Does it succeed as a piece of memorable film? Beyond its graphic violence and stylistic technical prowess, not really, but if an offering of high octane nonsense is what you desire, Hardcore Henry will not only satisfy you, it’ll probably leave you wanting a hell of a lot more. 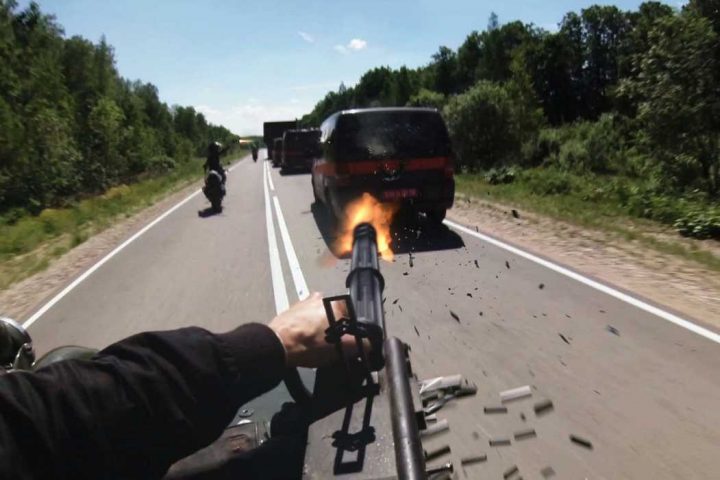 Plot Synopisis courtesy Wikipedia:  Waking up in a tank of water inside a laboratory on an airship, Henry recalls a gang of bullies from his childhood. A scientist, Estelle (Haley Bennett), greets Henry and says she is his wife, and that he has been revived from an accident that left him amnesiac and mute. After replacing a missing arm and leg with hi-tech cybernetic prostheses, a group of mercenaries led by the telekinetic Akan (Danila Kozlovsky) raid the ship, claiming all of Estelle’s research is his corporate property. He kills Estelle’s fellow scientists, before attempting to murder Henry. Henry and Estelle flee in an escape pod and land in a highway in Moscow. Estelle is abducted by the mercenaries shortly after, while Henry is incapacitated and forced into a firefight. He encounters the knowledgeable Jimmy (Sharlto Copely), who is seemingly killed just as he’s about to impart valuable information: leading Henry across Moscow in a desperate attempt to thwart Akan, save Estelle, and stop himself dying.

I imagine this is what Douglas Quaid was expecting when he went to visit Rekall. Essentially a first-person film experience, chock full of visual kinetics and extravagant stupidity, Hardcore Henry is the kind of film that plays better as a video game than it does on a huge screen. Gratifyingly nauseous, I had to watch this on my phone to prevent myself throwing up a week’s worth of food, it’s such a disorienting experience (much like the film’s “plot”, the kind of which is told to the viewer explicitly rather than organically through action or character) so if you’re into that kind of hysterically brutal shoot-em-up gaming stuff then this’ll appeal brilliantly. Me, though? Hardcore Henry is stupefyingly silly in almost every respect save one: the stylish cinematography, the first person narrative style that wears out its welcome surprisingly quickly.

I say surprisingly because I had this pegged as a cool little D-movie that’d deliver an adrenaline shot of fun but never be quite the stayer I hoped. Sadly, Hardcore Henry’s one-joke cleverness becomes frustratingly bereft of tolerable nuance, and the film’s overenthusiastic self-serving silliness crumbles beneath the weight of idiotic plot contrivance. The script (if one might call it that) is written by director Ilya Naishuller, who uses PC-game artifice to further the dramatic tension (although tension is perhaps too strong a word), and if a film was ever to invent convenience for the sake of a plot twist, Hardcore Henry is this millennium’s poster child. Characters don’t act in service of themselves, they act entirely too woodenly in service of whatever action sequence Naishuller can concoct.

This is a film strung between action for the sake of itself; Hardcore Henry isn’t smart enough to try and elevate itself beyond its own technical limitations, and in truth some of the action sequences are hugely entertaining. A sequence involving a tank, a helicopter, and finally a horse had me guffawing with wry laughter, while a tense moment inside a whorehouse delivers the kind of FPS thrills cinema has the potential for. And if you’re into a lot of thumping musical accompaniment to your mindless action films, Naishuller’s nicked the rights to some truly great feet-tapping tunes and grafted them onto his movie.

But the contrived plot and truly awful acting (yeah, even the normally reliable Sharlto Copely does his career a disservice by appearing in this crap) drag this “thrill ride” into something akin to having one’s eyes rubbed over with sandpaper. Breathlessly histrionic and at times extraordinarily bad, Hardcore Henry is the Mountain Dew of fizzy drink cinema. Lacking compelling characters, a plot or even a point, the film succumbs to the limitations of its own peculiar technique even as it’s trying to expand them.