Perhaps apropos, Metropolis, the film about mechanization and the dehumanization of mankind, has been the benefactor of technology allowing us to view this film in its near-entirety, fully restored. For generations, much of Metropolis was considered lost, following removal of key sequences over the years since its release, before a discovery in South America in 2008 led to one of the most comprehensive restoration efforts ever undertaken on a film. A badly damaged but complete version of the film, dubbed into Spanish, was located; restored now to its original German version, and featuring some sublime image processing and restoration, Metropolis has never looked or sounded this good. With a fully re-recorded orchestral treatment of Gottfreid Huppertz’ original score, and a brand new high-definition master (now available on BluRay), revisiting this masterpiece for the first time since my teenage years was a revelation in how good silent cinema could be. 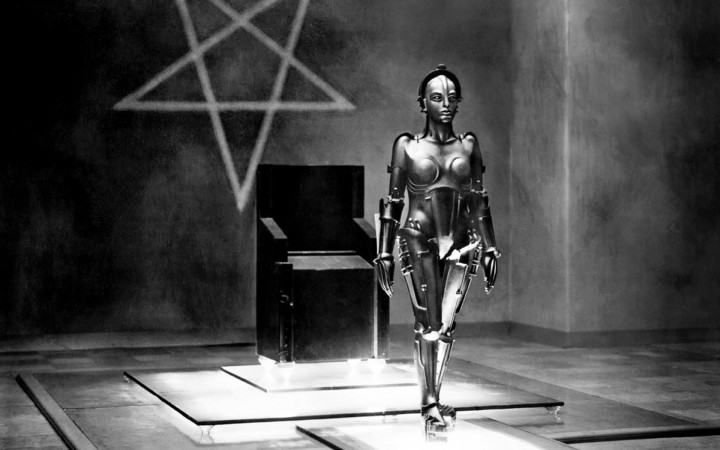 Sprawling, epic, vividly rendered, astonishing: not a single adjective describing Metropolis to the virgin viewer will be enough to personify the opulence and Babylonian truth on display in Fritz Lang’s 1927 masterpiece. I know, it’s easy to bandy about words like “masterpiece” when discussing films, and it’s become a byword for casual critics to elucidate their audiences with meaningless fanciful endearment over a film they’ve enjoyed. But very few films deserve the label, less to today than back in the early 20th Century, when Metropolis was born from the embers of Germany’s defeat in World War I, and through the prism of which Lang personifies the industrialisation and militarisation he saw during that dark period in his country’s history. But Metropolis is a masterpiece; in as near a complete version as we’re ever likely to get, this two and a half hour deliberation on class warfare, social urbanisation and insidious stratification of people by design is one of the most powerful things ever committed to celluloid – and not a word is spoken.

The film tells of two social classes – the basement dwelling working class living in the bowels of a sprawling mega-city, and the high-class citizens living in a virtual utopia in the towers of steel and glass high above. When the son of the city’s master, Freder (Guztav Frohlich) begins to recognise inequity in their society after meeting beautiful low-class Maria (Brigitte Helm), with whom he falls in love. Freder’s father, the master of the city, asks his scientist guru to build a robotic version of Maria to send into the lower depths, ostensibly to sow discord and prevent a potential uprising against his power structure. 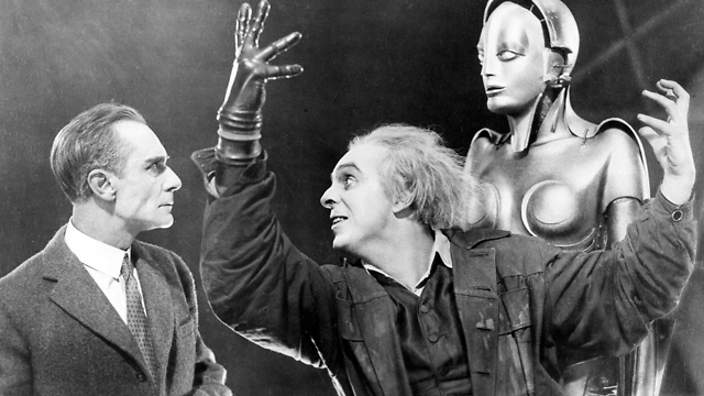 Saturated with subtext, filmed with a keen eye for framing and an operatic sense of style, Metropolis is the kind of film over which many pages could be written on its themes and aspirational ideologies. Far be it for a humble critic such as myself to try deciphering them all, but the film struck me mainly as a diatribe against the corporatization of society, of subjugating people to a life bereft of possibility. As a science fiction film, there’s obviously a lot more at play, insofar as Lang tries to play the role of futurist as well – perhaps he’s not quite so far off the truth, in hindsight – but its hopeful themes and ability to see the human spirit in spite of subjugation are uplifting in the end. Lang supposedly came to think of Metropolis following a visit to New York City, an echo of which he infuses in Metropolis’s amazing architectural designs and sense of mechanised efficiency. The film’s Machine deployment, in which men are confined to work for hours on end at some massive device which powers the entire city, resembles some weird American hybrid aesthetic, as if 1940’s USA was somehow transplanted to 1920’s Germany. It’s a weird thing to see, but somehow it all works: Lang’s vision is strong enough to supplant the film’s autocratic leanings.

The film’s railing against the dehumanization of workers – average folks like you and I – is, for me, the key to Metropolis’ success. With cinema being a medium for all people, even the working class would have looked at this and saw themselves reflected in Lang’s stark cinematography and use of impressionism within the framework. Although the “white saviour from above” motif has been hammered to death in science fiction down the years since, Metropolis’s story of one of the city’s leaders plumbing the depths to see how despairing those working below actually live is still impactful for what Lang accomplishes with his striking set design, editing and use of framing. But you just know there would be those among the film’s audience to whom Metropolis reflected, even in part, on their own lives. Perhaps they’d be angry – perhaps they’d be empowered. 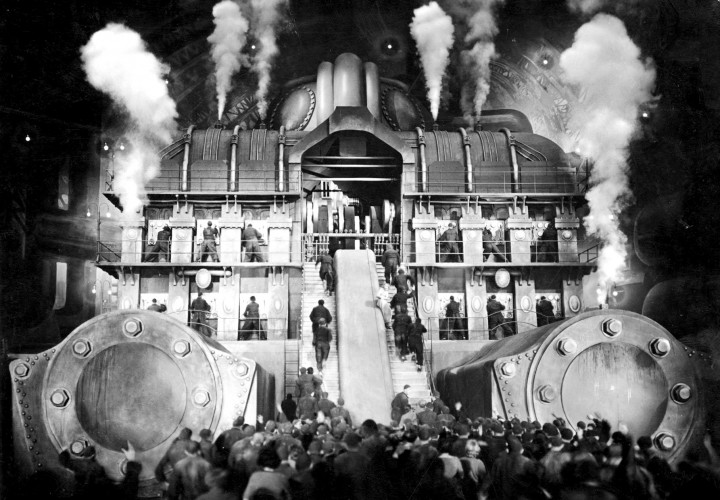 In one of the film’s most startling and memorable moments, Freder’s father, Joh Frederson (Alfred Abel), and (mad) scientist Rotwang (Rudolf Klein-Rogge) unveil a female-gendered robot, whom they convert to look like Maria in order to scupper the real Maria’s plans for a worker uprising, even if it costs Frederson’s own son his life. The effect of the Maria-robot is astonishing considering the time in which the film was made, and one suspects a “no expense spared” mandate by Lang would be to thank here. In fact, the entire film feels like no expense has been spared, from set design to practical and visual effects, Metropolis looks expensive. Never at the expense of story, though, for the film uses its gargantuan set designs, amazing cinematography and remarkable cast to hypnotic effect. Barely a shot in the film isn’t worthy of framing in a gallery; from the grungy, antiseptic bowels of the city to the vaguely Star Trek-ish utopia in the clouds, there’s not an element of this film’s cinematography that doesn’t work wonders on both the cast and the production design.

One of the great problems I had with trying to designate a quality of acting performance on the cast of a silent film is that they had to convey their emotions, and thus the story, purely through their expressions. Because silent film actors couldn’t inflect with their voice, their entire performance had to carry into the lens of the camera and back out to the audience. I have typically (but not always) found silent film acting to be largely overly-theatrical, stagey and unrealistic, less by design but simply the technological limitations of the time, and so my “scores” for acting in these kinds of movies is perhaps skewed more to a modern way of thinking than it ought to be. I found, though, that the performances of the cast in Metropolis to be really good, short of great by the barest of margins. 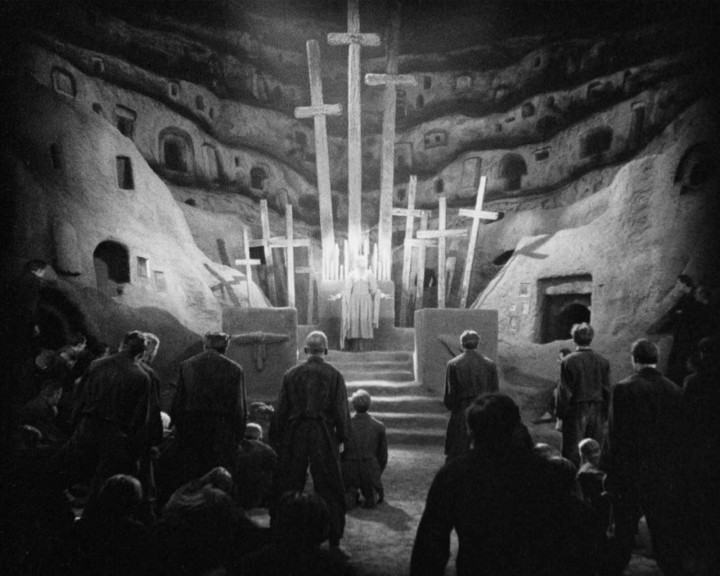 Gustav Frohlich, who made his leading role début in Metropolis, does a masterfully restrained job as the unrestrained Freder, a free-thinking individual who recognises the folly of man’s inhumanity to man, and of the dreams of avarice to which his father has become accustomed. Alfred Abel’s eerie portrayal of Joh Frederson is as villanous as the film gets, although you can understand his motivations in trying to keep his power base intact, even though it’s inevitably futile. The gloriously radiant Brigitte Helm is striking as Maria, in both human and Evil Robot form, with those soulful eyes entrancing anyone who dares look into them too long. Sure, some of the acting (particularly by the multitude of extras) is a little over the top and hammy, but this is more than offset by the magnetic performances of the key leads.

As a film fan, one can only sit back and marvel at the sheer beauty and audacity of Metropolis’ accomplishment. What Lang achieved, through his berating of actors and constant perfectionism on-set, from his stellar design work and multiple motifs threaded throughout the captivating narrative, as well as profoundly haunting and elegiac score and some sublime cinematography (credited to three people: Karl Freund, Gunther Rittau and Walter Ruttmann), is nothing short of revelatory. Metropolis’ impact as a film cannot be overstated, nor can it be adequately summed up by a cinematic paean such as myself – I sometimes wish there was a higher rating than an “A” I could give a film, and this is definitely one of those times. It’s a legitimate film experience, worthy of celebrating and viewing in awestruck wonder. Metropolis is dynamite.