The world’s nightmare political scenario plays out in this nightmare of a film; the sequel to Olympus Has Fallen, a generic yet competent action thriller starring Gerard Butler and Aaron Eckhart, transitions to London, where the majority of the world’s leaders have gathered for the funeral of the recently deceased British Prime Minister, when a massive terrorist attack occurs, wiping out numerous world leaders and more desperately, most of the major landmarks in the capitol. Stuck in the middle are Mike Banning (Butler) and US President Ben Asher (Eckart), who survive numerous close calls while trying desperately to get to safety. London Has Fallen is a contrived, slap-dash action flick lacking gravitas or quality – many major visual effects shots are terrible (which is in keeping with the original film’s jigsaw-piece mentality, I guess) and the action is edited horribly – and while there’s a bare-bones thriller of quality lurking beneath the surface, the end result is a hodge-podge of monumental (heh) proportions. 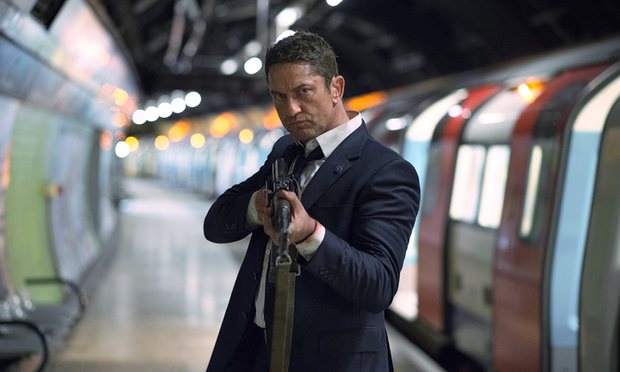 Look, I’m not averse to brainless action flicks, and I’ve seen more than my fair share of films purporting to be “action” that are very slick visual disasters. As creaky as Olympus Has Fallen was, it knew what it wanted to be, did it, and didn’t try and making a silk purse from a sows ear. I’m here to tell you, folks, London Has Fallen is the very definition of a sow’s ear. It has momentary pieces of tension, globules of decent action, but poor Babak Najafi can’t direct on this scale to save his life, and the obviously stretched budget can’t accommodate the widescreen locale and audience expectation with any sense of surety. The plot, while designed as yet another “let’s destroy major world landmarks” exercise in face-slapping tedium, provides a modicum of alacrity although Butler’s bullish characterisation of Banning, who is anxiously expecting his first child to wife Leah (Radha Mitchell, who spends the film looking shocked at a television screen, or actually running while near full-term in a pregnancy, if you can believe it).

Butler’s accent wavers considerably, but as a square-jawed stabby-stabby hero, he makes a good fist of it. The script is inherently dumb as a bucket of rocks, and offers zero believability or logic to back up its wild narrative jumble, but Butler chews the scenery and copious fight sequences as well as any action hero before him, delivering several face-palm comedic lines that are more cumbersome than jovial. He’s backed up by Eckhart as the President, although it has to be said that Eckhart’s ability to carve anything resembling a human character out of his work here is bravely doomed to fail. The rest of the top-line cast are relegated to audience participation only; Morgan Freeman, an utterly wasted Melissa Leo (an Academy Award-winning actress who barely utters a single line in the film!!!!), a nonplussed-looking Jackie Earl Haley and the enormously underrated Colin Salmon spend the vast majority of the film stuck in rooms looking at computer screens, uttering blasè dialogue designed to move the plot along. Not to mention the execrable treatment of one of Olympus’ better characters, Angela Bassett’s Director of The Secret Service, whose character does what the audience probably should do about the same time and just give up on this film altogether twenty minutes in. It’s such a waste. 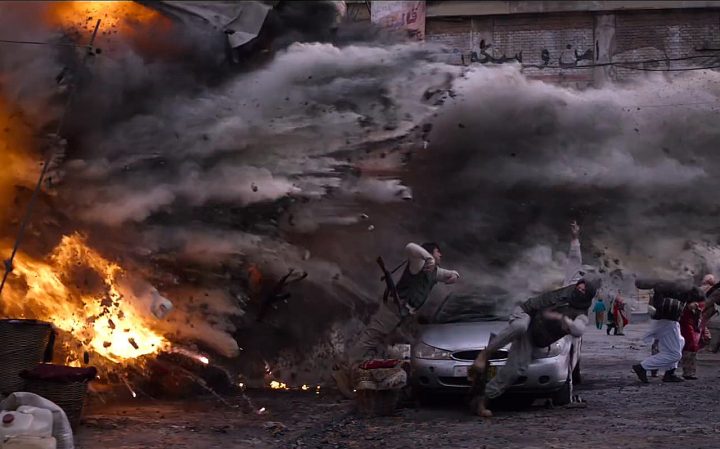 As mentioned, the visual effects in this film range from merely competent to stunningly awful, to the point I’m surprised a major studio would consider releasing it like that. Large-scale shots of buildings exploding, helicopters falling from the sky, or car-bombs going off in city streets look fake as a second grade photoshop effort, while many of the film’s second and third-act action sequences occur at night to mask the budgetary limitations. At times the film just looks shoddy, a third-rate production hidden behind some astute box-office stars. It’s this lo-fi aesthetic which continually works against the film, hamstringing it to the point it’s more frustrating than it is entertaining. Hell, it’s hard to even laugh at this thing when it tries so earnestly to take itself so seriously. Babak Najafi, a Swedish-born director making his English-language film début here, lacks the keen eye of Olympus‘ Antoine Fuqua, although he tries hard to make things exciting in spite of his lesser ability. The editing ranges from jarring to pedestrian, with some terrific camera shots hindered by a razor-wire approach to the pulsing, pounding-soundtrack-inspired desire to keep the film flying forward to its own ruin.

London Has Fallen is the most obvious film in the world – the Bad Guys are obvious, the action is obvious, the outcome is so obvious it’s hardly worth keeping it a secret – and aside from some dynamic sound mixing or Butler’s insistently incomprehensible mumbling, there’s very little to recommend it. Idiotic to the extreme and virtually irredeemable as a major piece of cinema, London Has Fallen lacks the fist-pump patriotism of its predecessor, feels somewhat xenophobic, and becomes a tedious, predictable steamroller of genre archetypes. Specifically: Banning spends an early scene hunched over his laptop with a finger on the “send” button of a resignation email. You just know how that turns out at the end. Exactly how you feel after watching it: resignation to a wasted 90 minutes.