Are we there yet?

Look, I’ll be honest: I gave up on this franchise after the first sequel. I had no interest in Mockingjay Part 1 from the outset, and the fact it was such a shitty film made the prospect of having to sit through another two hour gabfest with Jennifer Lawrence’s smug git face looking stern and Donald Sutherland trashing his legacy in the name of popular culture sound like an exercise in pure torture. So we come to Part 2, a ridiculously stretched-to-two-film franchise capper that does nothing other than confirm the long held belief that stretching material in one book out to two (or three, Peter Jackson) films is purely and simply a cash grab, with no creative legitimacy whatsoever. I’m not gonna lie – I have come to detest this Young Adult dystopian cliché and all it stands for, so Mockingjay Part 2 was always pushing shit uphill to get me to like it. 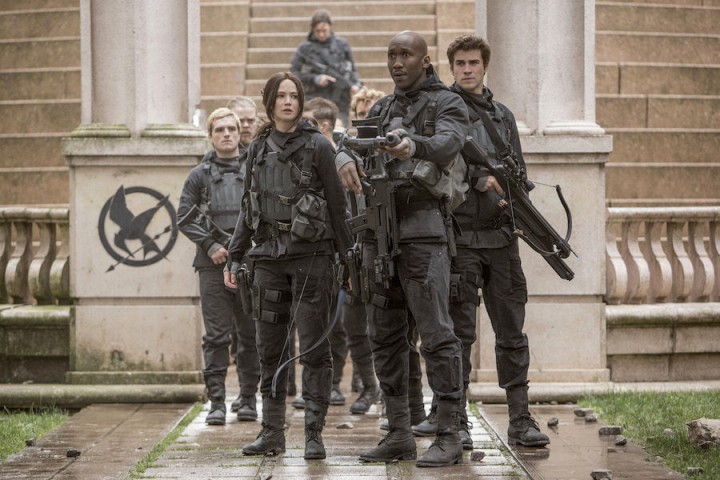 As much as I’ve tried to expunge the rancor of watching Part 1 of this dirge from my memory, Mockingjay Part 2 actually works. Not perfectly, and certainly not enough to deliver a satisfying coup de grace for the previous three films’ worth of narrative torture, but as far as conclusions go this ain’t bad. Although starting off with the same malaise that gripped the entirety of Part 1, Part 2’s action-packed finale is tense, often rousing, and remarkably broad-scale as Katniss and the rebels rise up against Panem, and Donald Sutherland’s odious President Snow. Grand speechifying and confusing gobbledy-gook plotting flatten into a fairly presumptive attack-the-city plot where your favourite characters are either killed, injured, or survive to stand triumphant at the end of it all. Exactly who makes it to the end is the most interesting part of the film, inasmuch as we’ve grown to care for these people and their journey’s end is mostly the reason we’re watching it.

Following the attack on Katniss (Jennifer Lawrence, who simply refuses to smile throughout this entire movie) by Peeta (Josh Hutcherson, who simply refuses to smile throughout this entire movie), Rebel leader President Coin (Julianne Moore, who probably realises her paycheck isn’t worth the career damage the role engenders) and her army begin their insertion into Panem’s Capitol district, in order to remove President Snow (Donald Sutherland, who surely must need dental work considering all the scenery chewing he’s been doing on these movies) from power. Snow has laced the Capitol’s streets with Pods, devices designed to kill an advancing army, particularly an army with Katniss at the head. Katniss’s drive to kill Snow, as well as her reluctance to be a leader to the world’s armies, form the central conflict for Lawrence’s arc within the film, not to mention the drizzling romantic triangle between her and Hemsworth The Lesser and Hutcherson, which sputters and squirts to life but ends up an oozing puddle of iniquity throughout. 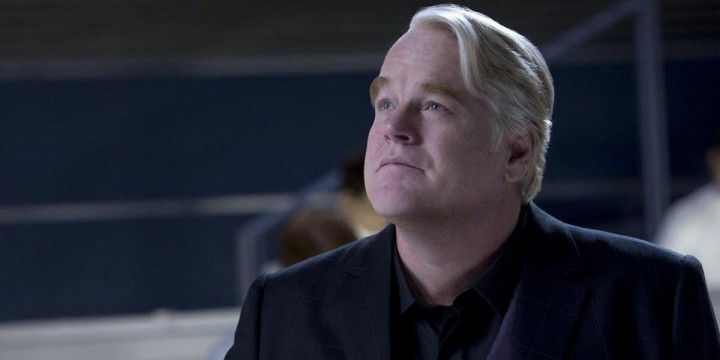 Shot with what appears to be some weird monochrome setting on the camera, in which everything comes out as various shades of grey (not 50, though), Mockingjay’s visual aesthetic has slowly drifted from a vaguely bright tone of the first film to a Saving Private Ryan drabness, a decaying palette as close to paralleling the narrative as any modern film has approached this decade. Melancholy, bleak, resolutely depressive; Part 2’s juxtaposition of ruin and war mixed with the blockbusterism of spectacle and entertainment is one I’ve never acclimated to thus far. Heady in intent, the film’s bleak tones mitigate much beyond hopelessness and destitute action. The action sequences are adequately mounted, and carried off with the flair a mega-budget would allow, but the stakes – ahh, the film’s raison d’etre – never deliver. Either because I can’t get into this franchise or because of my general loathing for Lawrence’s frowny-faced approach to acting, part of me would have been happier to have a 90 minute film in which Katniss got cut down in a hail of bullets and the credits rolled, rather than the two hour slog Part 2 actually is.

As had been problematic for other young adult franchises of late, splitting thin material into multiple films brings with it an inevitable creative vacuum. Paraphrasing Tolkein, Mockingjay’s double-act is the equivalent of scraping too little butter over too much bread. The characters and their arcs aren’t strong enough in these films to sustain the narrative, and what import they intend to impart feels clunky or overcooked. The film features a lot of sitting around watching screens, a lot of speeches and a lot of Katniss angsting about her role in the uprising against Snow. There’s interruptions involving various booby traps and traipsing through ruined city, and the CG work on the film in these areas is brilliantly executed, but at this point it’s become a lot of grey noise against a backdrop of continual despair. It’s a chore to watch, most of the time, a flickering ember of fire that refuses to die but provides no warmth, hopeless in cause and ultimately fruitless in consequence. The motives for this story have become muddled, confused for the sake of cinematic extravagance because so much was removed from the first few films’ worth of story. Where the first Hunger Games was legitimately cogent as an overall story, the further we’ve gone into the franchise the wider the road has become, until we’re standing on a freeway with no chance of an offramp. It’s one thing to smatter a quality cast through even the smallest bit-part characters, it’s another to make us give a shit about them. 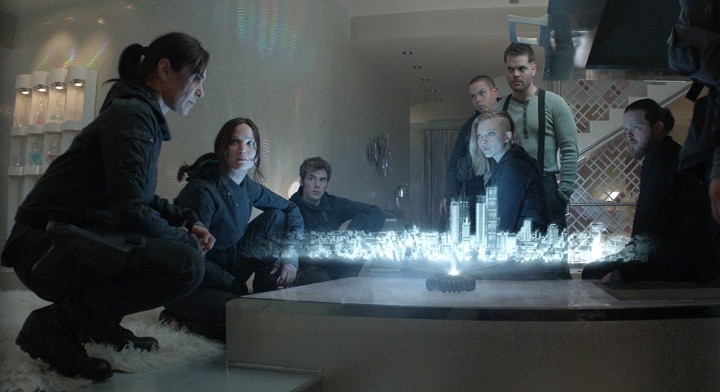 Indeed, the film is populated with a magnificent array of performers, all trying to wring the most they can out of minimal time on screen. Lawrence bears the weight of the franchise like the seasoned pro she’s become, enabled by folks like Julianne Moore, Sutherland, Hemsworth and the late, great Philip Seymour Hoffman providing substance to their parts. Watching Hoffman in what is his final screen appearance is just so sad, because we know a) he was much better than this material and b) if you’re gonna go out, the Hunger Games is the worst possible franchise with which to end on. Josh Hutcherson’s role in Part 2 is to be either a Capitol convert or a struggling ally – Peeta’s brainwashing by Snow is hard to counter for the Rebels, and following the conclusion of Part 1 he’s seen as “the enemy” in sheep’s clothing, but Kantiss (perhaps unwisely) believes there’s still good in him, like some weird Darth Vader motif.

On the whole, though, one gets the sense that the notes from director Frances Lawrence (no relation to Jennifer) to his cast were simply “look sad a lot”, and to their credit the performers all do just that. The film’s smothering bleakness just becomes tedious, a dark, horrifying analogy on war that might work on any other level than what should be a teen-centric blockbuster. As a satisfying way to end four films worth of death and abject misery, there’s worse ways it could have gone, but make no mistake: Part 2 continues and concludes the franchise much like Part 1 began the conclusion. Dark and depressing, and mostly boring until its raucous conclusion, Part 2 offers only scant emotional weight in place of deleterious CG overload and continual last-gasp heroics. Exactly why Katniss is so important to the films, I’m still not sure – she’s as useless a propaganda machine as there ever has been – but had she been killed at the end of the first film it woulda saved us all a lot of trouble.