One of only three films to-date to win the Big Five Academy Awards – Director, Actor, Actress, Screenplay and Film – It Happened One Night is also one of the first films I’ve seen from Frank Capra (yeah, I know, it’s taken me a while). Starring Clarke Cable and Claudette Colbert, who both saw Oscar glory for their performances here (only the former truly deserving it, in my opinion), the film’s screwball comedy tropes take a while to kick in and honestly don’t seem to gel like they ought. The film isn’t bad, in fact it’s really rather plain, but deserving of the Oscar kudos to which its noted for? Hardly. 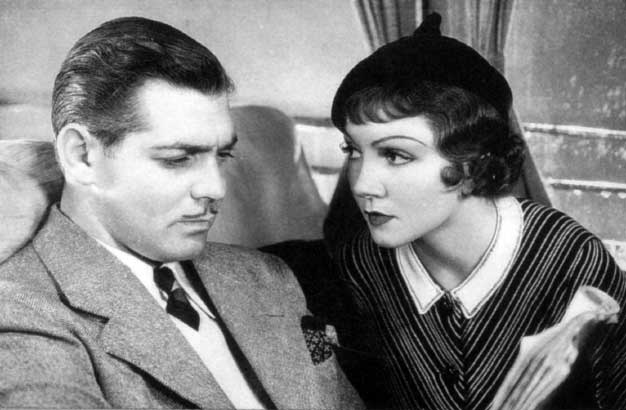 Colbert plays spoiled brat Ellie Andrews, whose wealthy father Alexander (Walter Connolly) kidnaps her after discovering she eloped and married her fiancée “King” Westley (Jameson Thomas), whom Alexander believes is simply after her money. After fleeing her father, Ellie takes the bus across-country, during which she meets recently fired reporter Peter Warne (Cable), with whom she has an antagonistic relationship. Recognising her, Warne decides to follow her along and use her situation as a story to become employed again. As they travel, they encounter a variety of situations over which they bond, forging a friendship – romantic? – that makes them see that perhaps the things they’re running from aren’t as important as they think they are.

Touted as a comedy, I honestly didn’t find that much to laugh at with It Happened One Night. Although Gable’s winning personality does a lot to bring the script to life, a dullard, flat, pedestrian performance by Colbert leaves much of this double-act film lop-sided and… grating. Yeah, grating. Capra’s direction is superb – the cinematography is sublime, and the film’s framing and editing is exquisite – but as a story? As character-driven drama/comedy? It Happened One Night is largely disappointing. With a screenplay by Capra regular Robert Riskin (based on the short story Night Bus, by Samuel Adams), a “fun and fast-paced” story about two disparate souls who use each other to achieve a mutual goal is a chugging, lifeless affair.

The problem I have with these kinds of stories where the two leads are inherently antagonists, before reverting to being the exact opposite, is that the chemistry between the actors needs to really zing off the screen. Sadly, neither Gable nor Colbert seem to have any legitimate attraction towards each other despite their character’s despising the other, although I have to say most of that lands squarely at the feet of Colbert, who seems less interested with the film than a star of her stature. The film is noted for its difficult production, since neither Capra nor the cast thought much of the script, so perhaps it’s little wonder it doesn’t hold up as well as the Academy might believe. Hell, Colbert was on a train about to leave town the night she won the Oscar, and had to be dragged back to the ceremony still dressed for departure, that’s how little she thought of the role. Although Oscar might differ with my opinion, I found little to laugh at, or even enjoy, in Colbert’s brattish character and her performance of it. Plainly, the role is annoying, and nothing the film does can mitigate this.

Gable, meanwhile, is just charming as all hell, as legitimate a screen star as his mythology would impress upon you. He simply steals the film out from under everyone else, delivering his dialogue with a snap and a twinkle in his eye. He almost single-handedly lifts this film from mediocrity; almost. His winning performance is easily the best part of the movie, quick of wit and snappy of patter – little wonder Gable was the pre-eminent movie star of his era. 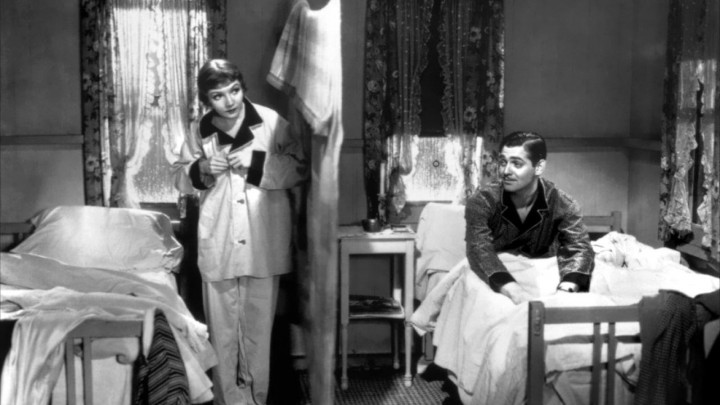 While the story and character did little for me, the overall tone and production value of the film is still eminently captivating. Frank Capra’s sense of pacing, his use of camerawork and the unique framing of his subjects, not to mention the soft-focused cinematography at use here, is just delightful. Lensed by Joseph Walker, It Happened One Night suffers from a bounty of cinematographic superlatives: the black and white style of the film is lensed with a vaseline-tinted softness, lit with noir-ish shadow and glowing reverence for the subjects – this film positively sparkles. Capra’s framing is also wonderful, more often using the 1.33 frame better than many of his contemporaries with now-classic angles, low positioning and a deft manner of editing. Colbert is almost always in ¾ profile, and lit softly, while Gable presents as the archetypal leading man in his upright stature and nonchalance to the camera. Night-time scenes are largely studio-bound, which offers a sense of fantasy to the film, while daylight sequences tend to be either on location and/or well lit, and the film’s genteel placement gives off a somewhat pastoral charm. Generally, It Happened One Night looks and sounds amazing.

I have to admit to a certain amount of disappointment with this film. Considering its star attraction in Clarke Gable, the acclaim of Frank Capra, and the technical clout behind the camera on offer here, It Happened One Night isn’t as funny as it thinks it is, nor is it as compelling a Best Picture winner as I’d have hoped. It’s not a bad film, in the sense that it could have been a lot worse, but it’s no great shakes; lethargic and melancholy to a fault and lacking the laughs and uproarious comedic style it is touted as, the film’s placating aesthetic failed to resonate with me entirely. Undemanding as it is, It Happened One Night is mild fun with simple, thinly written characters, and only Gable offering anything near an Oscar-calibre performance: I’d recommend it only for Capra or Gable fans, and Oscar completists. Otherwise, meh.