Dying in the mud ain’t much fun.

With the advent of modern media’s global proliferation, it’s hard to imagine a time when people only thought of war as something noble happening in far off continents. World War I was considered by many young lads enlisting in the varied armies of the world to be a noble, civilised  affair, heroic and a rite of passage that turned boys into men. Of course, the true horror of war wasn’t realized until those new recruits actually landed on the battlefield, with mud and blood spilling through bombs and bullets that devastated an entire generation of young men. All Quiet On The Western Front is based on the 1929 German novel of the same name by Erich Remarque, and was released in 1930, between the end of WWI in 1918 and barely a decade before Hitler’s do-over. Uniquely told from the German perspective, All Quiet (which was remade in 1979) won both the Best Picture and Best Director (for Lewis Milestone), and has since become one of the great anti-war films of all time.

Plot Synopsis courtesy SparkNotes:  Narrated by Paul Bäumer (Lew Ayres), a young man of nineteen who fights in the German army on the French front in World War I. Paul and several of his friends from school joined the army voluntarily after listening to the stirring patriotic speeches of their teacher, Kantorek (Arnold Lucy). But after experiencing ten weeks of brutal training at the hands of the petty, cruel Corporal Himmelstoss (John Wray) and the unimaginable brutality of life on the front, Paul and his friends have realized that the ideals of nationalism and patriotism for which they enlisted are simply empty clichés. They no longer believe that war is glorious or honourable, and they live in constant physical and emotional terror.

For me, war films changed forever with the 1998 release of Saving Private Ryan, which did for modern audiences what I suspect this film did back in 1930. Although today we know war is one of the worst atrocities people can inflict on one another, the heroism and “gentleman’s affair” in which war was considered in the early 20th Century became a sordid, incomprehensible bogged-down sense of carnage; long gone were the military campaigns of the US Revolutionary War, where lines of men would walk towards each other shooting in a civilised manner until the field of battle was won by one side. World War I was the first industrial wars, using both planes, tanks and mechanised artillery, and the toll wrought on the men fighting it was extreme, both physically and more sombrely, psychologically.

Given the industrialization of war, it became apparent that the conflict also dehumanised people, reducing them to grinder meat for shelling, machine-guns and all manner of newly introduced methods of slaughter. All Quiet on The Western Front depicts in rather graphic detail not only the bloodshed but the raw terror facing the German soldiers through the various trench battles they engage in, not to mention the starvation, disease, vermin and other blights the men faced each and every day on the front. To audiences at the time, this must have seemed a most visceral, brutal movie-going experience – little wonder it won Best Picture – and I’m not averse to admitting that the impact of the film has dimmed only a little. 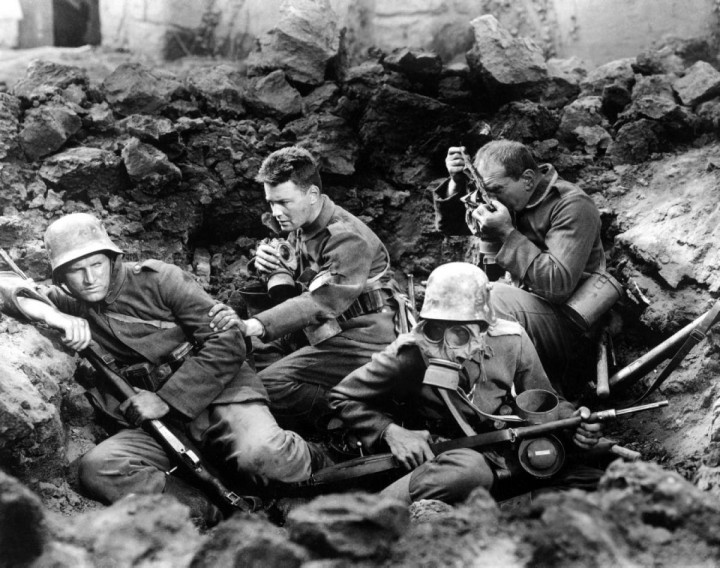 The film’s battle sequences are not only brilliantly executed at a technical level, but are truly epic in scope. Much like Spielberg’s recreation of the landing at Normandy on D-Day, Milestone’s recreation of trench warfare, and men running into the field of battle surrounded by bayonets, bullets and explosion, is superbly realised for a film of this vintage. The brutality of the film pulls no punches, and although not a graphic and gory as modern war films have since become, there’s no less wincing as men drop to the ground dead from any number of combat wounds. It’s not long into the film that our heroes, led by Lew Ayres’ Paul Baumer, soon realise that the noble conflict they signed up for is a clusterf@ck of dirt, mud, rancid food and deprivation.

The reaction to the reality of war is key to the film’s power, perhaps even moreso than the depiction of war itself; Paul and his friends discuss the causes and futility of war at one point, and come to the same conclusion the rest of us do – war is insane, and largely borne from imbeciles hating each other and lusting for power. Given the book was written by a veteran of the war in question, the truth of the soldiers questioning why they’re fighting is incredibly prescient, and in this respect the film has lost none of its power. The only difference for younger viewers will be the war the film is talking about. It’s an entirely fair statement that you could shift this material from World War I to, say the Iraq War and the only thing you’ll be changing is the names of the characters, because the subtext would be almost identical. The film’s continual tormenting assault on the viewer in stripping back the veneer of heroism involved in wartime combat to those who didn’t fight, or were left behind, resounds with associated trauma and psychological haranguing. It’s a devastating film for the impact the war has on those taking part; the glory is cast aside and in its place comes sadness and abject horror.

All Quiet On The Western Front is somewhat anachronistic nowadays due to casting British and American speaking actors in the roles of German characters. A lot like Enemy At The Gates it’s somewhat jarring to hear middle-class American actors drawling phrases like “Franz” and “Schmidt” without a single German inflection; young viewers will probably watch this in utter confusion, but given the proclivity of Hollywood to vaguely whitewash its casting in big-budget films, it’s hardly something folks would be unfamiliar with. American actors playing German soldiers look cumbersomely weird given they wear the Kaiser uniforms, but if you keep in mind the era in which the film was made, the strangeness wears off after a while. 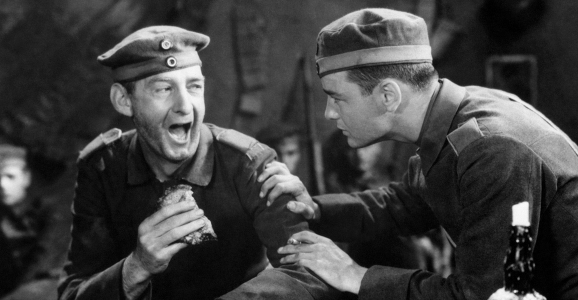 The film is also extremely well acted, particularly by the young ensemble. Lew Ayres’ work is excellent, embodying the idealistic young soldier going off to fight “for the Fatherland”, whose reaction to the bloody conflict as its futility pierces his enthusiasm is indeed affecting. His reaction to returning to the class from which he was recruited, to see his old professor doing the same thing a bunch of younger zealots, is probably the capstone on the entire war’s idiocy: war begets war, begets war and more war. Harrowing, insightfully acted, brutally edited and utterly mesmerising for the way in which is turns boys into men through death, All Quiet On The Western Front may not boast any significant “name” actors but it’s one of the best acted war films ever made.

Although it’s been several generations since the entire world went to war, films such as this one serve to remind us how futile and awful they can be. Serving as a historical lesson, a warning to future generations (which wasn’t heeded, given World War II arrived a few years later, not to mention the countless wars since) and an opus of superior film-making the likes of which I did not expect to resound to brilliantly, All Quiet On The Western Front is essential viewing for any fan of films, for any fan of war films, and for anyone who has ever drawn breath on this Earth.