Seminal Australian comedy, and our first international “blockbuster”, Crocodile Dundee remains the gold standard of what larrakin humour and laid-back, utterly ocker characterisation can achieve. Made for under $10m in 1986, Crocodile Dundee would go on to sweep the globe at the box-office, becoming the second-highest grossing film that year, and still one of the most profitable Aussie films of all time. Following years of local television comedy programming, Paul Hogan, together with long-time producer Paul Faiman, set out to make what they hoped would be Australia’s first mainstream hit, featuring a picture-postcard look at the Outback, a likeable, swarthy-yet-charming leading man, and the classic fish-out-of-water storyline that would allow international audiences an “in” on the plot. Although confident as to their product, there’s no likelihood they could have seen the cultural impact the film would have, not only within Australia, but externally as well, cultivating a love for the land Down Under that has never really abated. 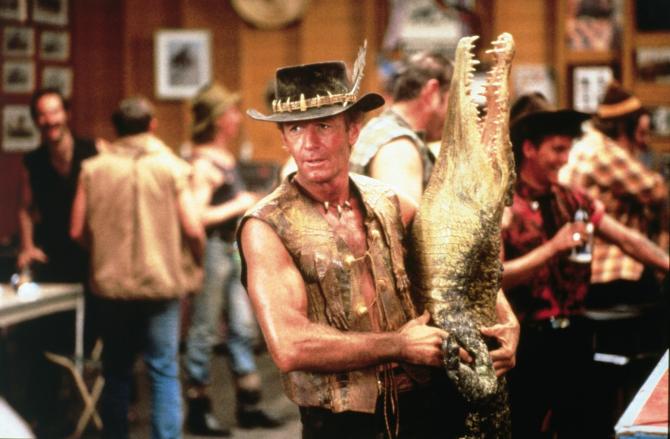 New York newspaper reporter Sue Charlton (Linda Kozlowski) travels to Outback Australia to meet a local living legend, Mick “Crocodile” Dundee (Paul Hogan), who legend has it lost part of a leg before crawling hundreds of miles to safety through the bush. Mick, together with his business partner Wally (John Meillon) take Sue deep into the bush to the spot the attack occurred, encountering all manner of bush personalities and wildlife, from local Aborigines (David Gilpilil) to wild water buffalo. As they pair journey, they become attached, so much so that following Dundee rescuing Sue from a croc attack, she invites him to travel to New York City with her as a follow-up on the story she’s writing. Mick, initially finding life in the big city confusing, eventually becomes something of a local icon, battling not only robbers and muggers but also the city’s traffic and nightlife.

It’s easy to see why American audiences lapped up the charms of Mick Dundee; the film is so filled with Hogan’s affable personality and gift of comedy, matched only by the majesty of the Northern territory locations depicted in the film, it’s simply wonderful. Whereas most people usually only associated Australia with Ned Kelly, bushrangers, and our colonial penal colony past, Crocodile Dundee gave birth to the idea (overseas, at least) of a mythological outback bushman, somebody who lived off the land, drank and played hard, but lived a moral and largely naturalistic lifestyle. It was a captivating idea, I guess, and Hogan’s likeable screen persona translated into megabucks for the film, as well as untold dollars for the Aussie tourism industry, which saw a huge spike of travellers seeking our fair shores in search of their own Mick Dundee. 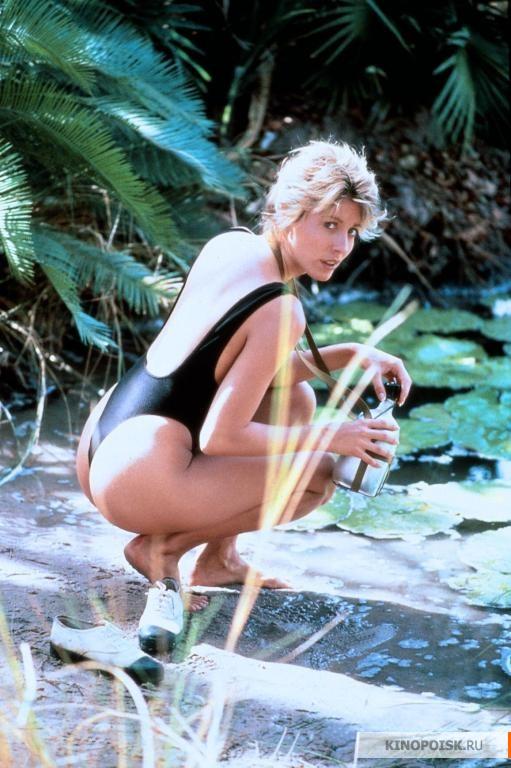 Dundee became our first international movie star, well before the Malcolm Douglas’s and Steve Irwin’s ever could/did, so naturally our local Tall Poppy syndrome sought to undercut Hogan’s achievement by being somewhat embarrassed at the portrayal of our culture as somewhat backwards or “redneck”. They needn’t have bothered: the film’s appeal remains intact due largely to a genteel comedic style and a distinct lack of spite or antagonism. Even the film’s central “villain”, such as he is, remains out of the picture for a vast swathe of the running time, returning late in the film less as an antagonist to Mick as a rival love-interest for Sue. Aside from one truly grab-asstic moment of suspense, when Sue is attacked by a lunging crocodile, the film is actually surprisingly sedate, perhaps in keeping with its central character’s overall lifestyle choice.

Instead, Hogan and Faiman derive much of their comedy from the dual fish-out-of-water motifs – Sue in the outback, then Mick in New York – and it almost always works superbly well. The population of Walkabout Creek which opens the film’s Outback setting are your typically clichéd bush types, always drunk, fighting, or drunk and fighting, but always ready with a smile and a handshake. Mick’s cavalier nature towards dragging Sue into the bush, miles from “civilisation” is intentionally played up; at one point he sneakily looks at Wally’s watch, before looking up at the sun and revealing the time to convince Sue he knows what he’s doing, and this mild, disarming sense of humour transcends cultural boundaries enough to succeed even though it’s a bit of an eye-roller.

It’s when we see Mick enter New York City that the film’s pace picks up, even though much of the plotting is haphazard at best. Mick attends soirées and parties with Sue, mingles with barflys and prostitutes, stops a couple of robberies (one involving a can of beans, another involving that infamous line about a knife which has since entered pop-culture vernacular) and even befriends a local “blackfella” limousine driver – a pre-Die Hard Reginald VelJohnson. Although the film does dwell a little too long on this aspect of the story (such as it is), and some scenes do stretch on a fraction too long here and there, you never get the sense that anyone’s in a hurry to conclude this little jaunt, as Mick and Sue connect through mutual understanding that neither is comfortable in the others’ natural environment; a classic opposite’s attract scenario. 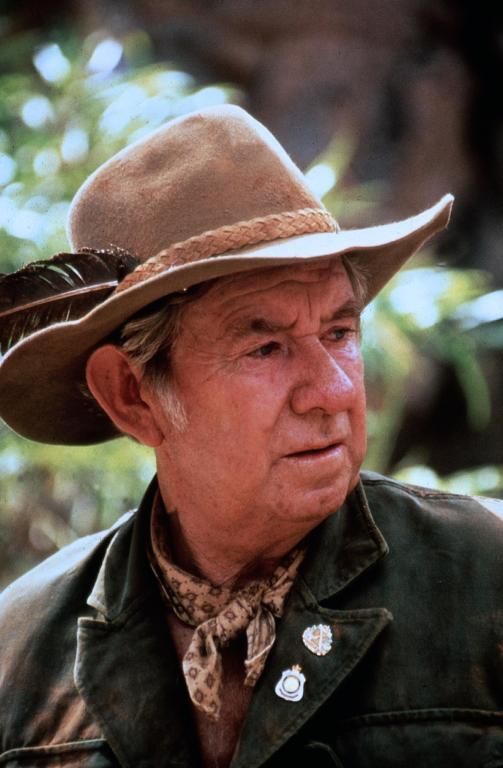 Hogan, being Hogan, is likeable, genteel and occasionally bullish – the aforementioned “that’s not a knife” moment sees him become as steely eyed as Clint Eastwood ever does – while Kozlowski, in her career-making role, is suitably upper-class yet approachably down-to-Earth as Sue. Their on-screen chemistry is excellent (it should be, because they married each other in real life shortly after this film) and although the latter half of the film tends to keep Mick out on his lonesome for extended periods, when they do eventually “hook up” it feels like it’s been building to it the whole time. Mark Blum plays Sue’s New York-based beau, Richard, whose interests appear less philanthropic as they do motivated by Sue being the daughter of the owner of the newspaper at which they both work, and to whom he wishes to marry. Blum’s character isn’t really there to do much other than provide a requisite opposite to Mick’s casual, cheery-eyed laconic archetype.

The swarthy, rugged bushman has become synonymous with Outback Australia’s personification of sweaty masculinity in the years since Crocodile Dundee launched Australia onto the Hollywood movie-making map. Culturally passive and generously lovable, the film’s thickly ladled sense of ockerism and Australiana is almost impossible to outright hate, even though the stereotype it launched is somewhat grating with its overt simplicity. Mick isn’t an idiot, sure, but his lack of discernment in New York doesn’t quite fit with how easy-going and sly he is back home. That aside, there’s so much to love about Crocodile Dundee’s mild, knockabout charm, you’d be crazy to think too hard about the plausibility of it all.