It’s hard to comprehend that at one point there was a time where the Austrian Oak, Arnold Schwarzenegger, wasn’t a pop-culture icon. The guy’s been in movies longer than I’ve been alive, so it stands to reason that I have no memory of a cinematic period without him – Governator era notwithstanding – but he seems to have been around forever: hell, half the top ten film quotes of all time could probably be attributed to him without too much trouble. Before he struck international superstardom with James Cameron’s The Terminator, the role with which he’s most closely identified and best remembered, Arnie spent most of the 70’s working as a professional body-builder (seven time Mr Olympia winner, a long-standing fact that seems to have gone missing in his post Gubernatorial career) between bit-roles in Hollywood. The documentary film Pumping Iron led to Arnie’s casting in the title role of Conan, the central character in a series of pulp fantasy books written by novelist Robert E Howard back in the ’30’s (so, pre-dating Tolkien’s Lord Of The Rings by several decades), who approximated a mix of Burroughs’ Tarzan and the mystical dark magic of sorcery with the flash of steel and a simplistic masculinity. The part of Conan would be Schwarzenegger’s breakout role, spawn a sequel (Conan The Destroyer) and eventually a reboot (Conan The Barbarian, in 2011), and propel the marble-mouthed immigrant to an icon of popular culture the likes not seen since Chaplin and Keaton ruled the screens. 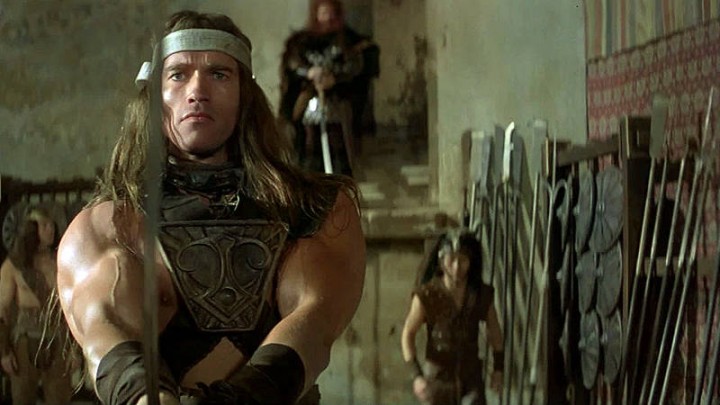 Set in the fictional Hyborian Age, milennia before the rise of “modern civilisation”, clusters of humans lived in a kind of medival Dark Ages filled with magic, mysticism and bloody, brutal death. A young lad, Conan, is told by his father (William Smith) not to trust anything but the steel of his sword. Later, Conan’s mother, father and entire village are slaughtered by a raiding party led by the vicious Thusla Doom (James Earl Jones), who snatches the children away to become slaves in his internment camp. Year later, an adult Conan (Schwarzenegger) escapes, to lead an itinerant life accompanied by fellow thief (and archer) Subotai (Gerry Lopez), as well as blonde brigand Valeria (Sandahl Bergman); journeying across the land, Conan soon becomes aware of a chance to strike revenge on Doom, who has kidnapped the daughter (Valerie Quennessen) of a local King (Max Von Sydow) as part of his cult. Intent on avenging his murdered parents, Conan and his friends strike a deal with the King and attempt to insert themselves into Doom’s heavily guarded fortress and rescue the princess.

In researching this review, I came upon some commentary which suggested that Conan was part of a concerted anti-feminism push by film-makers during a period when feminism had taken root in the American psyche. I can’t claim to know much about that, but if you’re looking at Conan with zero sense of its time and place in cinematic history, you’d probably be agog at just how anti-feminist it truly is. In appreciating what director John Milius and co-screenwriter Oliver Stone were attempting to do, Conan is chock full of masculine iconography and rampant misogyny, including the rather connotative way female star Sandahl Bergman is grasping the hilt of her sword in our logo at the top of this review. In many ways, Conan does represent an over-masculinity present in cinema at the time, as predominantly young male audiences sought refuge from a wash of female empowerment by watching films which (rightly or wrongly) eschewed maternal ideas for bloody butchery and raw, pulsating sexuality.

Perhaps I am overthinking Conan The Barbarian. Perhaps it’s just a simple, harmless fantasy movie in which multiples of buxom, beautiful women adorn themselves in a variety of sexily cut, wafer-thin costumes leaving little to the imagination, and more than a few actually having said costuming removed to casually titillate the adoring demographic. Conan is a Man’s Movie, a film designed to sate the fantasy element of an all-conquering male hero amid a brutal lifestyle and surrounded by women casually referred to as “sluts” at one point in the movie. Indeed, with women being treated as nought but sexual objects, or devious manipulators (as is the case with Cassandra Gava’s short-lived by definitely buxom seductress witch early in the film), there’s little room to examine the hedonism and testosterone-infused style with which Milius cobbles a vague story out of this tosh.

Conan is a pretty crappy movie, all things considered. Sure, it’s a product of its time, and the effects are largely hokey by todays standards (an attack of ghosts or some shit on a comatose Arnie after he’s crucified by Doom at one point is effective but somewhat cheesy, and almost a direct copy of what Spielberg did at the end of Raiders Of The Lost Ark), but in spite of its clunky, overly masculine approach to the source material, there’s something inherently unlikeable about it all. Exploitative? Yeah, in spades. Schwarzenegger wasn’t a star yet, so it’s cool to see him struggling to not only keep a straight face (or kiss properly – dude, sometimes a lady needs some tongue, you know what I’m saying?) but to utter his relatively nonsensical dialogue with any degree of our understanding him. Arnie’s accent was thicker than industrial glue, and it would appear that no matter the volume of rehearsal and training the poor guy underwent, Conan’s lines became a mish-mash of ill-enunciated corn syrup ladled over a visual collage of fur, angry framing and a penchant for lusty women.

The film’s bold typeface font credits should indicate to the first time viewer what kind of film they’re in for. Conan’s legacy of bloody revenge, a muscular anthology of minimally conceived set-pieces and a vague through-line of appropriately misplaced aggression, is right up the alley of teenage boys struggling to find their place in the world, but for everyone else it’ll be a bit of a chore. To be honest, I viewed this film more as a curiosity than as anything warranting artistic introspection. As I said, I’ve probably overthought Conan way too much already. With Arnie’s mumble-mouthed dialogue often overdubbed, as well as the glorious Sandahl Bernhard offering scant dramatic heft as a character (a)mounting to a visually palatable sidekick against the star’s bulging pectorals, and famous American surfer Gerry Lopez (yeah, it confused me too) as Sabotai, Conan’s action sequences needed to offer considerable potency to offset the film’s failings elsewhere. And an actor of James Earl Jones’ calibre need not sully himself with a villain so ineffectual as Doom turns out, but hell if it isn’t fun to watch the guy chew scenery like nobody’s business. 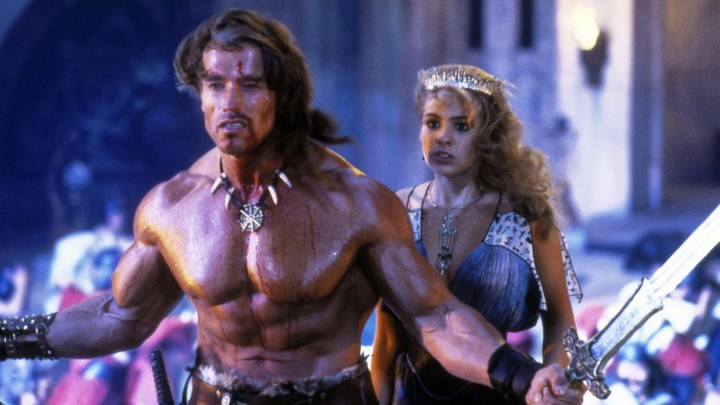 By and large, the film is a watered-down bloodfest, a film about perception and sleight-of-hand rather than overt gore – although there is some nice weaponry effects, I admit, in key moments of the film. I’ve seen worse, though, and Conan doesn’t rank as the most violent film ever made, by a considerable distance. That’s not to say Arnie doesn’t have his moments – a nice “battle” between Conan and a giant boa constrictor (I think that’s what it was) works better than I was prepared to credit initially, while the film’s key finale sequence, in which Conan and Co penetrate Doom’s fortress (as Freudian a phrase as I can muster for a film so oversexed it’s ridiculous), is a highlight of not only the film, but of 80’s cinema overall, really. But a fair portion of the film is either Arnie walking somewhere, getting his ass handed to him by Doom’s goons, or making love to a variety of female co-stars, and badly at that. Tedious, perhaps, what with a piecemeal story holding up with limited appeal as the brooding dark-edged aesthetic starts to take its toll.

Conan The Barbarian is a purist’s best shot at Howard’s eponymous hero really being given the weight he deserves. A backhanded compliment for sure, because the film turns out to be pretty mediocre and doesn’t hold up well. Arnie turns in a suitably physical performance (his iconic moment swinging that enormous broadsword about shows off his rippling physique to great effect) and the production value on the project is immense, with vast sets and enormous amounts of extras roped in to fill those sets, giving the film an epic-ness that lends itself to an age prior to digital crowd insertion. Spectacle aside, the story is naff, the characters generic and rote, and the acting barely rises above contemptible (Max Von Sydow almost looks embarrassed to be in this thing, and tries desperately to hide behind his facial hair and costume) but for sheer curiosity value alone it’s worth a look.