The character of Frank Castle, better known as The Punisher, has been appearing in Marvel comics since his debut in 1974 – which makes him a year older than I am – and to be honest, I’ve never really had much experience with him. Tangentially through my comic reading, Castle’s vigilantism never really appealed to me that much, although now that he’s become a staple of Marvel’s in-MCU continuity – currently in the second season of Daredevil, and played by Jon Bernthal – I felt it time to reacquaint myself with the bullets-n-blood anti-hero who goes where even Batman fears to tread. 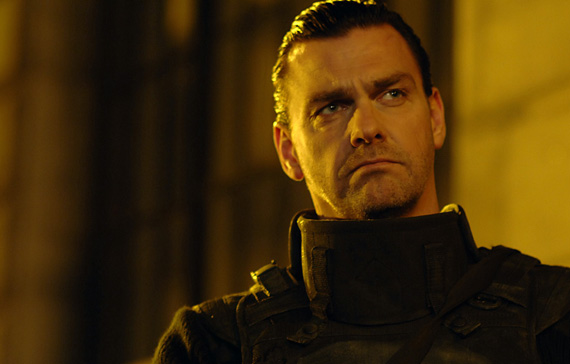 Frank Castle (Ray Stevenson) is a vigilante targeting the various mobs and gangsters on the streets of New York City. A former special forces operative, Castle’s wife and kids were accidentally killed during a botched mob shootout; as a result, he wages a one-man war on crime and corruption, with his armourer Microchip (Wayne Knight) providing weapons, and local NYPD Detective Soap (Dash Mihok) providing an “in” with the law’s intelligence systems. Local mob wannabe Billy Rusotti (Dominic West) is one particular target, however after Frank accidentally kills an undercover FBI agent during his pursuit, Russotti goes after his wife (Julie Benz) and daughter (Stephanie Janusauskas), leading Frank to continue his war. When Russotti is horribly disfigured in a vat of broken glass, and becomes the psychotic Jigsaw, he unleashes his equally insane brother (Doug Hutchinson) from the mental hospital and goes on the attack.

I, like the rest of the world, apparently, wasn’t as impressed with the Thomas Jane version as I should have been to warrant his immediate return to the big screen. Nothing against Jane personally, I thought his portrayal of Frank Castle was decent, but he was badly let down by a pretty average story and even worse direction. Cue War Zone, the third feature film for Castle (following Thomas Jane and the let’s-forget-it-exists version with Dolph Lundgren years earlier), directed by Lexi Alexander and starring Ray Stevenson as the skull-bearing vigilante, and oh boy, what a film it is to behold! Gloriously violent, chiselled out of the granite-faced darkness of Batman’s worst nightmares, and featuring a supporting cast of quite decent talent, I can’t quite understand for the life of me how this film wasn’t a runaway success. 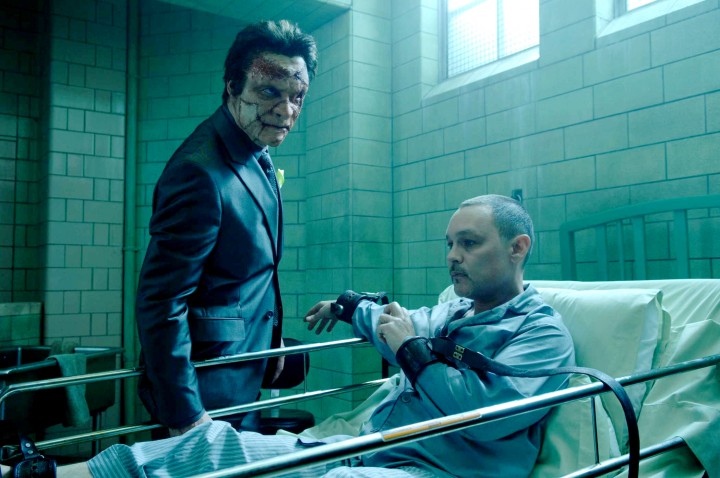 War Zone was produced under Marvel’s “Knights” imprint, skewing the film into decidedly adult territory to differentiate it from the then-nascent MCU (Iron Man had barely cooled at the box-office by this point, and Fox’s X-Men were jumbling their wares with audiences), but somehow it failed to register with the box-office, flailing about to drag in around $US10m domestic. Here in Australia I’m pretty sure it went straight to DVD, a criminal waste of dark, violent excess that surely must have excited the Marvel fanboys. I cannot fathom how a film this dark, funny and violent managed to escape making a profit. Given the recent fanboy praise for the equally violent Deadpool, it’s even more confusing. The market for these kinds of films is around, I know it.

I make comparisons to Batman as a point of reference in that Frank Castle isn’t blessed with any particular powers, making him as human as Bruce Wayne, while his access to high-grade weaponry echoes Batman’s vaunted priceless ability to just buy whatever he needs to achieve his own ends – about the only difference between Batman and Frank Castle is that one has a “no kill” policy, and the other does not. Both heroes are born of tragedy: Bruce Wayne’s parents failed to survive a night in Gotham’s backalleys, while Frank Castle’s family had the misfortune of sitting in the way of some stray bullets not even meant for them. The fracturing of Castle’s psyche, similar to that which drove Wayne to become Batman, is compelling back-story, although The Punisher’s on-screen history suggests his is at least not as interesting to as many people as Batman’s is. It’s Frank’s disassociation with life, his emptiness allowing him to just flat-out murder people with his own brand of justice, that makes him such a unique and interesting character. 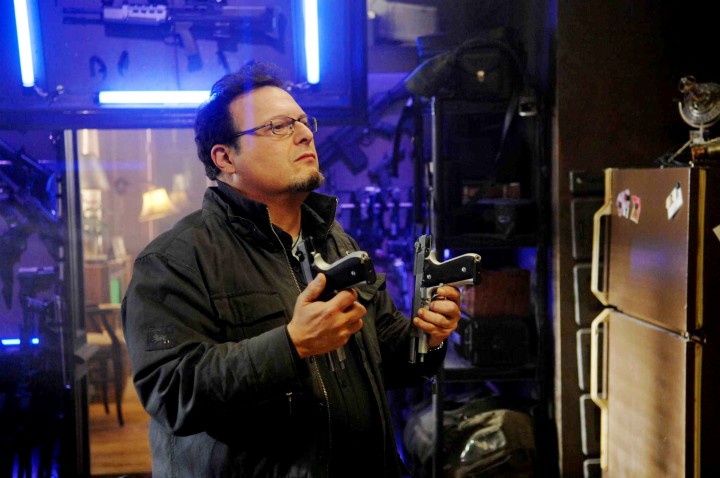 War Zone tries to imbue that sense of loss and personal torment throughout it’s sickly-crisp narrative, but more often it becomes lost amidst the thunderous score (by Michael Wandmacher) and the frantic sound design of Castle’s assaultive action sequences, leaving one wondering what might have been. At times, War Zone’s aesthetic lingers on a vaguely Joel Schumacher-esque sense of incongruously hideous villains – both Dominic West, as Jigsaw, and to a lesser extent Doug Hutchinson, as Loony Bin Jim, skirt pantomime in their efforts to overact past the makeup and cruelly insipid dialogue – and it’s all director Lexi Alexander can do to drag the film back into that grey, musky stench of realism. At times, War Zone is just that: a bloody, body-shredding assault on audience’s shock-and-awe receptors, as bullets fly, heads explode and other physical injuries occur that make Kingsman and Kill Bill look positively pedestrian by comparison. At others, usually whenever the lovely Julie Benz and her on-screen daughter, Stephanie Janusauskas, are on the screen, does War Zone soften in any way, a tacit acknowledgement that Castle’s war on corruption and crime does have unintended victims.

This dichotomy more often doesn’t work, such is the pity, but not through lack of trying. Where the film does work best is whenever Frank is doing what he does – shooting the shit out of people – and growling his lines through his teeth as he reconciles killing people isn’t going to bring back his wife and kids. This aspect of the film does work – in this film, Castle is an empty shell looking for something to fill it, and all he sees is that killing assholes like Jigsaw and his associates is a way of doing that. Ray Stevenson’s ice-cool portrayal is evenly handled, while Wayne Knight is actually bearable (I normally detest him, the over-actor he is) as Micro, and Julie Benz is wasted here in much the same way she was in Rambo. 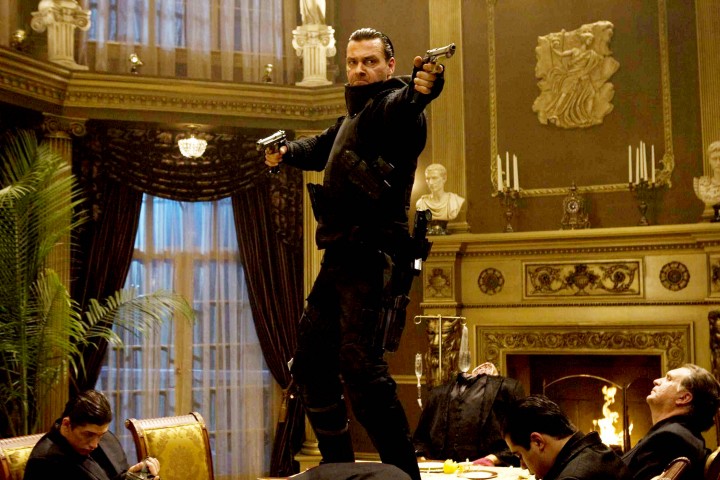 Let’s face it, though – you came to War Zone to see people being killed, and this film delivers. Although it’s not the non-stop orgy of death I was kinda expecting, particularly from the film’s promotional material, what there is is plentiful, wonderful, brutal, and expertly filmed. Action is a tricky beast to get right, really. You either end up showing too much, not enough, or confusing the audience with that horrifying shaky-cam shit nobody can make sense of. War Zone’s a bit of a mix of all of that, but the mix is spot on brutal and, at times, shocking. Like Kingsman’s famous church-massacre sequence, there’s gore and mutilation and blood all over the place here, as Frank Castle’s unstoppable war continues apace. The film does struggle with Frank’s physical strength and endurance a little, logically, for in one scene he goes toe-to-toe with Colin Salmon’s what-the-hell-is-this-guy-doing FBI agent character, who gives a good account of himself, and the next he’s a superhuman Wolverine-ish machine that couldn’t be stopped if a train fell on him. The gun-battles and hand-to-hand stuff are just brutal, slug-it-out carnage, and Alexander’s camerawork is both frantic and assured as she covers all the story beats with ease.

The film’s iffy plot logic will make most people scratch their heads a little – at one point, the FBI release both Jigsaw and Loony Bin Jim back into the public again, knowing full well the carnage they have already wreaked, and will continue to do so, and it boggles the mind that this could ever be conceivable, even in adult fiction comics like this – so put some of it down to creative license and forget it. Sure, the character development isn’t as subtle as it could be, or even as well rounded as it needed to be, but the film’s roster of acting talent brings considerable heft this aspect in spite of inherent scripted limitations. Instead, bask in the glory that is one of the better adult action films to arrive at your eyeballs, and, logic be damned, it’s a hell of a lot of fun.

Sure, it tips into pantomime here and there, and Doug Hutchinson’s loopy performance is worth the entry fee on its own (to be honest, the final showdown between Frank and his two key adversaries is handled too perfunctorily for my liking, but I would guess at budgetary limitations preventing this from being the truly epic showdown it deserved to be) but canny direction from Lexi Alexander, solid performances by Stevenson, Salmon, and Dash Mihok (didn’t he have a bit-part in Starship Troopers?) among others, and Punisher: War Zone is a Marvel film I look forward to revisiting more than a few times.