Hey kids! Did you know, before Sylvester Stallone and Wesley Snipes kicked ass in The Expendables 3, they kicked each others asses in Demolition Man? No? True story! Before his career derailed into oblivion in the 90’s, Stallone made a number of box office hits, while Snipes appeared in mainly direct-to-video slop, occasionally appearing alongside better actors (such as here) as his career tail-spun through C-grade trash. Demolition Man unites these two great thespians in an odyssey of destruction so enormous, so punch-drunk on its own supply, it has to be seen to be believed. Featuring meta-humor well before the term was even coined, a terrific sci-fi futurist aesthetic, and Stallone engaging in casual flirting with future Academy Award Winning actress Sandra Bullock (hey, we all have to pay our dues), Demolition Man is a crowd-pleasing, hugely enjoyable romp through enough casual cursing, bullets and explosions to make even the most jaded action fan applaud. 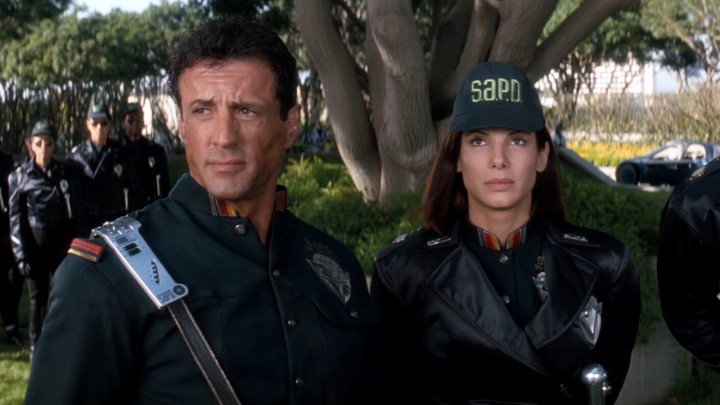 It’s “the future” – 1996 Los Angeles. Stallone plays LA Police Sergeant John Spartan, a human wrecking-ball on a mission to capture murderous psychopath Simon Phoenix (Snipes); following the destruction of a building and the apparent manslaughter of around 30 hostages in a takedown gone wrong, Stallone is sentenced to 30 years in a cryo-prison, while Phoenix is put away for life. In 2032, Phoenix is revived by underhanded means, returning to find a future vastly different than the one he left. A massive earthquake in 2010 wiped out much of the population, and now Los Angeles, San Diego and Santa Barbara have become one city – San Angeles, a virtual utopia designed by Doctor Raymond Cocteau (Nigel Hawthorne), a seemingly philanthropic evangeslist who has created a pacifist society now clueless as to any forms of violence. With Phoenix on his own agenda, to seek out and kill the sewer-dwelling Edgar Friendly (Denis Leary) and his rag-tag group of insurgents, police officer Lenina Huxley (Sandra Bullock) suggests reviving Spartan to take down his arch nemesis, by any means necessary.

Demolition Man is a ridiculous, stupid, asinine film devoid of intellect or cult credibility. F@ck you though, this movie is awesome! Stallone, all ripped and garble-mouthed (I swear as he gets older he’s getting harder to understand) but still a major box-office draw, chews the scenery and the pop-culture irony comedy, as he slashes, shoots, punches and jokes his way through a slick, well-produced bang-bang flick that delivers on both action and explosions, and a clever humour subtext that pokes gentle fun at “current” lifestyles and societal norms. Although badly dated now – both 1996, in which the film’s opening LA-set sequence was a few years into the future at the time the film came out, and the point at which America changes thanks to an earthquake in 2010, have long passed – the film remains a gleefully indulgent slew of idiocy and comedic sleight-of-hand. 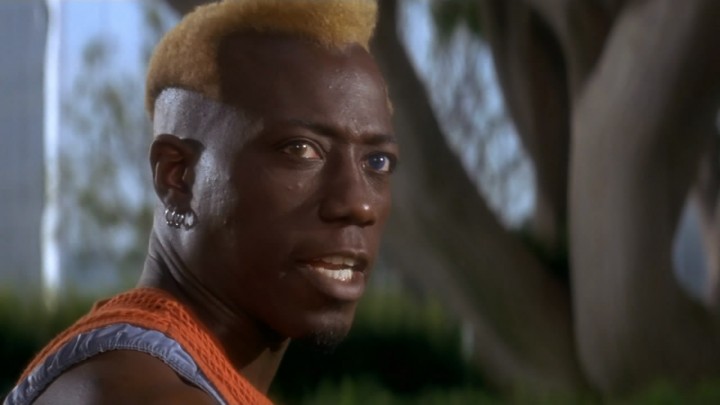 The screenplay plays with the idea that humanity has shifted vastly in the future – the popular classic music of the time are advertising jingles, the only place to eat out is at the “last survivor of the restaurant wars – Taco Bell (or Pizza Hut, if you live in Europe) – and violence, depravity, anti-socialism and other forms of “bad” have been eradicated, or suppressed, in the new world order. In a weird way, this idealised society somehow poked fun at those who perceived America to be in the grips of a violent epidemic, and considering the Rodney King trial riots had occurred only the year prior to the film’s release, it makes much of what transpires here a rather ironic, ass-backwards parody of a violence-free society. Taken to the nth degree, mind, Demolition Man is set for humorous juxtaposition at all the things that changed with Spartan was in the freezer, but it’s not a stretch to imagine that at the time, the visuals of a 1996 Los Angeles burning and destroyed and basically an apocalyptic death zone must have struck a chord with audiences at the time.

But hey, f@ck it, this is an action film, and picking up social subtext isn’t part of its charm. No, we’re here to watch Stallone and Snipes go toe-to-toe in battle, and they do a number of times. Stallone plays the part as straight-up square-jawed as he can, considering he barely moves his jaw when he speaks, and has to contort that spastic thing he calls a face into any number of wistful grimaces or angry stares, or side-eye giggles, as he comes face-to-face with “the future”, as seen through the lens of director Marco Brambilla, whose Wikipedia page indicates this film is about as far from his applied style or artisanship as you can get. You’ll note that of Brambilla’s two other feature films, one was an anthology of art porn (Destricted) and the other a tepid Alicia Silverstone comedy (Excess Baggage), so it’s fair to say his début was pretty much all he had. Brambilla helms this film with a style I describe loosely as “competent”, never once astonishing but always efficiently dexterous when dealing with the concussive action sequences. The brawling fight choreography and 90’s slam-bang editing style, newly polished following the work of Die Hard a few years prior, is steadily appreciable, lacking raw energy but accommodating what must have been two giant egos in Stallone and Snipes in the same film.

Demolition Man is a prototypically masculine action film, a film of misogynistic overstep and a vaguely hedonistic uber-style, similarly tones to the Luc Besson sci-fi masterpiece The Fifth Element, of which Demolition Man feels somewhat like a DNA supplier in many ways. The film uses many landmark LA locations to give it a decidedly “futuristic” look (at least, to those of us unfamiliar with said landmarks before Google came along) and the film’s sprawling chase scenes and use of actual locations instead of sets for a large portion of the movie give it a grounding some sci-fi films can’t attain. The film might wryly condemn outright pacifism as an inhibitor on real human emotions, but Stallone amply makes up for that by swearing and punching his way through every scene with the grace of a raging bull.

Speaking of Stallone; as Spartan, he’s aiming for a memorable character but instead becomes just Stallone playing tough-guy Stallone, which is fine and all but hardly something we’ll look back on now and say “hey gee, he played that role well didn’t he?” Snipes, however, has a blast as the jittery, snide, violently douchebaggish Phoenix (whoever names characters in these Joel Silver-produced films is a genius) and obviously was given carte-blanche to provide the character with as much swagger and smarm as he could muster. If Stallone is the straight man in this thing, Snipes is the violent, Joker-esque clown. 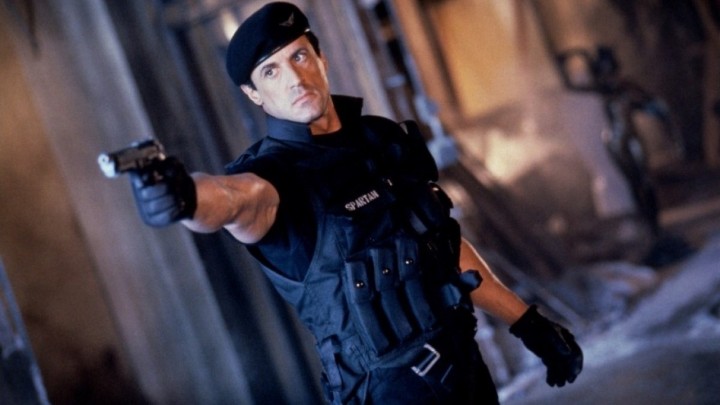 Co-stars Sandra Bullock, who seems to pitch her voice a little higher here than in following roles, Nigel Hawthorne as the conniving Cocteau, and Bob Gunton, as the blustering chief of LA’s finest, are excellent; funny and serious as required, the cast gamely try keeping straight faces with some of the double-talk Yoda-speak dialogue they have to utter (one character says, at one point, “Mellow greetings, what seems to be your boggle?”, which gives you an indication as to how hilariously redundant the future must be in this film), and with the exception of Gunton, who appears like he’s regretting putting pen to paper in signing up for this, everyone looks to be having fun. Bit-parts to Rob Schneider, who would co-star alongside Stallone in a larger role in the ill-fated Judge Dredd, as well as Denis Leary as Edgar Friendly, and Benjamin Bratt as a fellow officer alongside Huxley, are simple cases of casual cameo bits to keep the audience engaged while shit like “story” is going on.

You’re not here for that crap, though, as Stallone and Snipes seem intent on literally demolishing every single set they walk onto. Barely five minutes passes without some kind of explosion, gun battle or other action beat, and through it all you just chow down your popcorn (or whatever the hell you eat on the couch) and take it all in like a can of soda on a hot day. Demolition Man is pricelessly antiquated for not only its futurist outlook, but also its kitschy anti-bromance battle of wills between two giant stars in Stallone and Snipes. The humour is liteweight, the puns from Stallone and Snipes are often teeth-clenchingly awful and predictable (“hey look, you’re on TV” as Stallone swings a CRT television at Snipes early in the film – this is the stuff you’ll get right through the film, not to mention Denis Leary’s riffing on American culture in an echo of his popular “Asshole” single from the same year) but the action and premise is entertainingly brash. There’s no soft edges to this film, it’s all go-go-go and explosions, a bullish momentum and definitively 90’s visual tone that places the film fairly and squarely as a product of its time. Endlessly entertaining despite being insanely idiotic, Demolition Man is a, er… blast from start to finish. See what I did there?