The man with the hand is back.

Effective sequel to Wes Craven’s original features almost no returning cast – save Robert Englund, reprising his role as Krueger – and is directed by Jack Sholder, who is best known these days as a helmer of low-budget horror sequels like Arachnid and Wishmaster 2. A Nightmare on Elm Street II, subtitled Freddy’s Revenge, is almost as inventive as the original, although it has a slightly different focus for Krueger and lacks Craven’s edginess. Krueger steals the show with more of his trademark gore-effects (in an early scene, he rips his scalp off to reveal some pretty convincing brain matter beneath!), and the film’s ominous, slow-build nature is stronger here than previously: I won’t go so far to say Freddy’s Revenge is a superior sequel, rather it’s different in tone and appealingly spooky in more overt ways. It helps that Krueger’s role is greatly expanded, making him more a central character than Craven’s original film ever did. 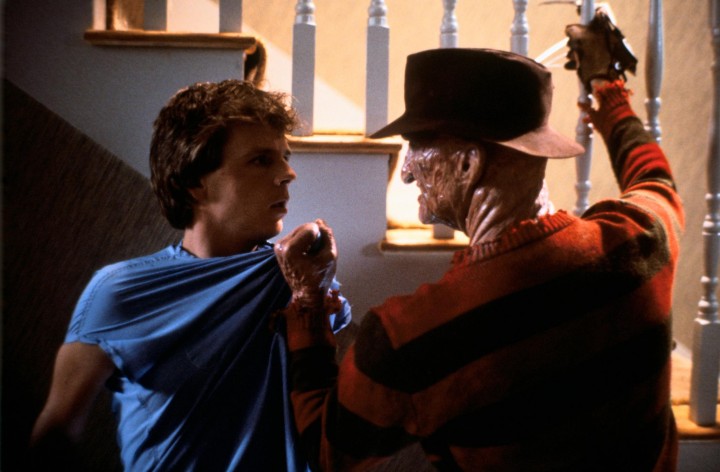 Jesse (Mark Patton) has recently moved into the house on Elm Street recently vacated by Nancy Thompson and her family (from the previous film), and is attending the same school. He’s crushing badly on classmate Lisa Webber (Kim Myers), and has an antagonistic friendship with fellow softball teammate Ron Grady (Robert Rusler). Jesse continues to suffer from recurring nightmares, in which he lives in fear of evil entity Fred Krueger (Robert Englund), who seeks to posses Jesse’s body so he can enter the real world and continue his killing spree.

Although it takes its time getting to the point, Freddy’s Revenge is a damn entertaining sequel to a film I felt was rife with problems: problems which are thankfully absent here. Key to this film’s enjoyability is the fact that the cast are engaging, the screenplay is unpredictable, and Jack Sholder’s direction is stylish and cool. Yeah, it’s still an 80’s horror film, so the dated effects and visual look of the technicolor print (I watched this on it’s recent BluRay release) are of the period – even taking that into account, Freddy’s Revenge has some nice stuff within it that make you squirm and jump with legitimate alarm.

As mentioned, the cast all do solid work – unlike Craven’s film, there’s no wooden performances here, with Mark Patton and Kim Myers having a sweet high-school chemistry together and bouncing well off Robert Rusler’s jockstrap Grady. Marshall Bell bobs up as a bully high-school coach (he meets a tragic end, naturally), Jesse’s parents (Clu Gulager and Hope Lange) are suitably concerned with their son’s increasingly erratic behavior, while Englund delights in his expanded villain role. Krueger’s plan to continue killing is chilling in that he manages to take control of Jesse’s body at times throughout the film, and it’s this differential from the earlier film that makes Krueger a vastly more insidious character by the nature of his powers. 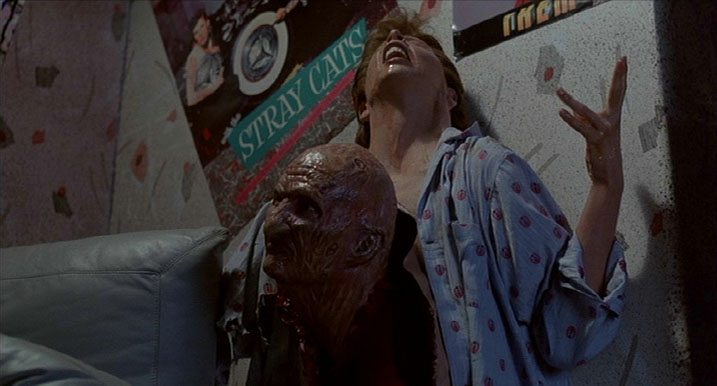 The film trips between illusion and reality without hesitation, often at the expense of participatory inclusion for the audience. Often, we have to work out whether we’re “in a dream” or in reality, and this constant work means we’re often spending time expecting things to be hallucinatory, rather than just going with it. This probably makes zero sense, but when the audience isn’t sure if what they’re seeing is real or illusion, the illusion of the film kinda loses out, especially when it’s all the time. Freddy’s Revenge has some really cool moments in it – drooping LP’s, exploding birds, and a gamut of body-horror shocks instigated by Krueger in his solid form, including a fantastic Jesse-birthing-Freddy moment midway through the film – so it’s worth watching for that alone. Okay, it lacks the firecracker punch many modern horror films enjoy, but for an 80’s budget genre entry, Freddy’s Revenge gets the job done, and gets it done well.

With its twists and turns, its game-changing venture into body possession instead of simply slaying nubile teens, Freddy’s Revenge is tonally different, and yet compatibly similar to the original movie. Did I enjoy it? Sure did, much to my surprise – I went into this one figuring it would follow the “sequels are always shitty” template most horror franchises follow, and came out admiring the work within this movie. It’s easy to see why Krueger continued to grow as Hollywood’s preeminent spectral maniac, with his knife-shackled glove and scarred visage, and this film’s shocks and occasionally graphic depictions of brutality (it’s not as blood-spattering as, say, modern horror has become) are perhaps more imaginative because they don’t show every piece of gristle coming apart. Freddy’s Revenge is great.