Drugs, man. What a bummer.

Although I’m yet to scope out much of his earlier stuff, based purely on the triple-punch of Prisoners, Enemy and Incendies, I’d happily rank director Denis Villeneuve as one of my top 10 current working film-makers, without a second thought. Thoughtful, considered, mesmerising in his impact through a minimalist, somewhat Kubrickian icy style, Villeneuve has cemented himself as an inevitable contender for a future Best Director Oscar if he doesn’t snag one for Sicario, easily one of 2015’s best films. 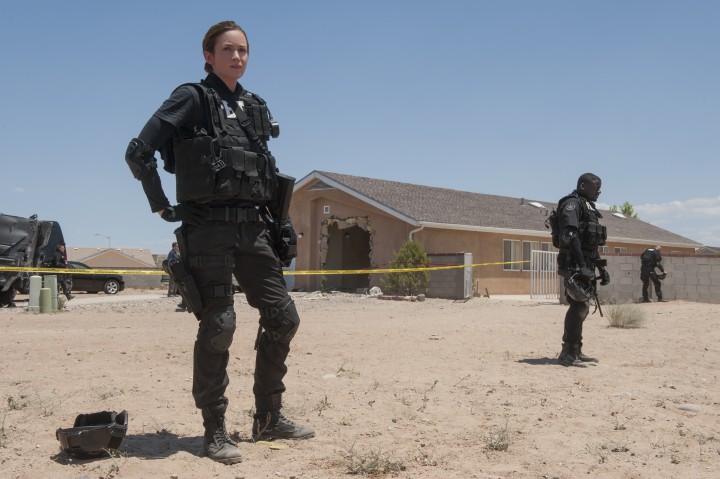 The border between the US and Mexico – a hive of activity for drug cartels. FBI Agent Kate Macer (Emily Blunt) is recruited for a special joint intelligence mission to strike back at the Mexican Cartels following a deadly raid on an Arizona property. Her CIA handler, Matt Graver (Josh Brolin) introduces her to former Mexican operative Alejandro Gillick (Benicio del Toro), and the trio take the fight to Fausto Alarcon (Julio Cedillo), the largest drug lord in the country.

Part of what makes Villeneuve such a solid director is his fearlessness. Sicario is the personification of fearless film-making; it’s a taut, wound-up coilspring of tension, a bubbling vacuum of silence and violence reeking of desperation, the hopelessness of American’s war on drugs writ large against a backdrop of Emily Blunt’s relatively youthful, idealistic FBI agent trying to find sense in the carnage. Compelling from it’s opening frame, the film’s hypnotic frisson captivates as a threadbare narrative unspools into one of the most melancholy, intractably horrifying realizations of the last few years. Part of me sees echoes of Steven Soderberg in Villeneuve’s work: a seemingly effortless realism coupled with a sweaty, pore-popping aesthetic that provides an uneven, skewed insertion into whatever world appears on-screen. With Sicario, it’s the world of the war on drugs – with Prisoners, it was the schism between predators and those hunting them down – and similarly to Soderberg’s Oscar winning Traffic, Villeneuve’s film imparts an eerily desolate tone. 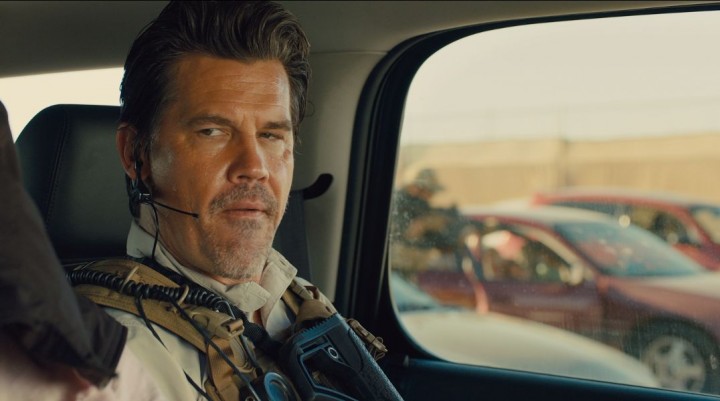 Written by Taylor Sheridan, Sicario is brutally honest about the kind of odds US officials have against the corruption and evil leeching from Mexico every day – desperate refugees seeking a better life are mixed in with the animals hoping to ply their drugs across the borders and get rich, and unravelling who is who makes life tough for both the Mexican and American governments. Barely a glimpse into this world, Sicario is like a bleeding scab, a rapidly purpling welt on the battle between those seeking to uphold the law, and those who…well, aren’t. That’s not to say the actions of those in this film could be considered lawful, but it would seem apparent that in the world of Sicario, sometimes you need to fight fire with fire, not water.

As a character piece, Sicario falters, often to its detriment. If there’s a weakness to the film, it’s this; I know as much about Emily Blunt’s character at the end of the film as I do at the start, and her arc seems merely designed to provide an audience to the actions of Josh Brolin and Benicio del Toro’s CIA operation. The film is entirely the mission, never the people. It still works, however Macer’s motivations for continuing to aide the CIA once her role in the mission is ascertained (it’s not a good role, that’s for sure) are never fully fleshed out beyond a thinly written “I need to know what’s going on”, as if somebody just threw their hands in the air and wrote past a plot hole. That said, perhaps it’s important to note that in this film, character isn’t as important as the mission, and in this sense, Sicario astonishes. 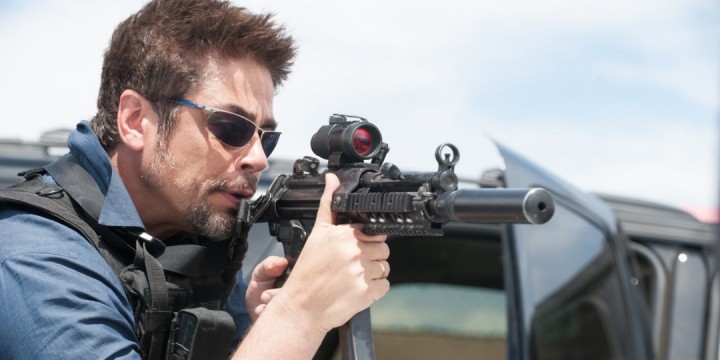 Villeneuve brings considerable tension to the film’s understated “action” sequence, most of which are brutal and bloody as you’d expect, and most definitely never sanitised for younger audiences. This is a gruesome film both visually and thematically at times, but not in any overt, heightened way; gunfire cracks with a ferocity of unamplified sound-designers restraint, the raw actuality of what it must be like in combat using high powered weapons. Peter Berg directed a film called The Kingdom a few years back, and Sicario features a lot of that same juddery, crisp aesthetic to terrific effect, only instead of Berg’s discombobulating super-zoom, Villeneuve keeps the camera pulled back – not enough to feel distant from what transpires, but enough so that we can make out what’s happening all the time. Sicario isn’t a film of action, it’s a film of actions, often actions that have consequences beyond what our main characters can see. Lensed by Villeneuve regular Roger Deakins, the same man who gave us the cool magnificence of Skyfall, Sicario retains that dusky, dusty brown-and-blue visual style many modern cinematographers use to differentiate between Good and Bad, albeit in this film it’s less obvious than it ought to be.

In spite of a lack of real character development, however, Villeneuve makes us invest in the people in this film through sheer force of personality. Emily Blunt, leading with her best tortured avenger face on, plays Macer as well as she played Rose Vrataski in Edge Of Tomorrow – hard-bitten, edgy, morally centered, albeit overly idealistic in the face of such evil and desperation. Blunt is an actress who delivers a far greater performance than simply her dialogue might indicate – so much is written on her expressions and behind her soulful eyes, and Sicario brings out the dull thud of human wreckage as a cathartic journey of overwhelming horror overtakes her. Blunt is terrific here. My only issue? For a trained FBI Agent, she’s taken down physically by two men during the course of this film, which seems the antithesis of her abilities that saw her snag the job of going on the mission in the first place. Basically, Macer gets owned like a bitch, which didn’t ring true to the film in terms of exactly who her character is. 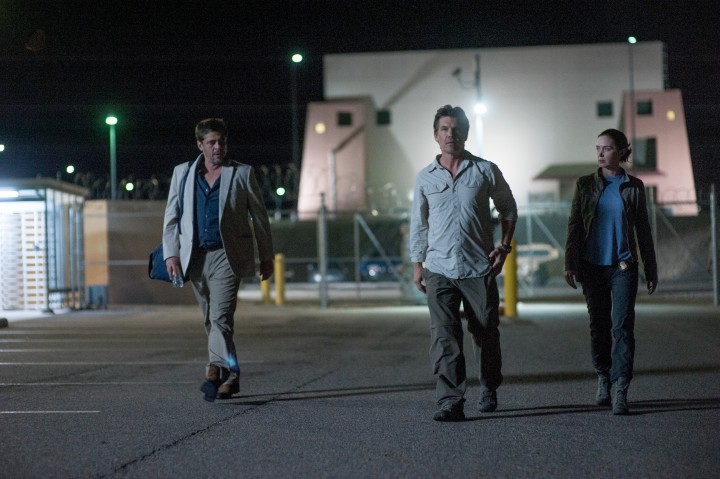 Her co-stars, primarily Josh Brolin and Benicio del Toro, are equally fantastic, although acting honors across the film entire belong with del Toro, whose commanding, utterly shocking, devastating role as a former Mexican drug runner himself provides one of the films most gut-punching moments. Sicario is a slow-build to unimaginable violence, a brief burst of revenge, justice and ruination atop a mountain of brooding malevolence; the depths of sadness and anger behind del Toro’s eyes in this film are palpable. Brolin’s CIA operative role is cavalier to the point of frustration for Macer, and Brolin’s shit-eating grin as he circles Macer’s virginal ignorance tells us more about his character than any flashback of characterisation ever could. Brolin eats this role up, and sells it perfectly. Small roles to Victor Gerber, as Macer’s boss, Jon Bernthal, as a corrupt border cop, and Daniel Kaluuya, as Macer’s FBI partner Reggie, flesh out the supporting roster, but with both Blunt and del Toro delivering career-best performances it’s hard to look anywhere else.

Sicario is like a punch to the chest, emotionally. Searing in its indictment of US drug enforcement policy (fictionalised as it is here), powerful in the characters it portrays, and never once pulling a punch, Sicario ranks as one of the must-see films from 2015. Although I lament the lack of backstory or depth to Macer’s part in the film, other than cursory moral fortitude, the film’s point probably isn’t that so much as it is a potent wake-up call to just how difficult dealing with the Mexican drug trade must be. Sicario is essential viewing.