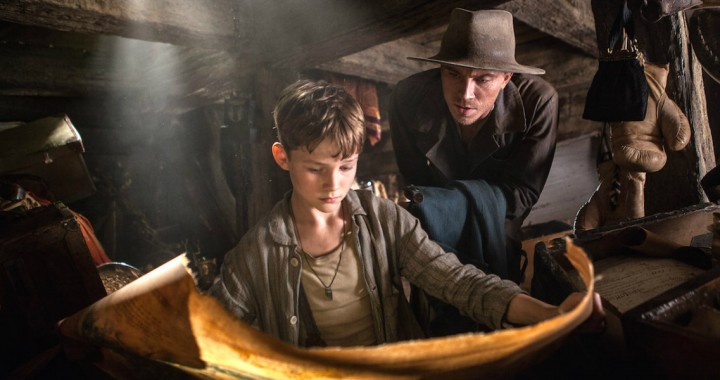 Because there are no new ideas in Hollywood, mining familiar properties has become the default setting for studios more wrapped in risk-averse properties than taking a chance on something fresh and new. For the umpteenth time, the literary iconography of Peter Pan is brought to the big screen – notably, the character previously appeared in the hit Disney animated film, a Spielberg-directed, Robin Williams-starring live-action adventure, and an Aussie-filmed remake in 2003. Apparently not only did we need to see this character again, but the powers that be have decided JM Barrie’s original story wasn’t up to snuff this time round, so we get a ubiquitous “origin story” film, replete with knowing hints and backstory to characters you know and love. Directed by Jow Wright, better known for his Keira Knightley remake of Pride & Prejudice, the war drama Atonement, and more recently the action-thriller Hanna, Pan removes a lot of the mythology of Peter Pan’s origins and shines a bright light on it instead; although people might love the character, one wonders if we’re that invested in him to warrant a story about the minutiae of his childhood and ascent to the literary pantheon. 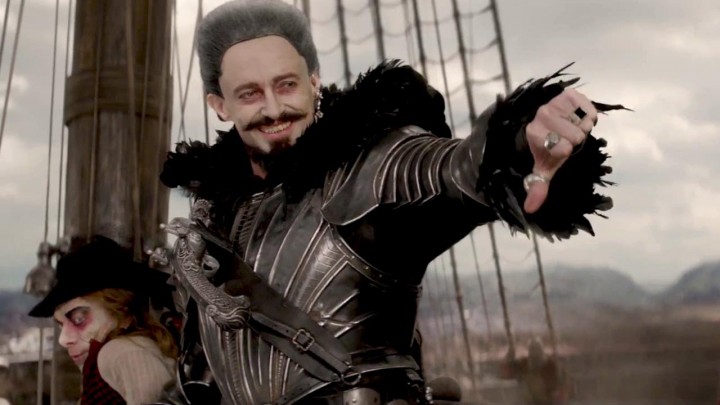 Hollywood often struggles with “reimaginings”, particularly with long-standing iconic works of fiction, because most of the good stuff has already been done. Disney’s Peter Pan is considered (still) the best version of Barrie’s character, while other literary creations such as Frankenstein, Dracula, the various works of Dickens, et al, have largely misfired in modern times due to a prevalence of overt tinkering with the source material which somehow robs them of their mystery and magic. About the only long-standing author who maintains a sense of erudite superiority in all this is Shakespeare, but even he’s had some big-budget turkeys along the way.

Peter Pan’s childish piquing of the reader, and thus the film viewer, is a key aspect to the character’s success or failure; an interpretation on Pan often overlooks, or avoids, the tacit immaturity of its lead character, and many film-makers try and make him somehow more human in order to allow the audience to invest in him. To my mind, the idea of Pan works best when the story focuses on the Darling children – see the 2003 film for a solid example of that done right – rather than with Pan as the central character; Robin Williams’ valiant effort to essay an adult Peter was fitfully workmalike, albeit surrounded by a weird nasty-vibe in Hook, while Jeremy Sumpter’s performance, although solid, wasn’t the driving emotional force behind Peter Pan’s post-millennial success.

Why, then, did anybody think a convoluted backstory to Peter Pan’s relatively simplistic archetype would make for good blockbuster fodder? Jason Fuch’s script, which sees Peter (Levi Miller) as an abandoned child raised in a London foster home, before being kidnapped by the pirate Blackbeard (Hugh Jackman, in what could be a legitimate Raspberry Award winning acting moment), to the mysterious Neverland, where he learns that he is the chosen one who will kill Blackbeard and set the land free. Accompanied by long-term prisoner James Hook (Tron:Legacy’s Garrett Hedlund) and local Piccanninie Tiger Lilly (Rooney Mara), Peter tries to find his long-missed mother and stop Blackbeard from hunting down the legendary Pixie Dust, which keeps him youthful. 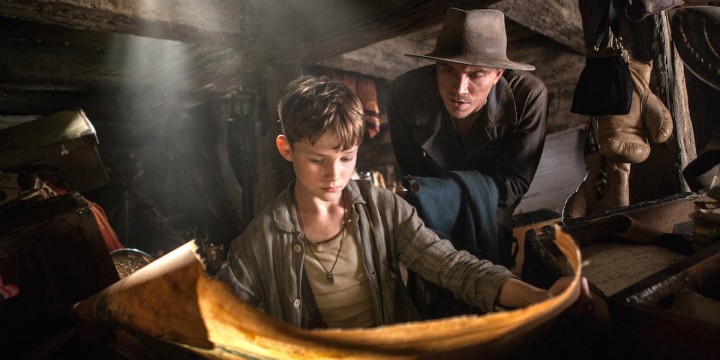 I’ll hand it to Pan: the film starts well enough. Levi Miller makes an engaging if obscure leading character, impish yet weirdly distant in terms of his motivations. Abandoned by his mother (Amanda Seyfried) on the steps of a London orphanage, you think Peter would grow up to be as rapaciously indignant as his fellow inmates, and yet retains his erstwhile innocence in spite of all the cruelty inflicted by the orphanage’s mother superior (a brief and classy turn by Kathy Burke). Wright manages to make Peter a likeable kid, and his tormented situation as heartbreaking as any other kid stuck in London during the Blitz in World War II. The action-packed kidnapping of Peter and a multitude of other kids from the orphanage by Blackbeard’s ship is genuinely exciting, and trumps up the stakes considerably, even if the expense of character bears too much transgression to warrant consideration. And just when you think the film is bubbling along nicely….. along comes Nirvana.

Now, I’m no literary expert, and most definitely lack even a rudimentary understanding of quantum mechanics and the laws of space-time, but I’m pretty confident at no point in JM Barrie’s life did he ever consider the lyrics to Nirvana’s “Smells Like Teen Spirit” a solid accompaniment to Peter Pan’s mythology. While it worked for Bazz Luhrmann’s Bohemian cauldron of Moulin Rouge, the arrival of Blackbeard’s ship into Neverland to the strains of kids singing Nirvana’s grunge classic will make your eyes pop from their sockets in disbelief. Shuddering, you think to yourself “Okay, I’ll see where this discordant snippet of ideology takes me” before realising that, much like the remaining hour and a bit of the film, Wright has absolutely no idea whatsoever. Putting pop-culture iconography into anachronistic settings works when a film earns it – the aforementioned Moulin Rouge made this kind of thing work superbly – but at no point does Pan ever build up to, or set up the use of, this idea to make it work as anything other than maybe a snag for the earbuds of Generation X’s soundtrack downloads. 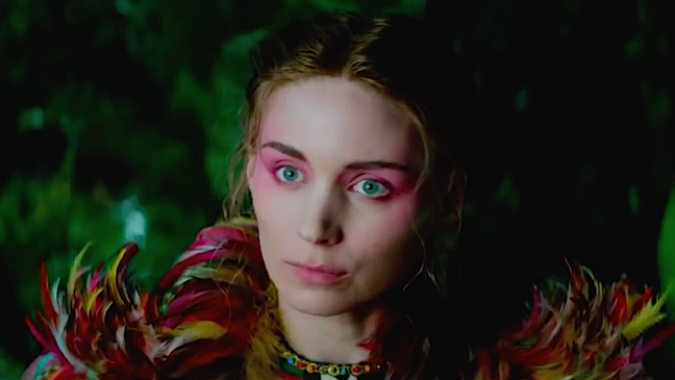 Although Wright digs his heels into John Powell’s appropriately Piratey musical cues (there’s an obvious sense of archetypal motifs within Powell’s score, given it mimics Hans Zimmer’s Pirates Of The Caribbean strains from time to time), his direction is as “crowd pleasing” as a death scene at Seaworld. Wright’s direction of Pan seems analogous to having an elephant blow paint through a straw at a canvas and calling it art. There’s lots of cool stuff going on in Pan, from a creative visual perspective, but it’s an empty, lifeless CG-fest teeming with digital colour grading and a weightless stuffing. Sweeping camera moves surrounding green-screen sets and a hodge-podge of design-vomit cliché do not a compelling story make, although one gets the sense that the younger kids watching it might find it suits their attention-deficit genetics more than older film buffs. This is a film designed to sell colour schemes, a deafening costume designers nightmare mixed with a cinematographers wet dream. As vibrant as the film looks, it’s a shame the story doesn’t match what Wright achieved in his camera.

Then there’s Hugh Jackman. As Blackbeard, he’s Pan’s villain – James Hook, the well known pirate enemy of Peter Pan in Barrie’s books is played here by Hedlund like some Han Solo-esque rapscallion, who’s not entirely bad – and as abusive a screen character I’ve yet to see bettered in 2015’s output. Jackman’s teeth are gnashed to pieces as he snarls, swoops and chews the scenery (much of it against green screen, less plaque that way), in a role designed purely as an antecedent to Hook’s inevitable arch-nemesis position. It’s a dandy-role for Jackman, whose effusive personality seems at odds with the man’s ability to convey true nastiness – leastways, with all his flamboyant show-boating, Jackman gets a chance to fully shed his Wolverine and “romantic comedy” personas for a momentary dirge of theatricality. 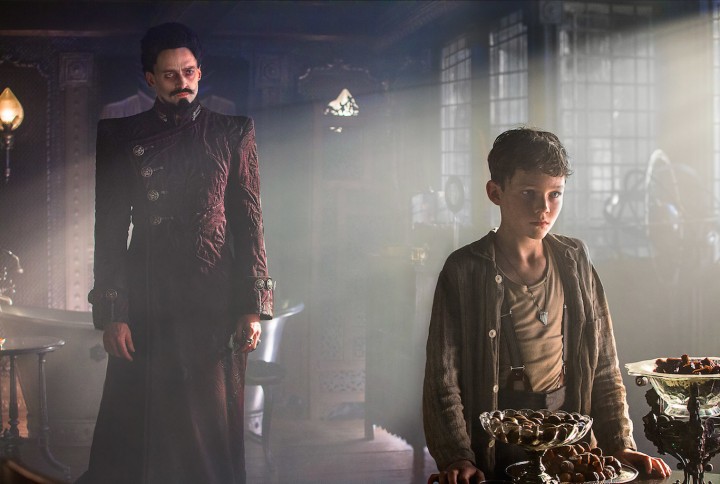 The supporting cast are a bit of a mixed bag, to be honest. Garrett Hedlund makes a good fist of Hook, Rooney Mara is a bland-as-buggery Tiger Lilly, while Adeel Akhtar does one of the better Mr Smee’s in recent memories. At least his character seems rooted in some kind of core truth, unlike Levi Miller’s Peter, who vacillates between childish petulance and teenaged maturity that doesn’t quite land as comfortably as Wright might think. Amanda Seyfried’s appearance as Peter’s mother is fleeting, while seeing Aussie actor Jack Charles drawl his way through the role of Tiger Lilly’s father is hilariously amusing (for all the wrong reasons).

Pan is a bit of a mess. With a dribbling “chosen one” narrative interspersed with obligatory “setting-up” the world of Peter Pan we’re more familiar with (at some point, you know Hook and Peter are going to become mortal enemies), an ill-conceived “finding my mother” motif for Peter (which, I admit, fits into Barrie’s literary conceit but fails to resonate here, for whatever reason), and a singular abundance of more-is-more design and “epicness” for the film’s visual aesthetic, Pan labours the point more than is required and effectively comes apart at the seams. The action sequences are well filmed, I’ll grant you, but the emotional heft of the film is buried beneath a blitzkrieg of “throw everything at the screen” film-making. Which comes to circle around the idea that trying to give relatively thinly developed characters a deep and convincing back-story is an effort fraught with danger. Props for trying, I guess, but points off for missing so resoundingly.