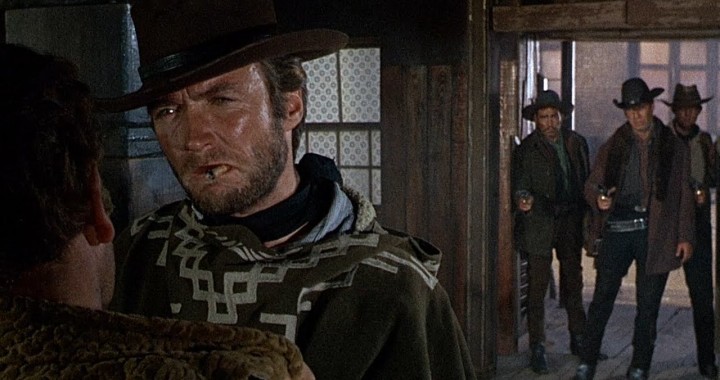 There’s no denying the formative impact the films of Sergio Leone has had one many a modern film-maker. Directors such as Tarantino and Rodriguez are among those who claim Leone’s Dollars Trilogy, of which For A Few Dollars More is the “middle film”, to be their generation’s Star Wars. It’s also an undeniable fact that Leone’s “Spaghetti Westerns “- movies set in America’s Old West but actually filmed in Europe, through Spain and Italy – have become something of an archetype in the genre’s storytelling method. Leone’s legendary economy of precision, his brilliant use of the widescreen aspect ratio, and the characters built on looks and reactions rather than violence (although the Dollars trilogy is typically trigger-happy) make For A Few Dollars More one of the most well constructed cinematic mythologies ever put to celluloid. 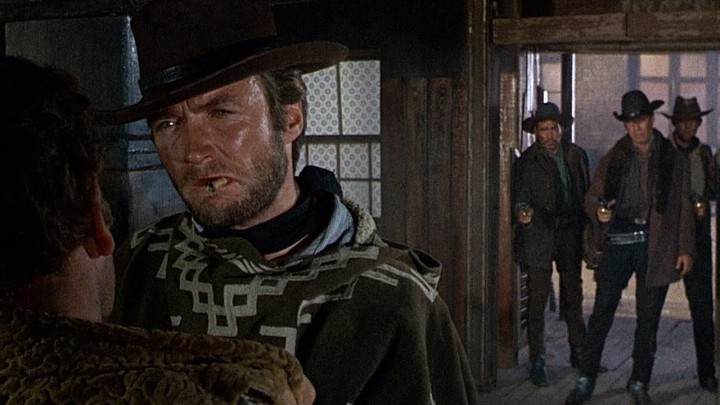 Leone’s film sees the return of Clint Eastwood’s eponymous “Man With No Name” from A Fistful Of Dollars, this time teaming up with American character actor Lee Van Cleef to hunt down and kill notorious psychopath El Indio (Gian Maria Volonte, who starred as the chief villain in the previous film, albeit as a totally different character). Both Eastwood’s character, referred to as the derogatory Manco (literally “man with one arm”), and Van Cleef’s Colonel Mortimer, seek redemption on El Indio; for Manco, the bounty on the killer and his gang would allow him to, as he puts it, “retire”, while for Mortimer it’s a matter of vengeance – El Indio murdered the Colonel’s brother-in-law, as well as raping his sister, who subsequently killed herself in the process.

Filmed primarily around the Province of Almeria in Spain, For A Few Dollars More had a higher budget than its predecessor, and this is obvious through both the large cast, the higher production values, and the expansive sense of “epicness” the film engenders. Leone’s extraordinary use of widescreen is revelatory: my only previous experience with this film has been old VHS pan/scan editions back in the 90’s, so a lot of Leone’s framing and editing was lost, but given the film is now available in HD, it’s a reappraisal I’m annoyed took so long in coming. Leone shot For A Few Dollars More using Techniscope, a cheaper, popular alternative to traditional Panavision anamorphic, and you can tell because the obvious trappings of anamorphic lensing are absent, regardless of the 2.39:1 ratio. While the film’s “flatter”, washed-out look is typical of the Techniscope process, Leone more than overcomes this aesthetic with one of the sharpest eyes for framing and silent storytelling to ever walk this Earth.

The lensing on the film was performed by Massimo Dallamano, who works with Leone as an artisan providing the full frame width of the film as a canvas on which to tell this story. Modern cinematographers might take note of the way Leone uses an economy of editing to accomplish what most current films would do in a hundred cuts. Long shots, Dutch angles and iconic over-the-shoulder shots, as well as the way wide-brimmed hats fill up the width of a shot, are masterfully achieved.

With each new scene, with each new shot, I was gobsmacked at just how well Leone could tell a story simply in framing and shot selection, with almost no dialogue. The way he uses set design, epic Spanish landscapes and extreme close-up shots of the cast to invigorate his relatively wafer-thin story is just astonishing. For A Few Dollars More is a directorial masterclass in how to set a scene, frame it, and edit it to perfection.

Watching any Leone film is like watching a silent movie with a hint of sound thrown in. As with this film’s predecessor, and equally so with The Good The Bad And The Ugly, as well as Once Upon A Time In The West, Leone’s films are about the silences, the gaps in music and dialogue that tell us more about the characters and the situations than any raucous score or dramatic screaming conflagration. The Old West’s “live and die at the end of a gun” is apropos to the violent, often cruel manner in which people are despatched, and Leone makes no bones about it with almost the entire cast offed by either Eastwood or Van Cleef’s bullets before the film concludes. But it’s the quiet moments, the soft, dialogue-free scenes that make For A Few Dollars More the exquisite work of art it is; Leone spends a lot of time capturing characters looks, their eyes, the rising tension in a scene played out in almost pure silence before the eruption of gunfire and inevitable death. 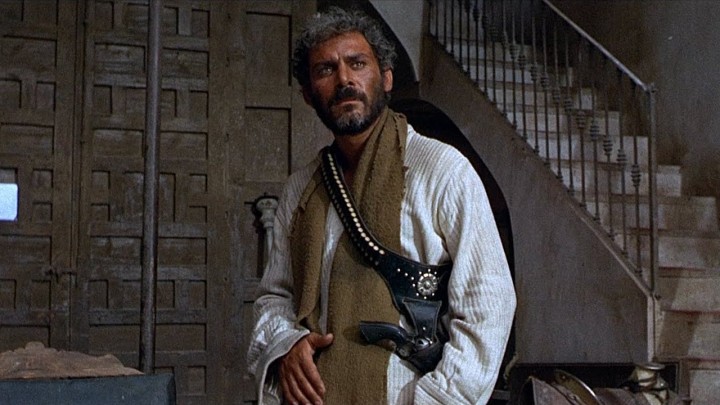 Key to the film’s overall tone is Ennio Morricone’s fabulously evocative score. Although better known for his whistle-stop theme from The Good The Bad And The Ugly, his work here on For A Few Dollars More is nothing to overlook either. Accompanying the tin-whistle repetitive motif, that vaguely Spanish “hiiiiiyah” accompaniment and an assertive 60’s sense of comic post-modernism, Morricone’s themes and lyrical counterpoints to on-screen actions is as strong as any of his other work. Frequent jump-cuts to a close-up are accompanied with a metallic twang, almost mimicking Asian action-cinema’s crash-zoom technique, and the lengthy establishing shots and scenery vistas are coupled with a sense of aching, raw beauty within the melody. There’s little doubt as to why Morricone and Leone are so intertwined creatively; they both seem to just “get” it.

In front of the camera, the stars appear to have aligned as well. Led by a fast-rising Eastwood, the fabulous Lee Van Cleef, and oily bad-guy in Volonte, the film’s roster of unique faces and classic characters – many of whom prove archetypal to the genre – are just gorgeously rendered by Leone’s cinematograghy. Eastwood’s Man With No Name does seem to drift into the backlight of his own film at times, as the film spends a large portion of time dealing with El Indio and his psychopathy, and it’s here the villainy of Volonte’s performance really excels. Although we’re never really treated to a backstory for El Indio to provide us with any empathy, or reasoning behind his murderous ways, Van Cleef and Eastwood’s personification of dangerous protagonists is where the film picks up the slack. The Colonel’s arc is primary to the story – he’s flat-out seeking revenge, a motivation that needs little examination, while his distrustful association with Eastwood’s Manco provides a vaguely paternal overtone to the film’s story of bonding through communal need.

Van Cleef absolutely nails the part – he’s ice-cold, looks hugely cool (at the start of the film we’re not quite sure if he’s a bad guy, or a good guy, or what) and circles Eastwood’s more begrudging performing style with ease. Eastwood, meanwhile, does his best grimace-and-scowl routine, a persona he’s perfected down the decades, and his gritty, raw turn as the Man With No Name is a showcase of masculine brooding action-hero. Perhaps anti-hero is more the word, for in Leone’s escapist world of leering villains, destitute townsfolk and the ubiquitous six-shooter brawling, Eastwood’s central character isn’t the white knight you’d expect in, say, a John Ford piece. Eastwood is always at his best when playing to the dark side of humanity in his Westerns – see Unforgiven for the best example of that – and his stock-in-trade looks to have been honed in front of the lenses of Sergio Leone; while offering naught but grunting, half-resigned dialogue, and chewing a cigar for much of the movie, it’s this iconic Western motif of a man who is good at what he does, only what he does being killing, that he epitomises in the minds of popular culture.

Part of For A Few Dollars More’s charm, and to a similar extent most of the Spaghetti Western genre, is it’s delightfully sketchy use of sound effects. A lot of bullets fly in this film, and almost all of them are accompanied by some kind of ricochet effect that is as out-of-context as any effect ever. Bullet hitting gravel? Richochet. Bullet hitting a stone wall? Richochet. Bullet hitting lemons out of a tree? Richochet. Bullets hitting a leather cowboy hat flying through the air? Ricochet. Hell, I’m quite sure it’s the same effect just laid down over every gunshot in the film. Does it work? More often than not, yes – it’s a similar effect to the metallic sword-swishes in those wire-fu sword-fighting martial arts films made through Asian cinema, or the dubiously iconic “cartoon running” noise made by any Looney Toons character ever – but the overuse, particularly to a modern ear more attuned to differentiating more readily, does lend itself to being a little bit silly. Punches, too, carry the weight of a snapped twig. To wit: a mid-film brawl between Eastwood, the General and El Indio’s goons sounds more like a bunch of people slapping each other with those old wooden school rulers than an actual fight. It sounds stupid, I know, but the kitschy design in many of the film’s action-centric sound effects lean more towards insufficiency than broadly acceptable. Put it down to “a product of its time”, and let it slide.

Leone’s classic Western delivers the kind of hypnotic draw he elevated in Once Upon A Time In the West. Rougher around the edges, For A Few Dollars More is a legitimate game-changer for the genre thanks to its superb, effective cinematography (some shots in this film look like they were filmed yesterday!) and resolutely sublime storytelling prowess. It’s easy to use the term “definitive” when discussing a classic Western, and I’d hate to fall into the trap of overselling the film (as a story it’s uniquely thin on the ground, only fleshed out purely through its visuals) based on a single element such as its visual aesthetic, but as a lesson to all future film-makers on the use of framing and the judicious restraint in editing, For A Few Dollars More is essential viewing.

6 thoughts on “Movie Review – For A Few Dollars More”