Director :   Patrick Brice
Year Of Release :   2014
Principal Cast :  Mark Duplass, Patrick Brice.
Approx Running Time :   78 Minutes
Synopsis:   When a videographer answers a Craigslist ad for a one-day job in a remote mountain town, he finds his client is not at all what he initially seems.

When somebody has a horrifying wolf mask in their closet, and they describe it as “friendly”, fun for your life.

Frustration. That’s the major feeling I had with Creep, a found-footage film where the unwavering sense that all is not right never once makes our protagonist scarper for his life. If anyone ever invites me to video “a spooky house on the edge of town” or “my hunt for a mysterious, supposedly mythical creature of possibly supernatural origins” or “the frat party next door”, I’m leaving that shit right there and spending the night at home on the couch. Supposedly designed to send chills up the spine, I spent most of my time watching Creep wondering why the film’s “hero”, played by director Patrick Brice, doesn’t get the heebie-jeebies and leave before things get all cray-cray. 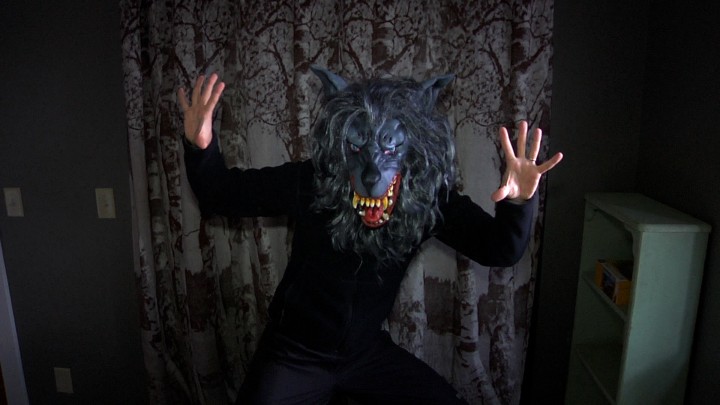 Aaron (Brice) is a videographer looking for a bit of extra cash on the side, so he drives up to a house in the mountains where he meets Josef (Mark Duplass), a man supposedly dying of a massive brain tumour, and who wants Aaron to film a little video for his soon-to-be-born child, a bit like Michael Keaton in My Life. Aaron is initially across is, but Josef’s increasingly weird behaviour, and strange stories and beliefs – not to mention admitting to raping his own wife – begins to give Aaron pause for concern.

As a horror film, Creep should work on a number of levels; it’s a locale-driven film, in that the protagonist, Aaron, is well outside his comfort zone and in no way able to return to safety (at some point he “loses” his keys), effectively trapped in an isolated outer suburb of Los Angeles (Crestline, apparently). Josef, who obviously isn’t all he says he is, offers platitudes and placating entreaties to Aaron to stay longer, to spend the night, to reveal more about himself than is really suitable for a hired videographer. Now, were I in Aaron’s shoes, I’d have left the minute things started to get weird (and they get weird early, honestly). But instead, perhaps it’s Aaron’s sense of humanity that causes him to stay (the idiot), which ends up being the worst decision he’s ever made.

The film is essentially a double act – Duplass and Brice developed the film together, with Brice holding the camera for the majority of the movie’s opening half. The lo-fi nature of the film’s single-set and minuscule cast requirements mean that the character themselves need to really sing, and Duplass takes the honours here, giving Josef a real menace, a real psychopathy, that explodes in the film’s second half. Brice, however, doesn’t give his character much development beyond being a fairly generic, bland avatar for “the viewer”, as we’re subjected to terror late in the movie. 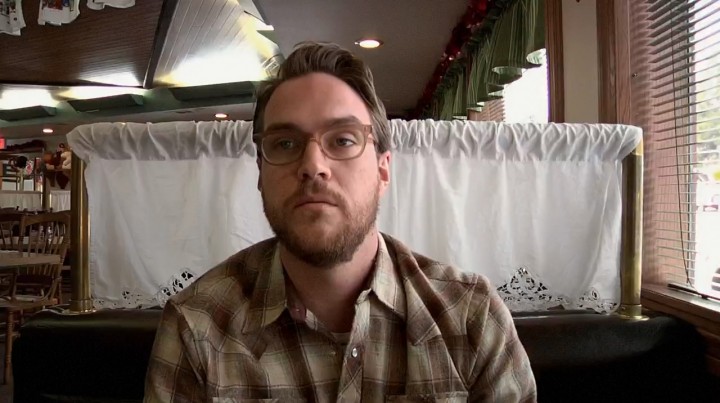 Now, the second half of Creep is really rather scary; it elicits chills and jump scares that work more often than they don’t (and I’m a big one for guessing when “boo” moments are gonna happen) but by the time we get there I’m utterly frustrated with not only the found footage style but also the inherent silliness of Aaron’s inability to recognise danger early and get the hell out. A mid-film reveal about Josef’s true nature is possibly intended to send a shiver down the spine of the viewer, but it kinda feels like it was made up as they went along (which probably isn’t far from the truth, considering Brice and Duplass spent a large amount of filming time devising alternative story beats, which could be refined in the edit.

To his credit, Duplass sells the crazy well: Josef is utterly unhinged, although deceptively so. He wavers between a “lost, sad soul” with his cancer sob-story, and outright maniac with a final act sense of creepy, insane infatuation. Naturally, the police don’t believe Aaron’s story about a crazy man (because American cops have enough to do with shooting people at traffic stops, I guess) and the poor dude’s nerves become more and more shot as videos and gifts keep showing up in Josef’s insane “friendship” with him. The film efforts to delve into pure psychological thrills in it’s latter half, but I’d lost interest by then. Frustrated, as I said. 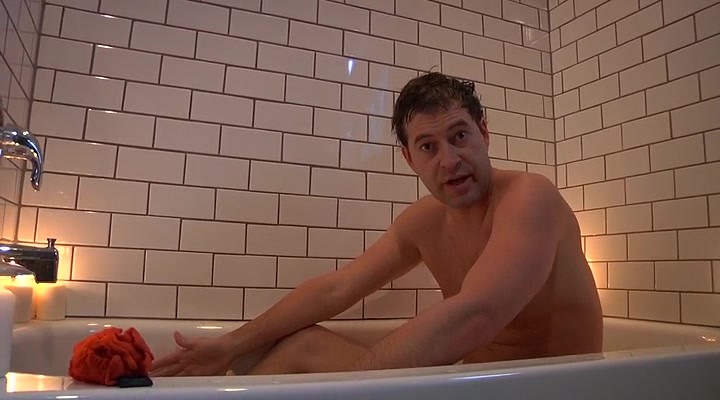 On the positive side, the film’s use of the “found footage” conceit is largely uneventful, yet technically proficient. The film lacks that juddery, shaking, awfully vertiginous action-hackery so prevalent in modern examples of the genre, and for the majority of the movie I was pleasantly surprised at just how smooth and effortless the end product was. The way Brice uses the camera naturally, as if he’s actually documenting things rather than just pointing and shooting because he can, gives the movie a sense reality that only aides the thin story. Sound design is also appropriately “camera-ish”, but has more than enough deep thuds and ratcheting digital crackles to elicit vague skin prickles here and there.

Creep is supposedly the first of a planned trilogy – the conclusion certainly pertains to a lengthy franchise should the box-office continue to allow it – but as an opening salvo I spent more time clutching my armrest with frustrated annoyance at Aaron than I did at any of the film’s scattered visceral thrills. In the film’s favour, it’s just over an hour long, so if, like me, you don’t really find it that “horrific” or “terrifying”, then you can simply zone out for a bit and it’ll all be over soon. Perhaps I’m finally over the found-footage motif to the point where I’m now numb to any new ideas in this genre.