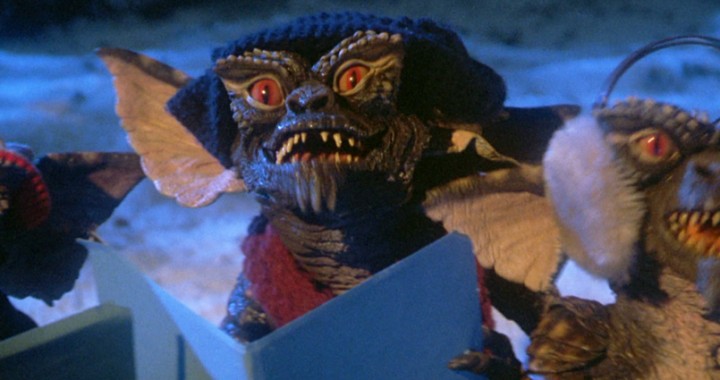 Gremlins represents another of the triumvirate of mid-80’s films to reach such a revered status that their reputation precedes them in virtually every discussion about them. Consider Gremlins, together with The Goonies and The Neverending Story, three films in which kids form the core narrative arc and provide a sense of empathy from the audience (who, by and large, were kids for those films) and allowed an emotional attachment to each movie that, to my mind, remains as strong now as it did on first watch. Gremlins‘ Christmas-centric storyline and aprocraphyl nightmarish scenario, scattered with vast lumps of charm and humor, as well as the typically genre-specific manner in which adults “know nothing” and kids “know everything” to do with the plot, make this a formidable film to approach from a latter-day critique perspective. 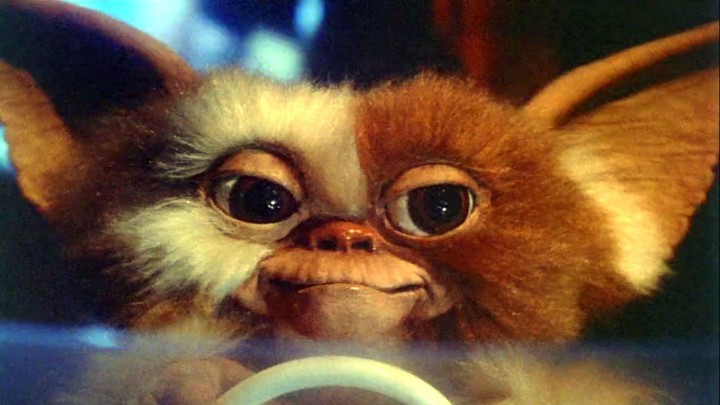 Gen Y kids will have an affinity to this film unlike almost any other. The story of young Billy Beltzer, a small-town-USA kid trying to make his way up the “corporate ladder” of his local bank, trying to keep his family together for the holiday season, and eventually trying to keep his town from burning to the ground following the titular monsters’ arrival, is a tale of innocence lost and adulthood found – although Billy is somewhat older than the kids of The Goonies or Neverending Story, he’s still a kid at heart – and it’s this aspect that makes revisiting Gremlins so appealing. Peltzer (Zach Galligan) has a father (Hoyt Axton) who travels a lot as a salesman, and upon returning home for Christmas, brings Billy an unusual present in the form of Gizmo (voiced by, if you can believe it, Howie Mandel, a fact I didn’t know until researching this review), a Mogwai with whom three rules of ownership apply. Never allow sunlight or bright light to hit the animal, for sunlight will kill it. Never get it wet. And most importantly, never ever, ever, ever, feed it after midnight.

Naturally, all three of these rules are broken through the course of the film, as the water attribute allows the Mowai to breed (almost instantly), and the feeding past midnight causes the creatures to transition, butterfly-like, into horrific, violent, evil monsters (the gremlins, if you will). Billy’s love interest (and mine, if I’m honest), is Phoebe Cates as Kate, one of his workmates and the first person he confides in following the Mogwai’s surprise increase in numbers. As Billy struggles with deciding what to do with Gizmo’s unwanted offspring, who then become the hideous gremlins that run amok through the town, destroying property and causing untold (and unseen) death and destruction, he and Kate end up in a showdown with the creatures at the local cinema (in one of the film’s most memorable scenes) before Gizmo, Billy and the gremlin leader, Stripe (voiced by Frank Welker, better known as the voice of Starscream in the Transformers movies, and the voice of Megatron in the original Transformers television series) face off inside an empty department store. 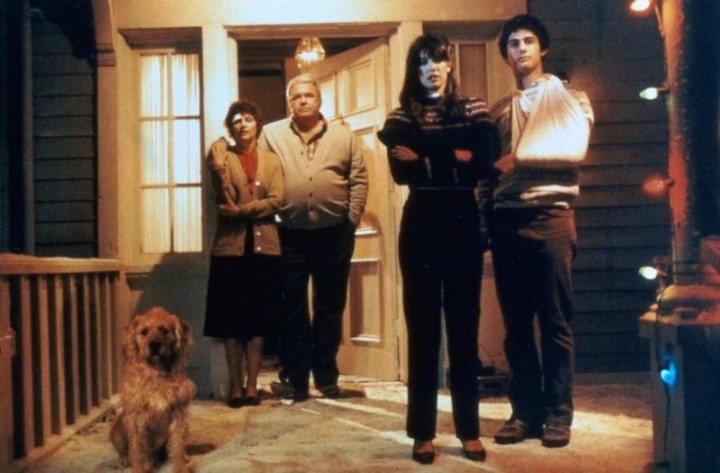 Director Joe Dante had come to Gremlins off the back of success with film and television; his early horror film Piranha is considered a cult classic, while The Howling is lesser known but just as interesting a watch. He had co-directed parts of The Twilight Zone movie with Spielberg, John Landis and George Miller, before Gremlins came along. Gremlins came along at a time when kids-as-heroes films were enjoying something of a resurgence, a period in the mid-80’s when this kind of Spielbergian tone was prominent in a large majority of films of the era. Written by future Harry Potter director Chris Columbus, Gremlins‘ dark urgency contrasted wonderfully well against the backdrop of middle-American Christmas cheer and magic, while the legendary Chris Walas would create the puppets used as the Mogwai and Gremlin creatures. The film’s nightmarish sensibilities fit well with Dante’s ironic humor, a kind of edgy family-friendliness that pervades the film throughout much of its screen time.

As a child, much of Gremlins is of a kind of violence associated with the old Warner Brothers Looney Toons. From Gizmo’s “birthing” scene, in which a half-dozen other Mogwai are given life, to the final chainsaw-wielding frantic hysteria of the film’s closing act, Gremlins is to plush toys what the face-melting sequence in Raiders Of The Lost Ark was to Christian mythology – that is, the very antithesis of the thing. There’s a decidedly mean undercurrent to the film, not overt but gently laid beneath Billy Peltzer’s gee-whizz attitude and Phoebe Cate’s now memorable “chimney” story (seriously, the film’s most memorable non-Gremlin moment, and one so awesome they referenced it in the sequel) to give the menace and realism of sadistic puppets a little more weight. 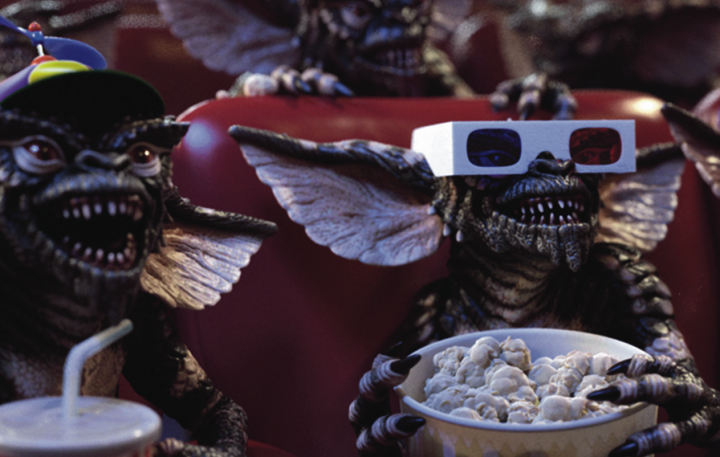 The brilliant thing about Gremlins is that it was made in the early 80’s. Were Gremlins to be made today, it’s entirely possible the creatures themselves would be created wholly inside a computer; part of Gremlins‘ charm is that the effects are entirely practical. The creatures are entirely performed in-camera, on set, by actual people, and while they do seem antiquated by today’s modern standards, because they’re real they remain so visceral and alive within our imaginations. The tech behind them might have aged, but the characters have not, not a bit. Modern film-makers could learn a lesson from artistry and craftsmanship such as that witnessed on Gremlins. I won’t harp, but if only George Lucas had re-watched Gremlins prior to making his CG-filled prequel Star Wars films. If only. Gremlins is the reason people want to go to the movies. CG is not.

The cast spend an awful lot of time reacting to things. Billy and Kate aside, the film isn’t particularly deep with character development – the odious Mrs Deagle (the brilliant Polly Holliday) meets her end in the most awfully funny way, and Holliday gives the part the spectacularly “old-woman-bitch” brilliance the film needed to kick off, while Billy’s effusive neighbors, the Futtermans, are given lovely gregariousness by Dick Miller and the wonderful Jackie Joseph, while Billy’s mother (a lovely Frances Lee McCain) and father (Hoyt Axton, in brisk paternal mode) add contrast to the film’s youth-centered angst. I’d also totally forgotten that Corey Feldman (who would also appear in Stand By Me and The Goonies) was in this, and he’s in it as an expository mechanism to propel the narrative. But it’s Zach Galligan and Phoebe Cates who give Gremlins its relatability. They’re eponymous cinema heroes; unassuming, flawed, resolute and charming, and their screen chemistry is palpable. They make a great pairing. 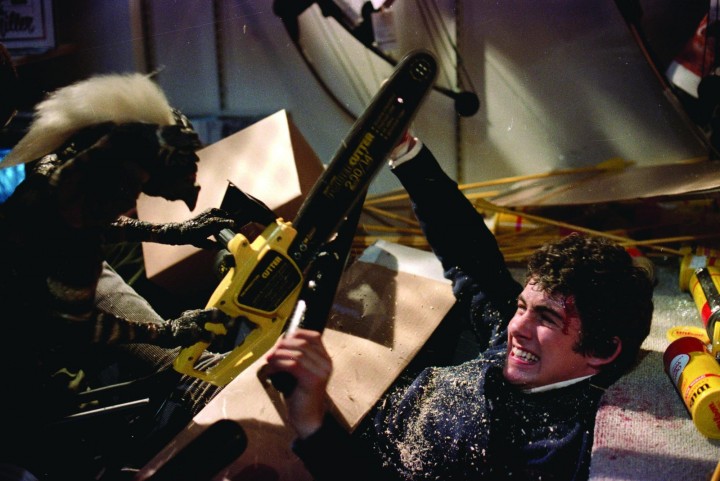 But it’s Dante’s direction and the Gremlin’s performances that sell the film. The violent, subversive humor is actually quite meta, with multiple pop-culture references and a sense of showmanship giving these awful creatures the menace and mayhem needed to sell the danger in the film. The film runs as a counter to the more family-friendly Muppets, the Kermit and Gonzo humor given a near X-rated sense of entitlement by comparison (there’s no sex in this film, but plenty of sly entendres and asides made by the Gremlins themselves, to the point where one of them cross-dresses….) and where subversive cruelty isn’t particularly inviting, Dante makes it work through humor, a deadpan humor that gives the film momentum and impactfulness. From its It’s A Wonderful Life motif early in the film to it’s echoes of The Blob (both films are name-checked via the Peltzer family televisions), Gremlins is a film that doesn’t take a swift left-turn midway through as much as it pretty much tells you it’s going to swerve all over the place before the end credits roll.

It’s unsurprising that Gremlins transitions from a fairly genteel family-friendly light-comedy into an outright PG-horror film, given Joe Dante’s history with the genre. It’s this bait-and-switch that gives the film its edge, gives it a sense of purpose as things slowly, malevolently, become darker in both tone and stakes. With a terrific cast doing great work, and sublime use of practical effects that remain effective even now, Gremlins is one of the definitive 80’s films that launched a thousand child nightmares, and a thousand child “I-wanna-be-a-filmmaker” stories. Unassailably great, Gremlins remains a defining memory of my childhood, and a film deserving of a wider audience in this modern era.