Basically, douchebag teenagers get their asses handed to them by a ghost. As much as I’m a fan of found footage films, and by-and-large I am, The Gallows just annoyed me. Tepid romantic overtones, a tragic backstory and typically hyperbolic camerawork project a distinct malaise over what could have been a legitimately freaky, creepy movie; alas, The Gallows hangs itself on ineptitude. If your mileage for this kind of scary film is limited, there’s little I can do to convert you with this film’s juvenile character work, because it becomes tiresome quickly – the “camera” is operated by Ryan (Ryan Shoos), a class-A asshat who hates having to do his mandatory drama class, so his constant, repetitive antagonism towards his classmates might seem “cool”, but it’s largely stupid. 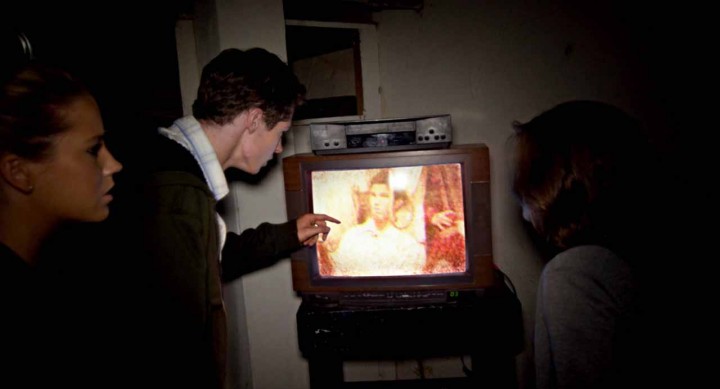 In October of 1993, a school performance of “The Gallows” goes horribly wrong for Charlie Grimille after he is hanged and dies in an accident on performance night. 20 years later, the drama students of Beatrice High decide to stage the play again, as a tribute to the tragedy. Leading man (and ex-football team member) Reese (Reese Mishler) has a crush on leading lady Pfeifer (Pfeifer Brown), while Reese’s friend Ryan jumps at the chance to ruin the production by sabotaging the set the night before the performance. Reese and Ryan, together with Ryan’s girlfriend Cassidy (Cassidy Gifford), and latecomer Pfeifer, become trapped inside the school, and slowly come to realize that the ghost of young Charlie might not be entirely absent from the premises. Oh, and for some reason, the school seems to be in the worlds largest cell-phone service blackspot. Grrr.

Predictable jump-scares and energetic sound design have long been the bane of my experiences with “found footage”. The Gallows delivers all of that in spades, a furiously aural exercise in spectral poltergeisting that, for the first few moments works kinda well-ish. However, the insipid characters, none of which feel particularly well developed (in spite of a teen-love plot device) and the utter stupidity of them (okay, they’re teenagers, so I guess you can give them some latitude to underdeveloped maturity) begins to grate the longer the film progresses. Key to the gormless nature of the film’s narrative is Ryan Shoos, a poor schlep directed to act in the most obnoxious, arrogant, heartless, inane manner possible throughout the entirety, and damn I wanted to throw something at the screen by about 30 minutes in. And only at him. 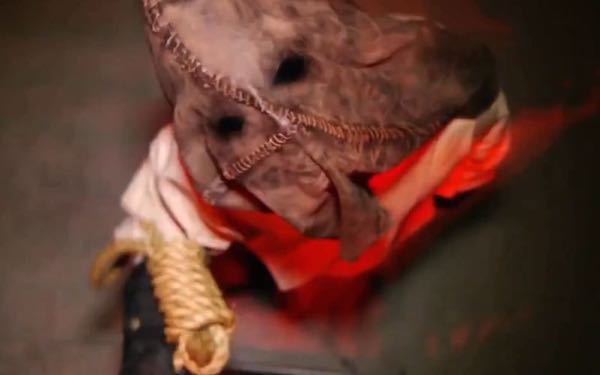 The Gallows’ gallows humor (ha) is derived from the thoroughly creepy idea that a school play caused the death of a student, and that somehow that entity hasn’t crossed over and continues to haunt the auditorium. Naturally, when the titular gallows prop is constructed, it somehow becomes a pivot on which the spooky events of the night revolve, although the exact methodology of the ghost isn’t exactly clear. Once people start dying, though, logic (what little there was) goes right out the window. The screenplay comes from the directors, Travis Cluff and Chris Lofing, who try hard to reduce the film’s inadequacies by maintaining a breathless pace, in spite of narrative shallowness. They work with the characters as they are, a middling set of generic players against a backdrop of dark corridors, sudden crash-bang foley and a bunch of screaming, discombobulating actors all trying to give this inert story some manner of weight.

Indifferent as I am to The Gallows overall, it isn’t without some spooky scares. After all, they’re inside a cavernous, darkened school auditorium, which provides ample opportunity for plenty of dark corners and jump-from-the-darkness scares. But the film doesn’t really earn those scares beyond simple parlor tricks of sound design and the found-footage genre’s usual shtick of panning across a figure before it disappears (you know, the Blair Witch motif) on second look. The film uses mild and significant bass amplitudes to denote something creepy is about to happen, so forewarning is also part of the film’s grand plans to creep you out. As it builds towards its equally traumatic conclusion (will anyone survive this film?) the film becomes increasingly reliant on these cues, and after a while the quiet-build-to-outlandish-bang routine becomes tiresome.

The Gallows probably works for a number of susceptible genre fans who delight in a crash-bang audio mix and decent surround sound. As a straight-up narrative its really rather piss-poor, what with inane characters and an over-reliance on screaming and fidgety focus-pulling to generate thrills. With a “presence” that fulfills only the most basic cinematic creative purposes, a blessedly brief 80 minute runtime, and a premise that’s hardly unique or refreshing, The Gallows is all flash and dash, and very little honesty. If you need to, turn it up and turn out the lights, but if you have anything else to do, you can probably skip it.