Director :   Francois Girard
Year Of Release :  2014
Principal Cast :  Dustin Hoffman, Kathy Bates, Debra Winger, Garrett Wareing, Eddie Izzard, Kevin McHale, Josh Lucas, Joe West, River Alexander, Grant Venable.
Approx Running Time :   103 Minutes
Synopsis:   Stet, a troubled and angry 11-year-old orphan from a small Texas town, ends up at a Boy Choir school back East after the death of his single mom. Completely out of his element, he finds himself in a battle of wills with a demanding Choir Master who recognizes a unique talent in this young boy as he pushes him to discover his creative heart and soul in music.

The DVD cover for this movie had a critic blurb stating “Hoffman is flawless”. It’s a shame the film as a whole can’t muster up similar sentiment: Boychoir is a vacuous, uneven, unsure-of-itself story that’s either a coming-of-age fable, or some manner of rebel-makes-good narrative – or, as is most likely, a confusing mixture of the two. Although led by Garrett Wareing, who might be able to sing but can barely act at all, Boychoir’s central conceit about a kid from the wrong side of the tracks making good in a world he’s not supposed to be in is predictable, generic, and underwhelming, to say the least. 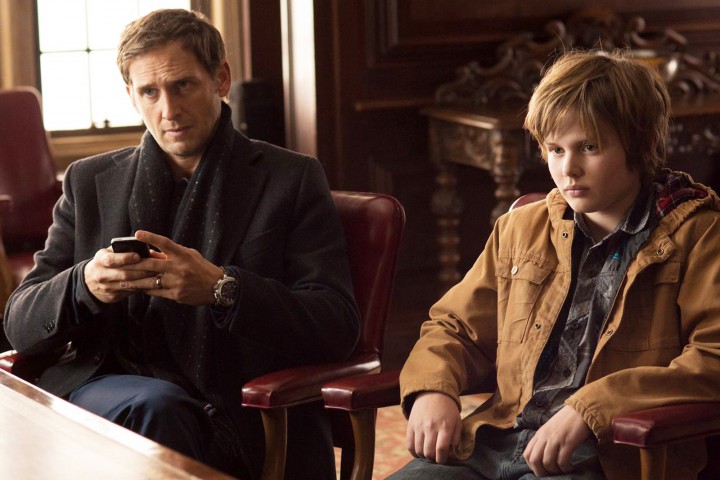 Wareing plays the conspicuously named Stet (he gets nicknamed Stetson later in the film, which must have made the writer laugh, but nobody else), a kid from a dysfunctional home life suddenly orphaned and sent to an exclusive musical singing choir-college by his illegitimate father (Josh Lucas), who wants to keep the knowledge of his existence a secret from his other family. Stet, being the rebel he is, initially is reluctant to participate in the college’s classes, although his former schoolteacher, Ms Steel (Debra Winger) and some of the college’s faculty – namely Glee’s Kevin McHale and school dean, Kathy Bates – think he has some talent. Unfortunately, chief musical leader Mr Carvelle (Dustin Hoffman) doesn’t think Stet has what it takes, and starts to tear him down. Stete’s inbuilt sense of combat assures he doesn’t take this lightly, and so the battle of singing wits begins.

Boychoir is one of those films that sounds good as a pitch (if somewhat generic), and probably read well as a script, but comes apart under Francois Girard’s unenthused and middling direction. As a school-bound film about young lads, you kinda get a sense of Dead Poets Society combined with boys choir youthfulness, although with a decided lack of focus on both character and story, the film buckles under the dead weight of ineptitude. As mentioned, Wareing sounds good as a singer (and man, the moment when we hear the titular choir in full voice is magnificent, i just wish there was more of it!) but he’s no actor, and the film’s use of him in almost every scene is telling for every second he’s forced to look confused, angry, happy, destitute or some combo of them all. Wareing isn’t good enough to carry the weight of the film’s emotional requirements, least-ways not against the likes of Kathy Bates and Dustin Hoffman. 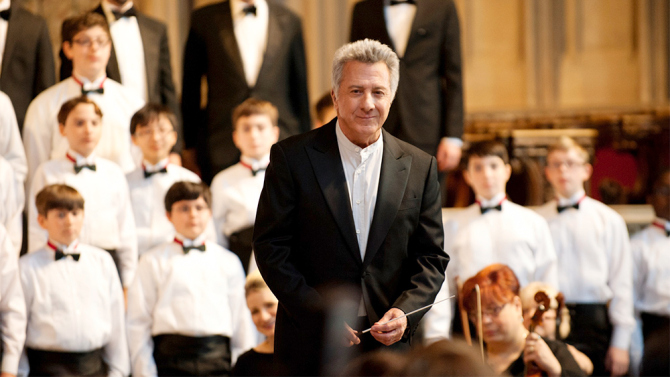 Bates seems to have taken this role on as a paycheck job, while Hoffman imbues his character, the irascible Carvelle, with way more nuance than the film could ever hope to satisfy for the audience – yes, the bespoke review grab is right, in that he’s solid and commands every scene he’s in, but Mr Holland’s Opus this is not. Hoffman’s role is ill-defined, lacks genuine motivation, and is confusing as to his state of mind – the inevitable about-face in his relationship with Stet is never built upon as anything other than a script requirement. Supporting roles to Eddie Izzard, as another faculty member, and McHale as a vocal coach for the students, provide the film with a sense of thespian width, but offer little dramatic counterweight. One of the young boys, Devon (played by Joe West) is your typical “child prodigy” arrogant asshat, with the film’s thin script offering little by way of development in this aspect other than to be an antagonist towards Stet’s journey. As it is, most of the other young actors are far better than Wareing anyway, so I would say “miscast” is an adequate label to bandy about.

Boychoir feels like a musical Frankenstein’s Monster of sing-song movies. Almost without a single original bone in its anemic narrative body, Boychoir’s sodden, overwrought plot points and shaky, nonsensical character beats – Josh Lucas’ role as Stet’s biological father canons into the film with the finesse of an asteroid – and utter waste of what is a really great cast, is disappointing. For fans of Hoffman, and that’s about it.