I’m guilty of all seven.

Following his acrimonious experiences with 20th Century Fox making Alien 3, David Fincher spent nearly 18 months in the directorial wilderness, unsure if he’d ever direct again. After being sent the screenplay for Se7en, the lure to helm the crime thriller proved too strong, and Fincher signed up alongside Morgan Freeman and Brad Pitt for the film that would send the young director’s career stratospheric. Immediately iconic, Se7en has similar cult standing to M Night Shyamalan’s debut with The Sixth Sense – that is, it’s become synonymous with Fincher’s acute style and ice-cool visual motifs – and gave us one of the most gut-wrenching final scenes in Hollywood history. Brooding, unflinchingly violent, fueled by Freeman’s circumspect old-timer-detective role played to perfection, Se7en remains the darkest of Fincher’s films and, with the possible exception of Fight Club, his most thematically dense.

Spoilers for this film are discussed within. 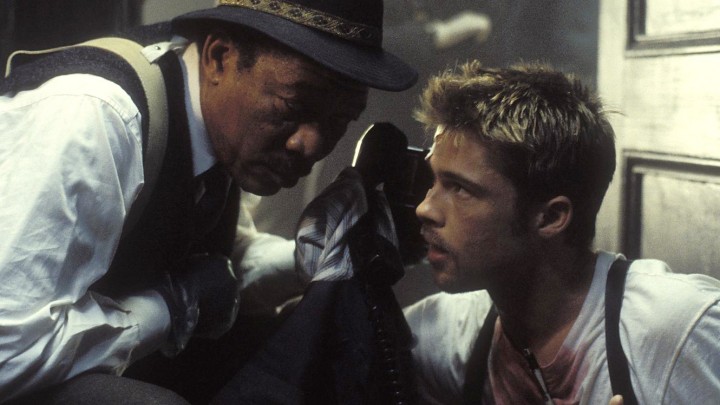 If you strip away all the dank, depressing melancholy, Se7en is a fairly straight-forward crime-psych-thriller, the kind of film they’d have made in the 70’s and had Robert Redford star in. The premise, in which a serial killer, John Doe (Kevin Spacey), uses the seven deadly sins – lust, sloth, gluttony, greed, wrath, envy and pride – to commit atrocities to carry out his “masterwork”, and who is investigated by soon-to-retire Detective Somerset (Freeman) and recently transferred idealist Detective Mills (Pitt), runs as an elaborate game of cat-and-mouse that, when it’s not dwelling in human depravity, is delightfully intelligent. Mills’ wife, the stick insect people refer to as Gwyneth Paltrow – her character’s name is Tracy – exists as both a foundation for character development and a deux ex machina, in the film’s infamously horrifying conclusion.

Made for a paltry $33million, Se7en swept all before it as one of the big box-office draws of 1995 – not bad for a film in which people are eviscerated, garroted, slit and starved in graphic, brutal detail. The commercial aspects of the film obviously pale into insignificance when compared with the film’s status as one of modern Hollywood’s most surprising, gut-wrenching movies, told with a virtuoso hand by Fincher, from a script by Andrew Kevin Waller. The “buddy cop” motif isn’t new, nor is it particularly edifying in and of themselves; rather the film’s subtle, slow-cresting wave approach to the characters is indicative of the complexity of development the actors bring to the table. 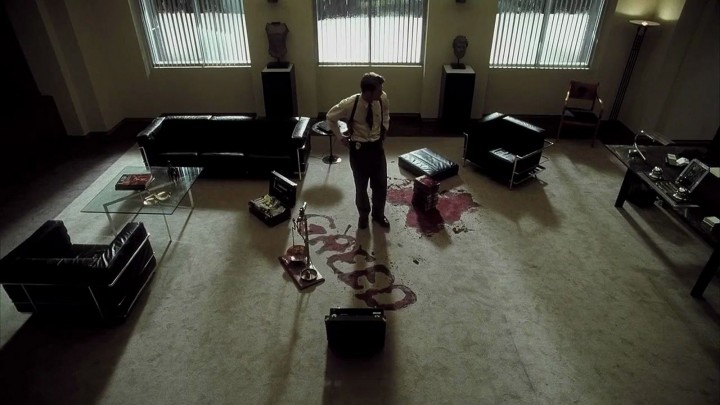 Somerset, the older, somewhat jaded – decidedly circumspect – detective, is methodical, rhythmic, and intricate, both as a person and within his actions. Morgan Freeman’s dulcet tones appropriate the character’s reserved, quiet manner, while his dedication to the work, the job, is never in doubt. Brad Pitt’s hot-tempered Mills, contrasting Somerset, is a powderkeg of post-modern rage and presumption of guilt; he’s an early template for Fincher’s later work on Fight Club’s Tyler Durden, perhaps apropos played by the same actor. Pitt, still relatively new to cinema at this point (his breakout role in Thelma & Louise came in 1991, and his first major blockbuster was 1994’s Legends of the Fall) delivers a performance filled with his devilishly handsome tics and provenance; Pitt’s always seemed a “full throttle” actor – he’s either all go, or laid back – and Se7en has him in full adrenaline mode. Against Freeman, he’s a great match, although the older actor runs rings around him for nuance and subtlety.

Gwyneth Paltrow’s role as Tracy is to balance Mills’ hard-headed desire to close a case and his family life, a life which Somerset sees as something of a luxury in their line of work. Tracy’s use of Somerset as a confidant, whereby she reveals her til-then pregnancy from her husband, is one of the better moments of quiet in an otherwise emotionally shattering movie. Although she’s in the film in smaller amounts, Tracy’s arc within the context of John Doe’s excruciating plan of death is juxtaposed between innocence and outright horror. The final scene, which sees Doe’s final atrocity committed by Mills after he discovers Tracy’s head in a box, is both heartbreakingly justified and emotionally obliterating, one of the genuinely gasp-worthy moments in cinema history; Fincher’s refusal to cull this in favor of a more traditional or commercially safe ending is tremendously gratifying considering the problems he faced on his debut feature two years prior. Se7en is dark: the story is thick with menace and human tragedy, the kind of story that, while incredibly fantastical in examination, is largely believable considering the sickos who exist in our world today. 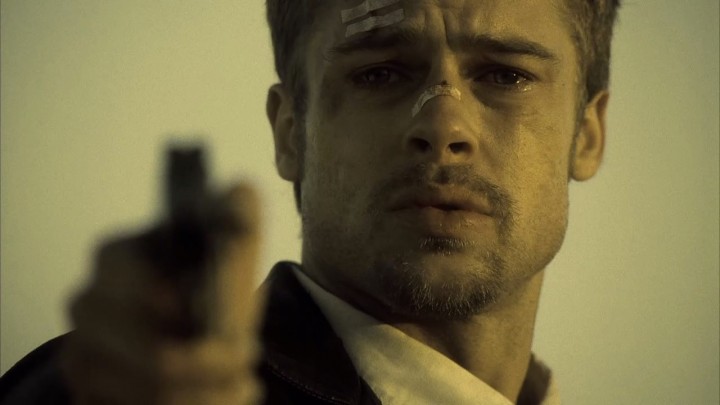 Fincher’s work here, in terms of visual style and pulsing, resonating emotional heft, is terrific. The former music video director has a huge swag of visual tricks to play with, and he uses them all in ways that do nought but enhance the story; Fincher’s depressing, mournful city-scape is a character unto itself, catapulting the audience into the nightmare of John Doe’s victims and plan without restraint or escape. It’s a journey into madness, this film, handled with expert use of the camera and sublime editing. A key moment, where a group of police discover the motionless body of a man believed to have starved to death – only to find he’s still alive! – is insidiously creepy, the kind of thing you get skin-prickles just thinking about, and each of the plot’s “seven deadly sins” is masterfully executed (pardon the pun). Although Fincher’s style would change between Panic Room and Zodiac, to become less hyperbolic, Se7en is a full-blown masterclass in both plot, character and visual acuity.

Haunting in conclusion, with Brad Pitt’s desperate screams asking “What’s in the box?” and the hollow, certifiably justified bloody ending, give Se7en a power that holds to this very day. I doubt there’s an audience member who isn’t affected by the film’s gut-punch ending, and although there’s two hours of film before it that is worth examining, it’s the ending, and the journey to it, that people keep in their mind’s eye. Se7en tacitly asks the question of wrath, the rage-filled decision by Mills to avenge his murdered wife, as a sidebar to the central themes of the film; what would you do in a similar position? Cinema is often used to ask the tough questions, and while it doesn’t give us the answer, Se7en gives us an answer, in one searingly powerful way. Pitt and Freeman are aided superbly by an uncredited Kevin Spacey (Fincher wanted to keep the surprise of his appearance from the audience as long as possible) who is just the creepiest, cruelest, most evil serial killer type to grace the screens since Hannibal Lecter in Silence Of The Lambs.

Now that I think of it, Se7en owes a lot to Lambs’ realistic depiction of human evil; although it’s its own film, Se7en’s ascension into the Hollywood pantheon rides on our ability to acclimate to the dark, vile tones Fincher imbues his film, and the twisting, elegiac plot that will ruin your night if you give it a watch. Desperately impactful, undeniably atmospheric, Se7en remains the best of all Fincher’s fine work – possibly only bested by Fight Club.