“It’s funny how the colors of the real world only seem really real when you viddy them on the screen.”

It kinda makes a point about success when you look at Kubrick trying to follow up his gargantuan cult classic, 2001: A Space Odyssey, that he chooses hugely controversial novel (by Anthony Burgess) as his next project. I mean, only Kubrick could have got away with it. To wit, Burgess’ book was accompanied by the removal of a “redemptive chapter” for the US publication (the publishers wanted the book to end on a darker note), as well as being outright banned in some quarters for offensive language; I guess it was only natural for a film-maker of Stanley Kubrick’s stature to even attempt to make a mainstream film out of it. The end result of it is that Clockwork remains one of Kubrick’s most divisive films, at least in terms of its imagery and counter-cultural narrative, which portrays “the establishment” as cruel and unusual – or perhaps just misguided – while attempting to create a villainous character into a heroic, albeit demonic, one. The film was so controversial in both the UK and the US, particularly for its sex scenes and depictions of sexual violence, it was either trimmed or banned altogether in those markets. Kubrick famously withdrew the film from being available to the public in the UK, a decision which was only lifted following the director’s death in 1999. 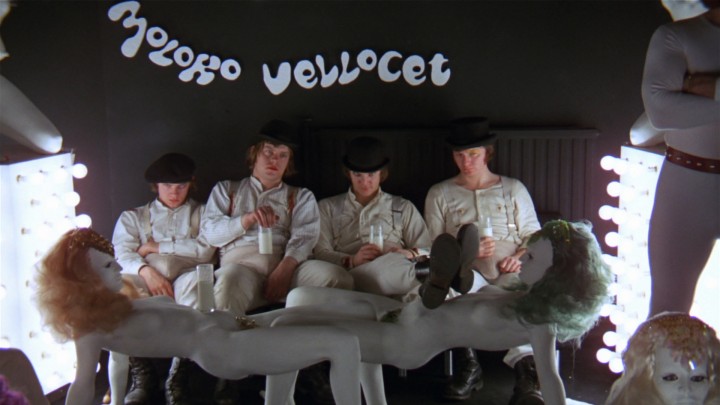 Alex DeLarge (Malcolm McDowell) is a young gang leader in a futuristic, dystopian London. He frequently engages in acts of extreme violence, both sexual and physical. After being imprisoned for the savage rape and murder of a woman, Alex is remanded to prison, where he undergoes psychotherapy to try and reverse his anarchic, aggressive impulses. Although it is deemed to go against the concept of “free will”, Alex’s treatment renders him unable to carry out any acts of violence at all; at least, until he is inadvertently found by one of his past victims, and the mental brainwashing begins to wear off.

The first time I saw A Clockwork Orange, it was in an old Adelaide cinema, the Academy, in a boxy old auditorium probably built in the 30’s, with torn, horrid cushioned flip-up seats, terrible projection and frankly awful “digital sound”. It was about 2000 or 2001, I remember, because it was the first time the film had become available to re-screen following Kubrick’s passing a year or so earlier. Having never seen the film, but aware of its chequered history, I scuttled along with a friend and prepared myself to be thoroughly controversialized. But at the end, I had the distinct feeling of “so, was that it?”. Sure, Clockwork is violent, and has moments that make you cringe a little, but it’s no less violent than much of what’s on our screens these days, often masquerading as reality television. Alex’s “ultra-violence”, a term coined by the character to nonchalantly describe his actively seeking out people to rape and destroy, was merely violent, and even now you’d be hard pressed to think of much of what transpires any worse than a given episode of NCIS or CSI. 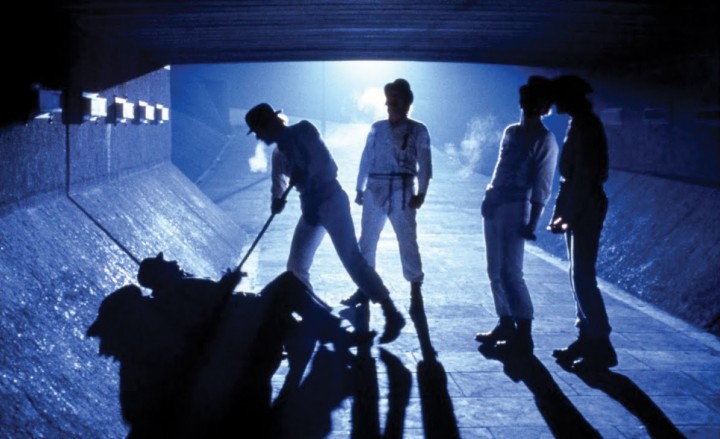 Contextually, A Clockwork Orange is especially violent, for it depicts extreme acts of brutality towards women that would have been considered impossible to allow on a screen anywhere, least of all for mass public consumption. Alex’s sexual dalliances (sped up and set to Beethoven, if you can believe it) are equally black in humor, for Kubrick’s keen eye observing the utter failing of the human condition as something to laugh at, perhaps recoil in horror while chuckling, and he transposed that feeling onto the screen with precision. Now that I’m a little more mature in my appreciation for film, particularly older films where things like subtext and entendre was required to slip past censors, it’s great to see a film that basically gave the middle finger to the pious bigots who only saw “art” as something hanging in a gallery; apparently, human violence and nudity, even in a film as rancorously divisive as Clockwork was intended to be, couldn’t be considered an “artform” of any kind, and thus the film met with staunch opposition upon release. I mean, it’s easy to see why.

Where the film really lets fly with its punches is not so much the vile acts perpetrated by Alex and his fellow droogs (the slang term he uses for his gang members) but rather the methodical recalibration of his brain through science; a technique invented by Kubrick for the film, by which the subject is injected with drugs designed to make him nauseous or paralytic, and coupled with horrific, violent imagery, would supposedly make him virtually suicidal at the mere thought of committing violence against anyone. 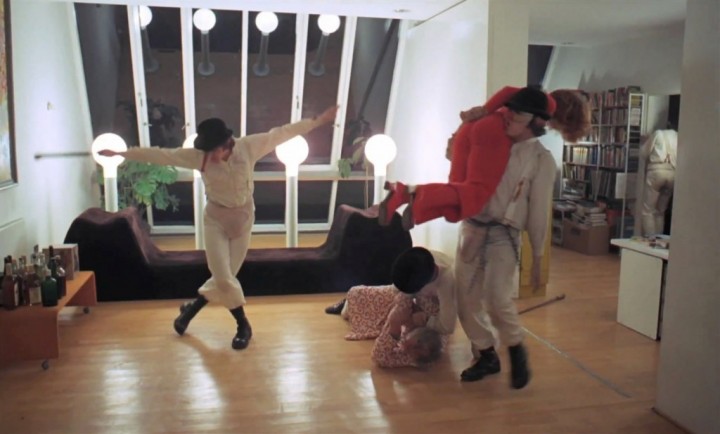 The sequence in which McDowell has his eyes forcibly opened, and held in place by a metal contraption which approached a method of torture, while having to view the most horrendous footage 1970’s film-making could supply, etched itself into pop-culture as an iconic visual touchstone for non-conformist retrofitting, and alluded to in The Simpsons (so you know it’s iconic). This sequence is hard to watch, mainly because Kubrick and McDowell shot it for real, without effects or anything, so the actor’s uncomfortable twitching and reactions were genuine.

The subtext of cause and effect, and the modus operandi for trying to prevent criminal recidivism, was of great impact in Clockwork’s brutally savage indictment on both crime and law enforcement. I don’t think Kubrick leans one way or the other in terms of making a statement about it, rather he’s willing to let us draw our own conclusions. The film’s statement on violence have spawned countless inches of articles dissecting the nature of Kubrick’s film, from subtextual standpoints on humanity’s appetite for sexualised violence, to just “for the hell of it” acts of wanton cruelty, among others. A Clockwork Orange is a confronting film even today, given our violence-saturated news and media, but contextually it’s more shocking than what we might even see on the 6 o’Clock broadcast. 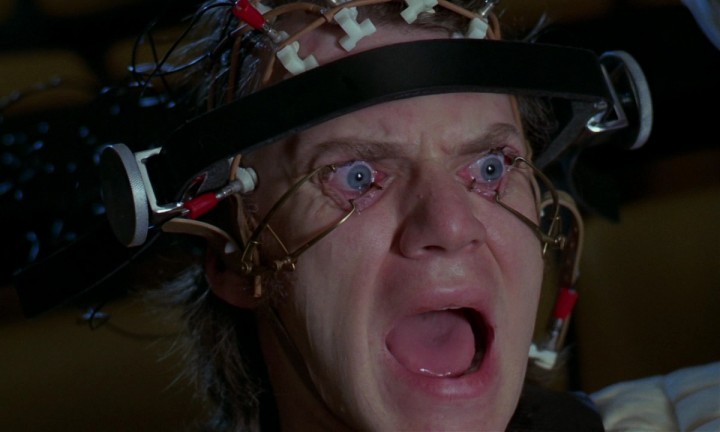 With a lead actor at the very height of his “fearless” phase, Malcolm McDowell delivers Kubrick’s anarchistic vision with vivid tenacity and snarky wit; he makes a great sympathetic villain, albeit slightly comedic to offset the diffuse violence he delivers throughout the story. McDowell’s abetted by a cast of terrific veteran actors, in supporting roles that don’t really stand out as much as they round out the world Kubrick is trying to create. Sharp eyed viewers might spot future Darth Vader, David Prowse, as a prison official, late in the movie. Nobody puts a foot wrong, here; the film’s off-kilter humor, it’s black violence and fathomless repercussive narrative work in harmonious eclectic symphony, a deliriously hyperkinetic examination of then-populist anarchy association and the limits to which society might, should, or could go, in the treatment of criminality.

A Clockwork Orange is still hugely divisive, still magnificently operatic. Kubrick’s sense of humor is never clearer (in my opinion) than this film and Dr Strangelove, and the ubiquitous parallel-universe aspects of the film bring greater weight in the sense that it’s a “could be” film rather than anything else. I still find enjoyment in many aspects of A Clockwork Orange, for both as a story, and as a film, it works on many interesting levels.