Director :  Quentin Tarantino
Year Of Release :   2003
Principal Cast :  Uma Thurman, David Carradine, Lucy Liu, Vivica A Fox, Michael Madsen, Daryl Hannah, Julie Dreyfuss, Sonny Chiba, Chiaki Kuriyama, Gordon Liu, Michael Parks, Michael Bowen.
Approx Running Time :   111 Minutes
Synopsis:   The Bride wakens from a four-year coma. The child she carried in her womb is gone. Now she must wreak vengeance on the team of assassins who betrayed her – a team she was once part of.
What we think :  Violent, brutal revenge epic from the master of cinematic storytelling, Quentin Tarantino. Kill Bill’s style almost trumps its story – indeed, characters here are paper thin and devoid of all but the most basic emotive content – and while many may balk at the blood and gore on display, the first chapter in this triumphant splatter-film is an orgy of sound and fury, wrapped up in Tarantino’s visceral style.

Quentin Tarantino’s 4th feature film, part one of the split-in-two Kill Bill project, kicks all kinds of ass. As much as any film in Tarantino’s oeuvre can be, Kill Bill is perhaps his least homage-worthy endeavor, and easily his most passionate project to date. Tarantino’s love-affair with Uma Thurman’s graceful presence on the Hollywood scene continued from their Pulp Fiction work, as the actress personifies the director’s ideal Power Woman, in the vein of Ellen Ripley or Sarah Connor. Kill Bill’s a vanity project, and I guess if we’re calling him out for anything, it’s possibly why he didn’t do it sooner. Violent, excessive, brilliantly executed and technically masterful, there’s few elements of the opening salvo of Kill Bill that don’t work, and even then you’ll be hard pressed to convince me of it anyways. 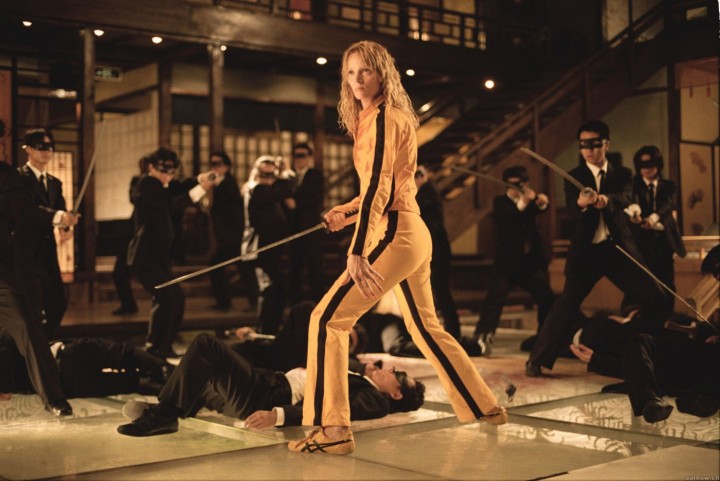 Thurman stars as “The Bride”, a vengeful character who was thought dead (the opening scene involves her being shot), but returns to take revenge on those she blames for the four years of incapacitation she suffered. Not to mention the loss of her unborn child. The Bride makes a list of five people. The first, O’Ren Ishii (Lucy Liu), a Japanese/American assassin, is confronted in a Tokyo restaurant, along with Ishii’s bodyguards and personal army. The second, Vernita Green (Vivica A Fox), an at-home mum who tries to use her four-year old daughter as leverage against the Bride’s mission. The third, Bud (Michael Madsen), another assassin who was present at the betrayal of the Bride which opens the film, as is one-eyed Elle Driver (Daryl Hannah), who tries to poison the Bride while she lies comatose in hospital. Finally, there’s the unseen Bill (David Carradine), the smooth-toned boss of bosses, whose motives for having the Bride “killed” remain unknown.

I’m still staggered that, after only four films, Tarantino pulled off what I think is his greatest scene to-date: the House Of Blue Leaves chapter, in which the Bride fights not only O-Ren but her bodyguards in Gogo (Chiaki Kuriyama) and Johnny Mo (Gordon Liu), and the Crazy 88 (O-Ren’s personal army). Tarantino wasn’t a director known for his “action film” sensibilities, coming off talky dramas like Pulp Fiction, Reservoir Dogs, and Jackie Brown, but he revolutionized himself somewhat with Kill Bill’s modern style and razor-sharp action aesthetic. The massive fight between the Bride and the Crazy 88 still stands as one of the greatest action sequences in modern martial-arts cinema, topped only by recent efforts like The Raid and The Raid 2. Technically, it’s just brilliant, and what makes it even better is that throughout it, Tarantino continues to propel his narrative, even through the spurting blood, the evisceration and the decapitation. Whereas most action films tend to leave the “story” aside when things need to go bang or explode, Tarantino’s command of the cinematic literature is so strong that the characters continue to build, the narrative moves forward, and the dramatic heft of a scene isn’t reduced to accommodate glorified violence.

And let me say this: Kill Bill is all about the glorified violence. As much as I’m inadequately versed on martial art cinema history, there’s a fair chance Tarantino studied up on it here, as his camera sweeps and swoops throughout the House of Blue Leaves as the Bride swings her samurai sword to devastating effect. The mixture of music, gorgeous cinematography and powerful framing are a hallmark of Tarantino’s work here, as they would be in the films to follow (Inglourious Basterds and Django Unchained), while a ten minute animated sequence mid-film, in which O-Ren’s origin is explained, remains one of the most beautifully rendered works of moving picture outside a Disney film, even if it’s as gruesome and hyper-kinetic as the rest of the film.

Tarantino’s cross-cutting of time, with sequences occurring out-of-sequence, as well as his liberal use of violence, are as inspired as ever; the Bride’s brawl with Vernita Green is sweaty, masculine and bloodthirsty, and shocking too, considering a small child is involved. The director handles his camera with panache, mimicking styles from action films and the martial-arts genre and giving them a punchy, immediate potency aided considerably by one of the best uses of sound design a Tarantino film has yet had. Gunshots, punches, knife-hits, door-crunches, flaming cigars and sword-slices are pronounced and thunderous through the surround track, the film enjoying a somewhat “fantastic” element of falsity diametrically opposite to the realism of Pulp Fiction’s gritty tones. Not to mention, QT’s use of music is, as usual, sublime – tracks and cues you never thought to accompany the death notes of a hundred people, or the funky-town vibe of a brutal lounge-room slash-brawl, or the opening stanza or Santa Esmeralda’s “Don’t Let Me Be Misunderstood” to build tension for O-Ren’s final confrontation with the Bride; the film’s aural significance is just superb.

But yes, Kill Bill is a passion piece, a character co-devised by the director and Thurman (on the set of Pulp Fiction, apparently), and Tarantino uses his leading lady in ways I don’t think she’s had to do since. Kill Bill is easily Thurman’s best role, and possibly her best on-screen performance (although the one she gave in Nymphomaniac wasn’t bad, either), for both its physical and emotional demands stretch her range considerably. The Bride isn’t a complex character on the surface: she’s been killed, lost her child, and now seeks revenge, so it’s elegantly simple for audiences to relate. But Thurman gives the Bride an edginess, a sad, almost regretful sorrow to accompany her travels across the blood-spattered screen. Not to mention, Thurman gets to deliver more of Tarantino’s patterful dialogue, a resplendent cobbling of insults, one-liners, gritty anti-hero sentiment and matriarchal irony. 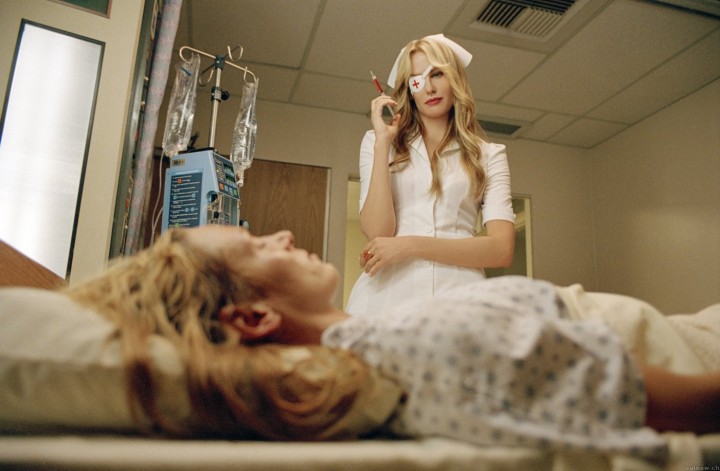 Her main co-stars here are Lucy Liu, as O-Ren, who seems to have a grand time slicing heads and yelling at Asians. Liu’s O-Ren is built up to be this really cool, uber-sexy assassin; I expected her to be a lot more interwoven into the plot as she ended up being, and if I’m honest, her fight with the Bride isn’t quite as fitting as her origin would indicate. Vivcia A Fox handles herself well in a girl-girl brawl with Thurman, and is probably the most emotional part of the film for me (the weight of time and her past catching up to her is elegantly personified by Fox’s on-screen daughter arriving home from school mid-fight), while Daryl Hannah’s brief glimpse of madness, soon to become fully fleshed out in Volume 2, gave me the creeps. And then Bill, the unseen but often heard David Carradine, lords over this film like some bizarrely powerful pimp, his troupe of women doing his bidding and withering at the very sight of him when things go wrong. Carradine’s all style and cool, aided by Tarantino’s refusal to let us glimpse nougat but a hand or a foot (or a handkerchief), but his soft, mellifluous tones reach out of the screen and salve you into submission.

Although it’s only his fourth film, there’s something gleefully childlike about Tarantino’s work here, almost as if he’s laughing at both the audience in a non-patronizing way, and at himself. Probably wondering how he keeps getting paid to make films like this, I guess. Kill Bill was supposed to be a four hour film, but at the behest of Miramax honcho Harvey Weinstein was cut in half – the “cliffhanger” moment will make your eyes open and consider the implications of the Bride’s mission, and works terrifically as a segue into the more talky Volume 2. This film, however, is just dynamite as an action flick, and remains my personal favorite of all Tarantino’s work thus far.