I doubt it would be drawing too long a bow to suggest that the iconic cinematic portrayal of a post-apocalypse world would be the 1979 Australian action thriller, Mad Max. Spawning two immediate sequels, Mad Max 2 (aka The Road Warrior) and Mad Max: Beyond Thunderdome, the batshit crazy world of Max Rockatanski made a star of lead Mel Gibson, and put the Aussie film industry on the map internationally. In the twenty year gap between 1985’s Thunderdome and Fury Road, Miller also directed The Witches Of Eastwick, Lorenzo’s Oil, Babe: Pig In The City, and the eponymous Happy Feet franchise. Along the way he’s also produced, and was at one point only months from shooting a live-action Justice League movie for Warner Bros, before it all fell in a heap. Miller is a director/producer who has a specific vision – look at his films, and you can tell he’s not just cribbing or meandering or taking a paycheck; each of his films mean something, each of his films have a vision that cannot be denied. So to find the director hitting his peak at aged 70, with the release of Fury Road, the fourth bonkers installment of the Mad Max saga, was a crazy mix of justified amazement, and satisfaction. It’s a return to the well, so to speak, that continues to pay dividends, for both Miller and the audience. Minus Mel Gibson, Miller’s modern take on Mad Max returned the crazy world of one man’s loony imaginative fiction, and as it seems everyone is keen to note, blew audiences away. 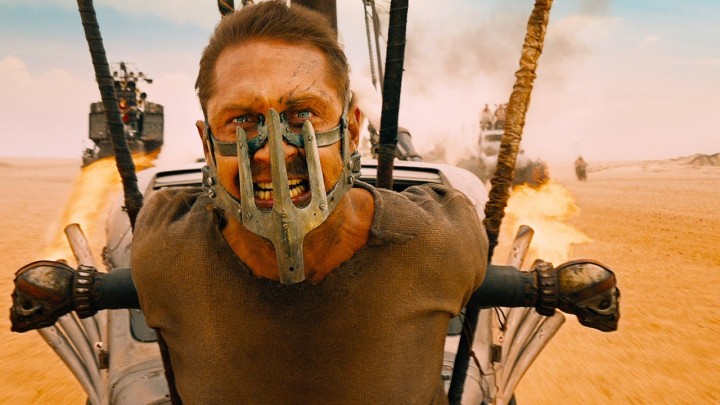 As luck would have it, I recently obtained a rare, highly classified audio tape from the offices of George Miller’s production office (slipped to me in a vat of mother’s milk I ordered after seeing the film). It goes a long way to giving us some insight into the film’s gestation. Below is a transcript of the conversation of the juciest parts.

George Miller:  So, I want to do another Mad Max film.

Producer: Sure George, how about another dancing penguin film instead? They make a shit-ton of money.

Miller: But I badly need to explode everything.

Writer: Look, I’m sure we can put in an exploding car or two.

Miller: And I want to make the leading lady the main character of the movie.

Miller: It’s my f@cking movie, I can do what I want.

Producer: We can’t have Mel Gibson though, that guy’s a liability.

Miller: I have just the guy. Tom Hardy’s one bad-as MOFO.

Writer: Will he speak in an Aussie or American accent?

Miller: F@ck that, he’ll barely speak at all.

Producer: *Sigh* so you thinking about filming this down in Australia again?

Producer: Been raining down there a lot, lately.

Producer: I know a guy who owns a place in Africa.

Miller: Sold. Now, I need to include a couple of things in the film.

Miller: They are called the Five Wives, and they belong to a scary motherf@cker called Immortan Joe, who wants to breed his own race of skeletal junkies.

Miller: ImmorTAN. Listen up man, for f@cks sake. Now, we’ll have Max too, but he’ll be like a secondary character for most of the film to confuse the audience. 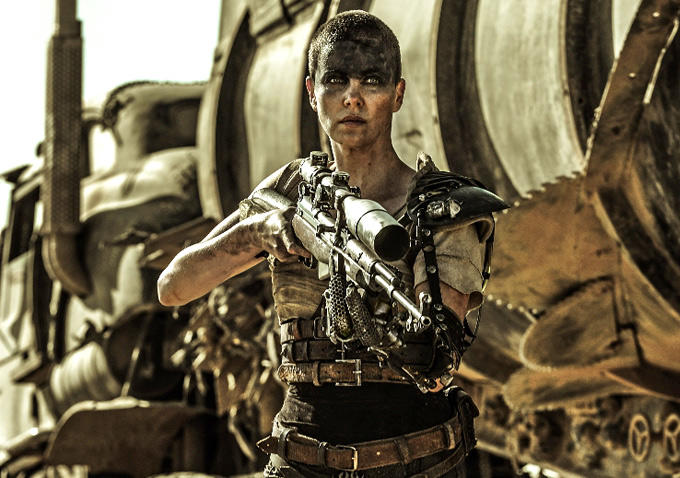 Writer: So who’s the main character?

Miller: That’ll be Imperator Furiosa. She’s an ass kicking truck driving amputee who plays it more like a Tarantino film.

Miller: I know what I’m doing. Nobody f@cked with George Lucas when he came up with shitty names like “Sebulba” and shit.

Miller: And we’ll get that dude from About A Boy to play one of the bad guys who turns good.

Miller: F@ck off man, that kid… he was the Beast in those X-Men circlejerks

Casting Director: Ahh, yes, Kelsey Grammar. I have his number on file.

Miller: F@ck you both. The dude from that stupid Jack & The Beanstalk movie, the one who looks like he’s had people shitting on his hair all his life.

Miller: Yup. And just to f@ck with people, make one of the Five Wives a real supermodel type, you know, like Michael Bay would have in his films.

Casting Director: What about the chick from Transformers? You know, Megan Fox.

Casting Director: What about that Shia Buff kid, she’s popular with the boys.

Producer: That is a boy, you know.

Casting Director: Really? He hid that well, I have to say.

Miller: F@ck all you guys. I want the chick from the one where things explode. She looked good when things exploded. Rosie… somebody.

Casting Director: Okay, I’ll try for her. What do I tell her about the part?

Miller: Tell her she’s gonna be pregnant through it all, but look like she’s partially anorexic. And in the end she’ll have her guts cut open by one of the dudes from those Insidious movies.

Miller: Doesn’t matter, they’ll all be hidden beneath a shitload of makeup and masks. Most of the cast will be near indistinguishable. Just populate the film with a bunch of Aussie actors and shit. And Megan Gale, I owe her for not following up on that Justice League movie when I cast her as Wonder Woman. Now look who they’ve got playing the part!

Writer: So, you thinking a half dozen cars or so, a couple of chases, a bit of lewd salacious body horror?

Miller: Nope. Whole thing is one huge chase movie. There’s gonna be at least fifty or seventy vehicles. And plenty of explosions. In fact, the whole first half of the film will pretty much be one giant explosion.

Writer: ….er…. okay, but how will people get to know the characters if they don’t stop and chit chat for a bit? 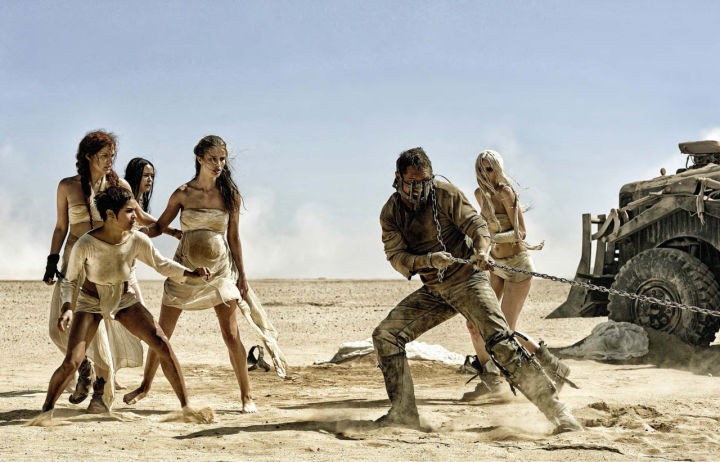 Miller: Have you seen Fast & The Furious? I mean, have you f@cking seen that shit? People will buy into anything as long as it’s going boom all the time.

Producer: George, how about we have, like, three cars, a truck, and a few explosions towards the end, make it all kinda neat and tidy like.

Miller: F@ck you, moron. I’m gonna start the film with Max eating a lizard, a badass car chase and a wreck, and then a scary as f@ck chase between Max and these white dudes until we body slam the opening credits at people. It’ll be intense.

Miller: Then we get Furiosa in a truck, going off mission to save the Five Wives, and ending up on some bizarre cross-country trek to save themselves, only to be chased by every last motherf@cker left alive on Earth. In cars, with flames and shit, and some dude playing a flame-throwing guitar.

Miller: You heard. Some crazy, loopy, f@cked up acid-trip shit that will make people watching think we’re making fun of them. A dude on a truck with one bitchin’ guitar that spouts flames, while he’s accompanied by the dudes from Kodo.

Miller: And we’ll shoot as much for real in camera as we can. Hope those stuntmen all have good life insurance. There’s gonna be some spectacular wrecks!

Writer:  ….I’m not sure this is even English you’re speaking.

Miller: And I also know this little Aussie dude with osteogenesis imperfecta who’d be great as a weird, childlike freak. It’ll look awesome. 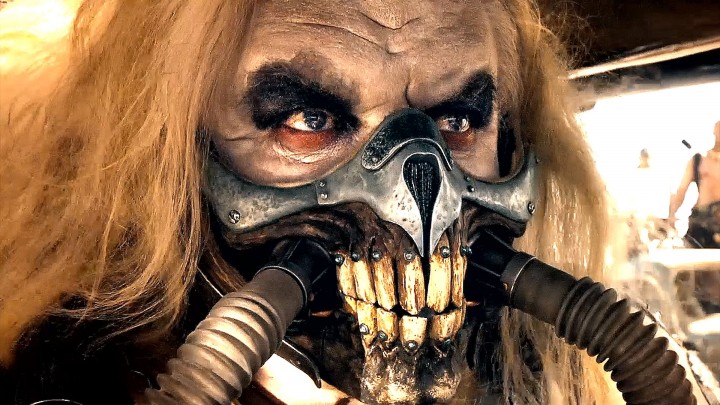 Miller: You never met Quentin Kenihan, did you. He’ll f@ck you up with that attitude. Dude’s a champ. Plus, he’s so totally up for this shit it’ll be awesome. And in an ironic twist, his character will be called “Colossus”.

Writer: Anything else I should know?

Miller: I plan on making that last Fast & Furious film look like a children’s toy car playgroup compared to Mad Max. This film is going to be ferocious.

Producer: If only people will understand it.

Miller: Oh, they won’t need to. It’ll just be too cool for school being awesome and blowing shit up. I’ll do the press rounds saying stuff about “It’s all about survival” and people will catch my clever feminist themes and social subtext, but basically it’ll just me blowing shit up and killing stuff for two hours. And some cool-ass vehicles.