Director :   Brad Bird
Year Of Release :   2004
Principal Cast :   Voices of Craig T Nelson, Holly Hunter, Spencer Fox, Sarah Vowell, Jason Lee, Samuel L Jackson, Elizabeth Pena, Brad Bird, Bud Luckey, Wallace Shawn, Dominique Louis, Jean Sincere.
Approx Running Time :   115 Minutes
Synopsis:   A family of undercover superheroes, while trying to live the quiet suburban life, are forced into action to save the world.
What we think :  Dynamite action flick from Brad Bird and Pixar delivers family drama and sci-fi action with fun to spare. If you’re after a comic book movie to cleanse the palette from Avengers or Batman, The Incredibles is the one to bear. Pure, unadulterated fun, and it delivers in spades.

You know how Shrek came along and riffed enormously on the Disney Fairy Tale template, turning well-known characters from Grimms into comedic superstars? The Incredibles does the same thing to superheroes. It subverts the comic book genre, twists it into its own skewed version, and makes us think the characters in this movie have been around for years. While elements of this film have been tackled in comic books for years (specifically the heroes being more burden to the public than wanted by the populace), The Incredibles takes a well worn genre and turns it on its head, creating a brilliant symphony of character interplay that never feels forced or trite, and delivers large-scale action that pulses with tension and high-stakes outcomes. The Incredibles is… okay, I’ll say it… incredible.

After being forced into hiding by a government and population that can no longer support their destructive actions in the name of saving people, the world’s superheroes now live sedentary, bland existences among normal folks. One such family, the Parrs, have had a number of near-misses with discovery, although through agent Rick Dicker (Bud Luckey), they are able to be relocated without too much problem. Bob Parr (Craig T Nelson), formerly Mr Incredible, is married to Helen (Holly Hunter), herself formerly Elastigirl, and together they have two children: Violet (Sarah Vowell), who has powers including force-field generation and invisibility, and Robert Daschall “Dash” Parr (Spencer Fox) who is a speedster. When Bob is secretly asked to attend a mysterious island at the behest of Mirage (Elizabeth Pena), who is an underling for wannabe hero Buddy (Jason Lee), who wants to test his new machine against the world’s best heroes before unleashing it upon an unsuspecting public. Naturally, when Buddy’s plan starts to blossom, the world needs the formerly despised heroes, and so the Incredibles are sent into action to stop a catastrophe.

Like the best Pixar films, Brad Bird’s Incredibles is a film filled with multiple strands of subtext, subplot and narrative. On one hand, it takes a family dynamic and shapes it around each member of said family having superpowers, and having to keep that hidden from view, which would be nigh impossible considering how ubiquitous cameras and technology is these days. On the other hand, it’s a superhero fantasy writ large, as Bob and Helen (and to a lesser extent early, their kids) engage in all manner of heroism and derring-do, while cracking wise (a friend, the ice-powered Frozone, is wickedly played by Samuel L Jackson) before their world is brought crashing down. Bob and Frozone spend their nights cruising the city looking for hero work to do on the sly, while Helen is unaware of what her husband is up to.

This subtle play on spousal infidelity (technically, Bob isn’t sleeping around, but he’s fooling around with the fact that what he’s doing isn’t legal, and it’ll have serious repercussions on their family) and familiar boredom with a removal of excitement in the character’s lives. How would you handle going from living the superhero life to telling insurance customers their policy won’t be paid out, day in, day out? I know it’d make me go nuts, so somebody in Bob’s position is understandably frustrated by it all. He takes the offer of secret superhero work almost without question. 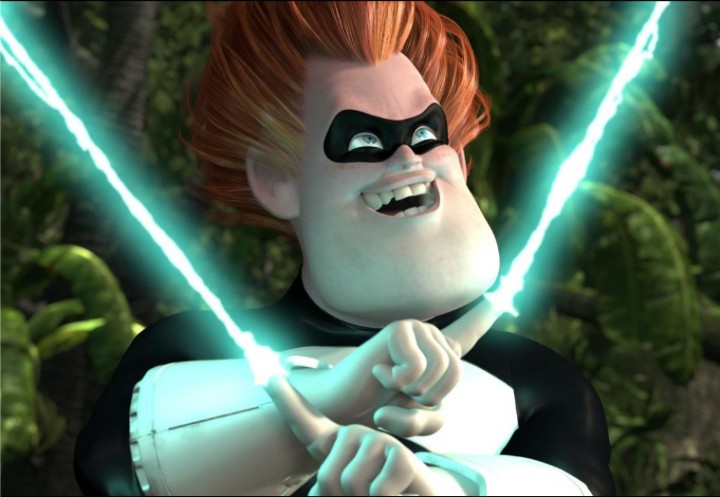 Then there’s the riff on superhero cliches – no capes, cries costume designer Edna Mode (Brad Bird) at one point, after designing a new set of costumes for the Parr family – and the casual parodying and evisceration of genre tropes that makes this film zing. Buddy, aka Syndrome, is the eponymous villain, borne of anger at the hero for not allowing him to become his sidekick, and who resents all the world represents when it comes to what superheroes should be. Jason Lee, a long-time associate of comic-book fan and writer (and film director) Kevin Clark, plays Buddy with the anger and repressed rage needed to sell the character, and it works superbly well.

Key to the film is the dynamic between Bob, Helen, and their kids. At a character level, you feel them as a family; they could be any of us, any family anywhere, only they have remarkable powers, but their internal struggles and battles are just the same as ours. Bob’s frustration, Helen’s stoic mother figure, and the kids’ rebellious natures and teen-speak flippancy are all honed to perfection; Bird directed The Iron Giant, and it’s fair to say a lot of that film’s positive work shines through here – strength of character development, and a rock-solid plot. Bird’s screenplay is hugely human, a deft examination on multiple elements of family bonds, social responsibility, and above all, doing the right thing. I still say Iron Giant is a better film from that perspective, but The Incredibles is slicker.

Indeed, The Incredibles features yet more stunning animation from the studio. For only the second time, Pixar presented a film in the scope aspect ratio (the previous one was A Bug’s Life) and the use of frame, editing and color is just dynamite. This is a beautiful film to watch, and it’s so good you could mute the sound and simply gaze in breathtaking gulps at the gorgeous tones and layers of texture within The Incredibles’ widescreen image. Yet, even though it’s supposedly grounded in realism, it’s unabashedly a cartoon comic book film. Reds pop off the screen once the family dons their familiar scarlet costumes, Syndrome’s blue force powers look painful, the green jungle of the island hideaway (which, I admit, reminds me of Doctor Evil’s obvious ones in Austin Powers…); everything about The Incredibles is so well designed, so well constructed and thought out, it’s hard to believe it exists entirely within a computer. The sequence involving Syndrome’s troops attacking Dash and Violet in the jungle, in which Dash runs across water being pursued by a disc-shaped machine driven by a henchman, is amazingly detailed, and filled with stunning 3-dimensional depth that makes you marvel continuously at the animation. 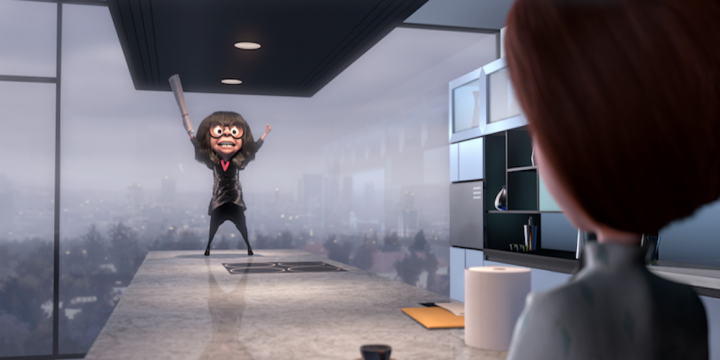 Another key aspect to The Incredibles’ success is its dynamite score by Michael Giacchino, a jazzy, snatch-crumple score that is all brassy trumpets and snare drums, mixed with traditional orchestrations. It’s a brash, classy, almost anti-heroic score (when was the last time you had jazz music accompanying Batman across Gotham’s rooftops?) and it fits the visual aesthetic to a T. While The Incredibles is ostensibly set in modern day, it has that 60’s infused flavor Bird gave to The Iron Giant, a gentle blend of old-new that is just like being wrapped in a warm blanket on a cold morning. Just gorgeous.

While I don’t think it’s quite as good as either Monsters Inc or Finding Nemo, The Incredibles is absolute dynamite entertainment from the enormously popular Brad Bird. The mixture of family drama and superhero fantasy is a delectable one, one that enables the viewer to embrace both the characters as “real” people, and the scenario as gently plausible. With stunning “comic book” animation and character design, a fabulous score, and some terrific plotting and voice work, The Incredibles is top-tier Pixar and a film that is as fun the fiftieth time as it is the first.