Unfortunately, Cars has a reek of overly familiar plotting to it: it’s a considerable step down from the studio’s vaunted creative benchmark, and as such, is one of the “lesser” films from Pixar’s famed canon. Harsh? Perhaps, but anyone who has ever watched a Michael J Fox movie called Doc Hollywood will attest, Cars doesn’t even try to hide its DNA from view, content to steal almost beat-for-beat the city-slicker-in-hick-town narrative made famous by that 80’s gem. Transposing the medical profession for Indy Car racing, Cars is slickly animated and, in the main, has its heart in the right place. But with six – yes, six – writers credited for the story and script, did nobody stop and think about how similar both films were?

This wouldn’t be such a problem if I was a kidlet when this film came out in 2006. Doc Hollywood’s main success came some twenty years prior, and youngsters watching this would have no basis whatsoever for comparison. But I, and you, do. Doc Hollywood saw Michael J Fox play Dr Ben Stone, a hotshot surgeon who becomes trapped in a backwater South Carolina town, only to find that what he’s been searching for in life has been in front of him the whole time. Cue Cars, which has Owen Wilson’s hotshot racing car, Lightning McQueen, who is traveling across country on the Interstate, when he becomes disoriented and lost in the small town of Radiator Springs, where he becomes trapped, until he discovers that what he’s been searching for in his life is right in front of him. Naturally, romance (in Doc Hollywood, it was Julie Warner’s Lou, and in Cars, it’s Bonnie Hunt’s lawyer-car Sally) and redneck humor abound.

Considering where Pixar came from, and how well they’d carved a niche for superb family entertainment out of their previous films – Toy Story, Finding Nemo, Monsters Inc, et al – it’s a bit of a shame that Cars comes along and ruins the streak. Director John Lasseter, who should know not to just outright steal the plot and concept of another high profile film, has a love of iconic American highway Route 66, which is now a tourist drive for ambulatory raconteurs to lovingly reflect on a bygone era, and he sought to give that melancholy wistfulness of the loss of these great “Small Town America” examples. Trouble is, in his quest to deliver that rose-colored tint story, mixed with high-octane racing sub-plotting, he’s used a story made famous elsewhere, and simply copy-and-pasted from that playbook almost note for note. This is particularly disappointing when you think how new and fresh Pixar’s features had been until this point. 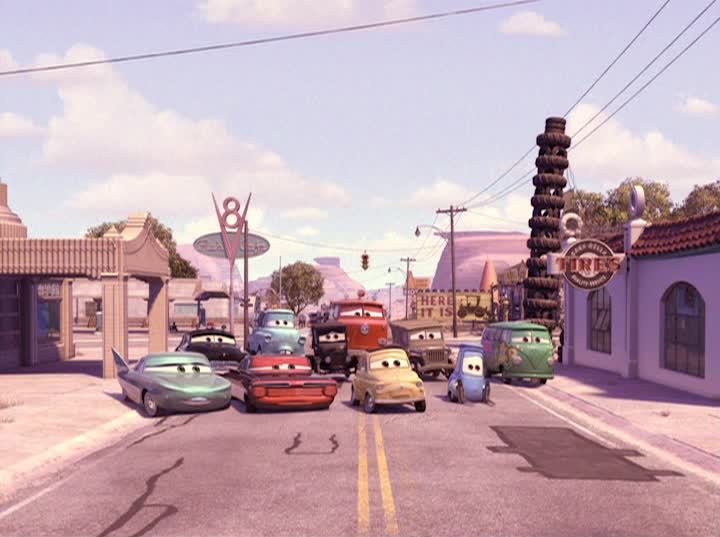 Okay, leaving aside obvious plagiarism for a moment (it’s worth noting that Doc Hollywood wasn’t entirely original either, and was based on a novel by Peter Seaman called “What? Dead… again?”) Cars is a beautifully rendered, and lovingly crafted piece of animated glory. From its flawless character design and world-building beauty, everything about Cars just drips with the attention to detail Pixar has become renowned for. Cars is set in a world where humans have been supplanted by vehicles. Cars are the humans of this film’s universe – sometimes that works, and other times it’s a bit “what the?”… Exactly why cars would build things the same way humans do doesn’t quite make sense, and much of the underpinning thought processes don’t do enough to sway this issue completely.

The characters are all lovely to watch go round. Lightning McQueen’s arrogance and eventual realization that the world doesn’t revolve around him is brought to life perfectly by Owen Wilson’s vocal delivery – not quite the guy I thought to play the role, but hey, it works! – while his rapport with Bonnie Hunt, who plays his on-screen love interest Sally, is excellent. Paul Newman’s grumpy, resentful Doc, who presides over the town as the local magistrate, and who is himself a former race car, draws some minor laughs but provides much of the film’s soul, and Larry The Cable Guy, better known as a radio personality and stand-up comedian, has a blast as Mater, the towtruck with a heart ‘o gold but the brain of a potato.

The rest of the film is a smattering of spot-on voices. Cheech Marin bobs in as a Chevy Impala with inflatable struts and flame paintjob, Ramone. George Carlin plays a perpetually stoned hippie VW bus, while Tony Shalhoub plays Luigi, the owner of a tyre shop and assisted by Guido, an uber-quick forklift with whom he shares a love of European vehicles. The late Joe Ranft plays Red, a blubbering mess of a firetruck, in his last vocal role before his untimely death in 2005. There are numerous racing celebrity cameos in various voices, from the eponymous commentary team to the pit crews, and even legendary driver Michael Schumacher makes an appearance.

So with the animation and the vocals as perfect as any other Pixar film, how come Cars sits below many of the others in the pantheon of the studio’s output? Personally, I think it’s a combination of the “cars as people” motif and the considerably brazen use of Doc Hollywood’s thematic template, something older viewers will find jarring. No doubt kids who grew up with this film will one day watch Doc Hollywood and say “hey, this is the same plot as Cars” with ignorant wide-eyed amazement. Cars looks the goods, and has both a ripping sound mix and a solid soundtrack, and the story of a smart alec car learning the meaning of life is one that suits the Pixar demographic down to a tee. But for the life of me, I can’t see much past the plagiarism of the plot. And I find that the most galling thing about Pixar’s attempt at this love-letter to Rote 66’s place in American history.