Director :   Paul Tibbitt
Year Of Release :   2015
Principal Cast :  Antonio Banderas, Voices of Tom Kenny, Clancy Brown, Bill Fagerbakke, Mr Lawrence, Caroline Lawrence, Rodger Bumpass, Matt Berry.
Approx Running Time :  92 Minutes
Synopsis:   Spongebob and his friends have to save their work from the nefarious plans of a diabolical pirate, who wants the secret Krabby Patty formula all to himself.
What we think :  Zany, whacky, crazy; all words to describe Spongebob Squarepants and his second feature film as it skits between parody, non-sequitur and witless inanity with the abandon of care we’ve come to expect. With both excellent 2D animation, some spectacular 3D CG and live action footage, Sponge Out Of Water is a breathlessly paced venture into the psychedelic world of the planet’s greatest living animated underwater character.

One of the problems I had with the first Spongebob Squarepants movie was its over-reliance on the lead character and his gormless chum Patrick (the fat pink starfish) and the reduction of the franchise’s supporting cast, namely Mr Squidward, Sandy and Mr Krabbs, to bit-parts or minor cameos. The television series works best when the regular cast are front-and-center, and the first film seemed hell-bent on avoiding that to make a sweet-but-sour road movie. The second Spongebob movie, subtitled Sponge Out Of Water, reverses this and sticks all your favorites right in the main frame almost entirely, including Krabbs’ arch-nemesis Plankton, who is once more the catalyst for all the animated insanity going on here. Blessedly, Sponge Out Of Water is justifiably better as a film experience, but shortcomings in the franchise overall remain. 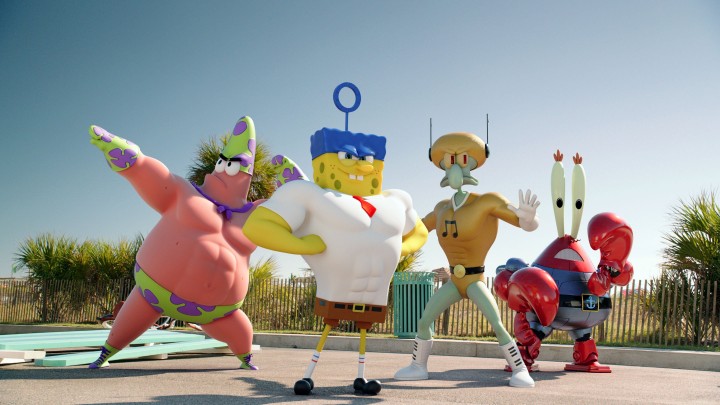 Above the ocean, a pirate, Burger-beard (Antonio Banderas) lands on Bikini Atoll to steal a book on whose pages the writing comes true. Below the surface, Plankton (voice of Mr Lawrence) is once again trying to steal the secret recipe for the Krusty Krab’s famous Krabby Patties, a plan thwarted by owner Mr Krabbs (Clancy Brown), his fry-cook Spongebob (Tom Kenny), and Spongebob’s best friend Patrick (Bill Fagerbakke). At a crucial moment, the recipe just vanishes, leading to social breakdown throughout Bikini Bottom. Plankton and Spongebob build a time machine to travel back and stop Plankton’s plan from ever happening, but in doing so cause serious ruptures in time and Burger-beard’s plan to take the secret recipe for himself manifests with his pirate ship becoming a lunch cart on a beachside boardwalk. As Burger-beard attempts to write his own legacy, Spongebob and his friends take to the surface to claim back what is rightfully theirs.

Look, it’s fairly obvious who this film is aimed at. If you’re not already a fan of the ubiquitous absorbent underwater freakshow, Sponge Out Of Water won’t do much to change your mind. It’s a fan-zone friendly work of utter lunacy, as Spongebob, Patrick, Squidward, Plankton and all the rest engage in all manner of childish comedy, most of which works (and some which does not), as they race to get the film’s MacGuffin (a secret recipe along the lines of the KFC Colonel’s secret herbs and spices) back from Antonio Banderas. It’s something telling, though, when Banderas is actually one of the best parts of the film, as a raggedy pirate with a single-minded Looney-Toons motivation for his plans.

Don’t get me wrong, I chuckled enormously with this film, but I didn’t bust an absolute gut like I have with the previous film or the television series. Moments of genius – the “out of water” element of Spongebob’s arrival above the surface of the ocean, as genuine 3D avatars made “real”, is a particular standout – abound, but they’re negated by weird story beats (dolphins in space?) that offer little comedy and even less story propulsion. Good with the bad, though, and Sponge Out Of Water succeeds enormously in spite of its fairly insular fan service. 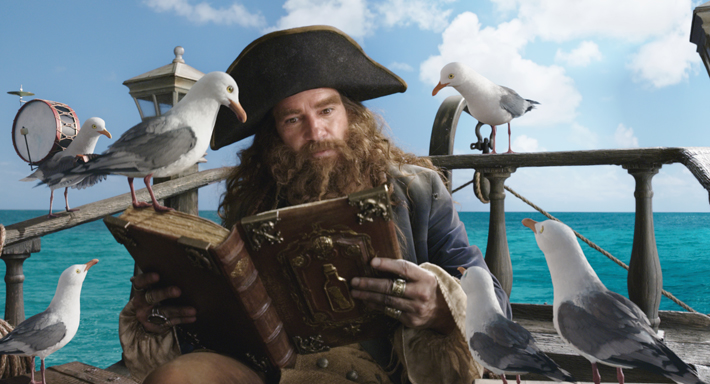 Written (although I doubt there was a single script more than there was a round-table of riffing and just making shit up) by animated film alumni Jonathan Abiel and Glenn Berger (they’ve scribed the Kung Fu Panda franchise, as well as Monsters Vs Aliens, the second and third Alvin & The Chipmunks movies, and the upcoming Monster Trucks) is a flat-chat laugh-a-thon, ripe with slapstick, the non-sequitur, double entendres and Spongebob’s now legendary sense of fantastical insanity. It’s an often psychedelic trip beneath the waves yet again, although the animation is cleaner, the production values obviously heightened, and the farcical nature of the story lends itself to the real younger kids having an absolute blast. The “time machine” moments, with Spongebob and Plankton creating the worlds first Photo Booth Vortex Device, is a real rub-tickler, while the film’s key chase between Banderas and the band of heroic undersea friends is marvelously inventive.

But it’s not without flaw. The film’s opening third does drag, sometimes badly. Soliloquies and monologues, as well as a rather flat-footed sense of plotting in the opening act, leave the film mildly uneventful for minutes on end (even the humor runs aground at times) but as with any good farce, it all picks up and gathers pace late in the game to come barnstorming home. The voice work is stellar, Banderas has a blast (he’s so in on the joke it looks like he’s been doing this kind of thing for ages) and the animation, both 2D and CG, is top-tier. If it’s a dash of silly underwater shenanigans you’re after, and an undemanding rocket-ride of fun and funny, give Sponge Out Of Water a crack, you won’t regret it.