I know what you’re thinking. How did a confirmed advocate for Adam Sandler’s film career coming to a crashing halt immediately end up reviewing The Cobbler? Especially so soon after the wretched and abysmal Blended, a film I am still washing the bad taste of out of my mouth? Truth be told, The Cobbler’s trailer utterly sold me – a man who can inhabit the likeness of another person simply by wearing that person’s shoes, I mean how can this not possibly be everyone’s fantasy? Even in spite of Adam Sandler’s role in this, I thought it was worth a look, primarily based on the trailer. 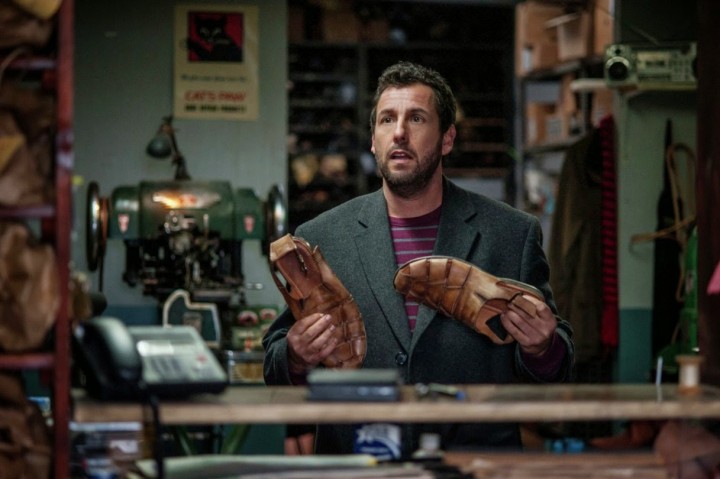 Sandler plays Max Simkin, a hapless, fourth generation cobbler in New York’s lower east side who discovers a magic shoe-repair machine in his basement that can allow him to transform into the body of those people who own the shoes. Using this power, Max straddles the line between wanton fantasy wish-fulfillment, as he enjoys the lives of others through vicarious illicit “body stealing”, and making his elderly mother (Lynn Cohen) feel better as he assumes the figure of his deceased/missing father (Dustin Hoffman). But his chickens come home to roost through the actions of a local activist (Melonie Diaz) who wants the district to remain “development free”, and local hoodlum Ludlow (Method Man), leading to a confrontation with property owner Elaine Greenwaldt (Ellen Barkin), who wants an old man out of his apartment building. 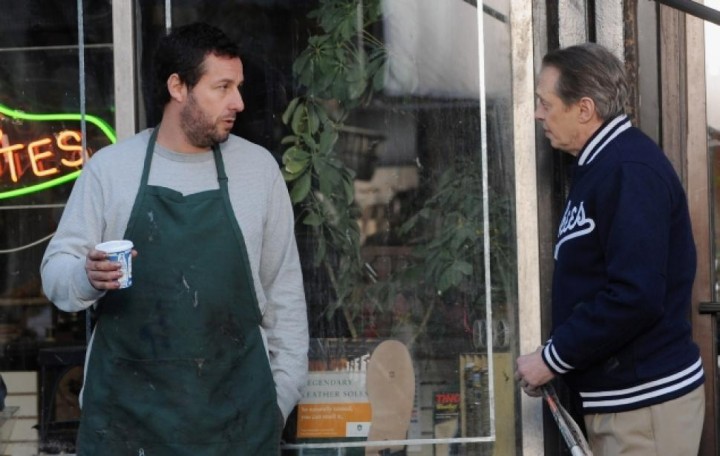 I’ll wear this: The Cobbler isn’t fantastic, but hell if I had a bit of a smile on my face throughout its entirety. It gets a little dumb, takes its sweet time getting anywhere significant, and smothers a bit of cloying sentimentality throughout its lite-weight fable-narrative, but overall has a charmingly little low-key sensibility I actually enjoyed. Before you go rolling your eyes questioning my sanity about any film featuring Adam Sandler, yes, I felt the same as you: what right has the world’s most unfunny comedian got being in a film I actually liked? 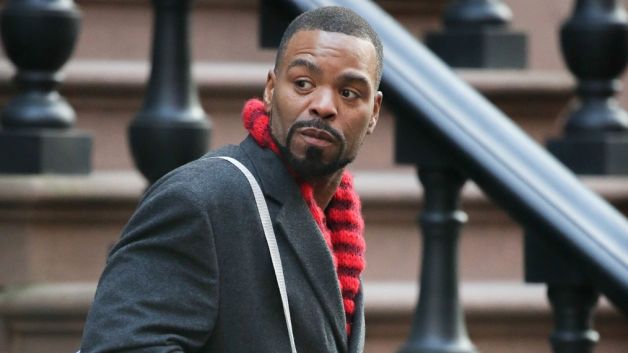 What I appreciated most about The Cobbler is that Sandler goes a long way restraining that outlandish juvenile humor he’s renowned for (ha!), and makes this a film actually worth watching. His schlubby, downtrodden schtick is nicely attenuated to making his character here quite likeable, even in an underdog kinda way that normally I’d find tiresome. Simkin is just an everyman Joe, he’s not the kind of heroic figure you’d normally associate with this kind of movie; he’s eminently relatable, and although Sandler doesn’t technically appear through the entire film (but in spirit, since he’s inhabiting the bodies of others….. ahh, you’ll get it if you see it) the actors playing “him” do a solid job of conveying Max’s confusion, resolute sense of duty, and above all, his spirit. 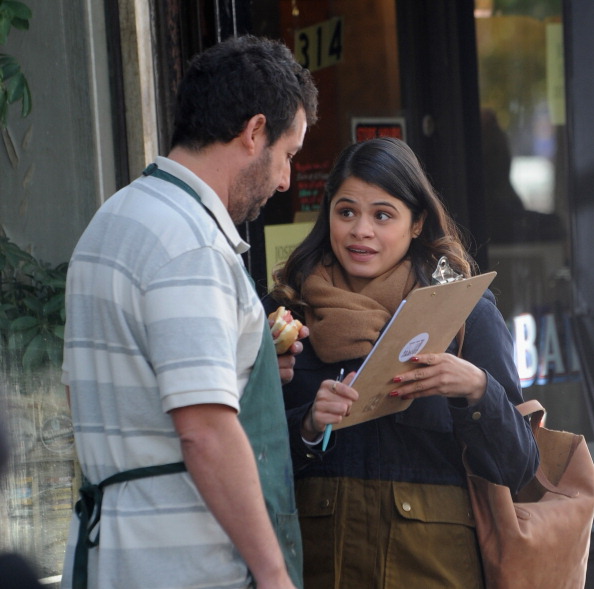 The supporting cast, led by Method Man in a performance I admired for its resistance to conformity, are uniformly excellent. Even Ellen Barkin, whom I normally find grating and irritating, is suitably menacing here, as a ruthless property tycoon out to make some money. Steve Buscemi, as Max’s next-door barbershop business proprietor, Jimmy, is excellent, while indie-film darling Melonie Diaz (check out Be Kind Rewind for more of her, yummo!) does a great job as Max’s potential romantic interest. 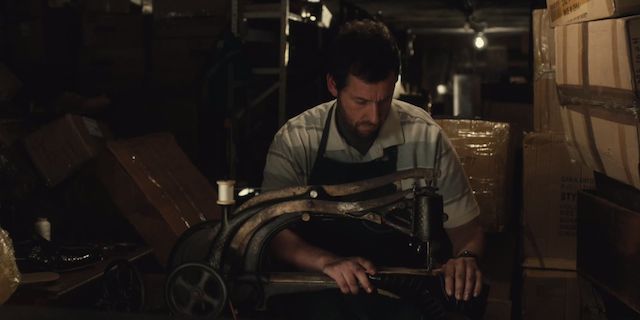 The Cobbler is directed by actor-slash-director Tom McCarthy. McCarthy (best known to audiences for his recurring role of Dr Bob in the Meet The Parents franchise) gives this film a really kooky flavor (Dustin Hoffman’s extended cameo is particularly sweet-natured) and evokes a nice suburban feeling throughout the movie, even with its setting being one of the worlds busiest cities. Co-written by Paul Sado, McCarthy’s script injects the “what if” desire of living vicariously through assuming the identities of others, and how much good could be achieved if it could happen. Okay, so a magical cobbling machine wouldn’t have been my first choice (a fact vacated towards the end of the movie anyway, I might add) but it works a nice little je nes se quois into the scenario that just clicks. It’s a film you’d describe as “sweet”, or maybe “innocent”, were it not for some of the reprehensible people Max meets within the narrative. Still, for a charming little palette cleanser away from the blockbusting crowds, The Cobbler will suit you perfectly. 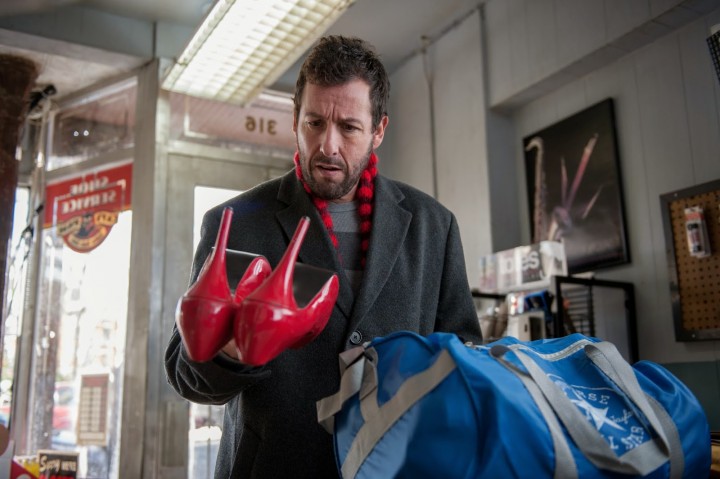 Look, I’m trying not to think of a number of shoe-related jokes I could use to close out this review. Trying, and failing. This film is a soleful, beautifully laced, perfectly heeled fantasy drama (with more than a dollop of lite comedy) that feels like a sweet pair of slippers going on well-trod feet after a hard days work. It’s unassuming, largely devoid of explosions or really any significant problematic thematic material other than allusions to organized crime and a scene involving torture, and I kinda think most young kids today will wonder what’s wrong with Adam Sandler for appearing in it; The Cobbler is a nice little film that does its job, gets out without fuss, and never overstays its welcome. If Sandler made more films like this, he’d be doing us all a favor.