To celebrate the phenomenal success of Wyrmwood: Road of The Dead, Fernby Films sat down with several of the cast and crew members for a quick chat about the film. If you haven’t seen Wyrmwood yet, there’s some spoilers in this interview, so please check back here after you’ve seen this brilliant film.

Brent Cannon was an extra for Wyrmwood’s bush scenes, playing one of the zombie horde. He gave us an insight into what it’s like working on a low-budget film like Wyrmwood, how he worked on the set, and the pros and cons of being an extra.

FF: Hi Brent, thanks for taking the time to chat to us today. Can you tell us your role on the film, and how you came to be in it.BC: My role in Wyrmwood was to be an extra. The extra role was being a zombie, making the loudest and ugliest noises I could. It all started when I met a stuntman on a cruise to New Zealand that taught me how to do basic party tricks. When I returned home from the cruise, I kept in contact with Jesse (the stuntman), and over a year later he mentioned he was a stunt coordinator for an up and coming Aussie Zombie Apocalypse movie. I asked if he needed any extra work (acting or catering), and to my luck I was offered an extra role, to play a zombie.FF: As an extra on the film, you must have spent a bit of time standing around waiting for your turn to perform. Have you had previous film experience or was this your first time, and how did you find the experience?BC: Over 3 days of filming, I spent about 40 hours on set, pretty much taking advantage of all possible light, and when needed, taking advantage of the night. There was a little bit of sitting around, but it wasn’t all too bad, because when the extras were standing around, we were 5 metres away from the main actors doing their scenes. When it would get close to the zombie scenes, it was all about psyching each other up to get the adrenaline pumping, to the point where we felt like eating someone… Hahaha. The only other acting experience I’ve had was year 11 and year 12 Drama, but that didn’t prepare me to play a zombie. I loved working with the Wyrmwood Cast and Crew. As tiring as it was, I would do it all over.

FF: So, zombie makeup application: awesome or shitty? Why?

BC: Overall, it was awesome, but it was shitty at times. When the makeup was applied to my face it was awesome to slowly see the transition my face and body went through, to look like a flesh eating cannibal. What made it shitty was having to remove the makeup, as it was glued to my face, hahah. The feeling of having my eyebrows and eyelashes being ripped off my head wasn’t good! Though, it was totally worth it.

FF: Can we assume you’re a fan of the zombie genre?

BC: When I heard I could possibly play the role of a Zombie in a movie, was probably the best thing I’ve ever been asked. From the Resident Evil franchise, The Walking Dead, anything zombie in it, tickles my fancy! Though, my favourite Zombie flick would have to be, Zombieland! What else is hotter than watching Emma Stone kill zombies. I’d let her kill me any day!

FF:  What was it like shooting on location? What time of the year did you shoot, and how did you battle the weather?

BC: During the time I was their for filming, it was right in the middle of winter, in the middle of the bush in Kellyville, Sydney. When filming at night and having little clothing on (wearing tattered clothing), the only way to battle the cold was everyone gathering around a small electric heater to keep warm. 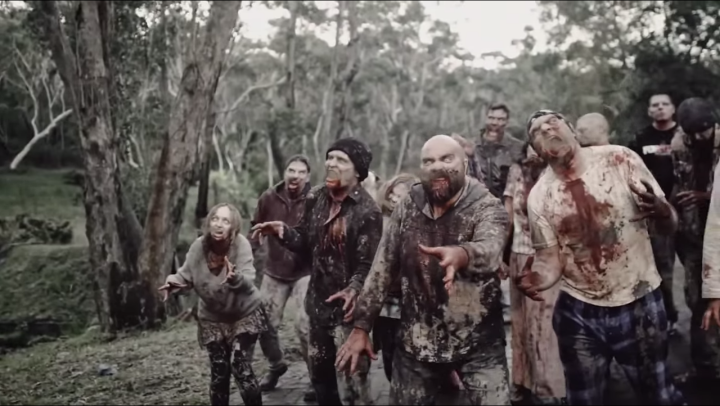 FF: Did you know, or spend much time with, your fellow extras?

BC: The weekend I was there for filming, I was there with myself and three other zombie extras. Other than the extras, I was fortunate to get to know Jay (Barry), Leon (Benny), and Keith (Frank) and get to hang out them and talk about their experiences.

FF: On a standard day of shooting, what was your schedule like?

BC: For the day, there was a timetable set up for different times of the day, where and when different possible scenes would be shot. At some points, Kiah would pretty much say, ‘who wants to get bloody, and get shot?’. I tried my best and attempted to be in all of those!

FF: You’re aware that your appearance has now spread internationally, with the film getting rave reviews in both the US and UK (among others). Would you be keen to reappear in any potential sequel, and have you heard anything about when/if that may be happening?

BC: The thought that’s hundreds of thousands of people have seen me being urinated on, is awesome, hahaha. Seriously though, when I first heard about this film being made, I didn’t know a single person that knew about the movie. It’s amazing to actually see all the hard work that all the cast and crew put into this paid off to a huge extent, plus more! I knew it was going to be big, but not internationally huge! I’d like to think it was all because of me, because who doesn’t want to see a zombie being pissed on and shot in the face!! IF there is a sequel/another film and I’m around town when filming is going on, id love to show my face for round 2.

FF: If there was a sequel, would you be a zombie again, or would you return as someone, or something, else?

BC: Hmm, tough one… I’d be more than happy to be another zombie, but it would also be cool to be that character that everyone hates, and when he finally gets, ‘bitten’ everyone in the cinema cheers! Though, I’s ends up biting the Loved character and everyone hates me even more!

FF: Brent, thanks for sharing with us today. Congratulations on the film’s success, and good luck with your future acting endeavors!